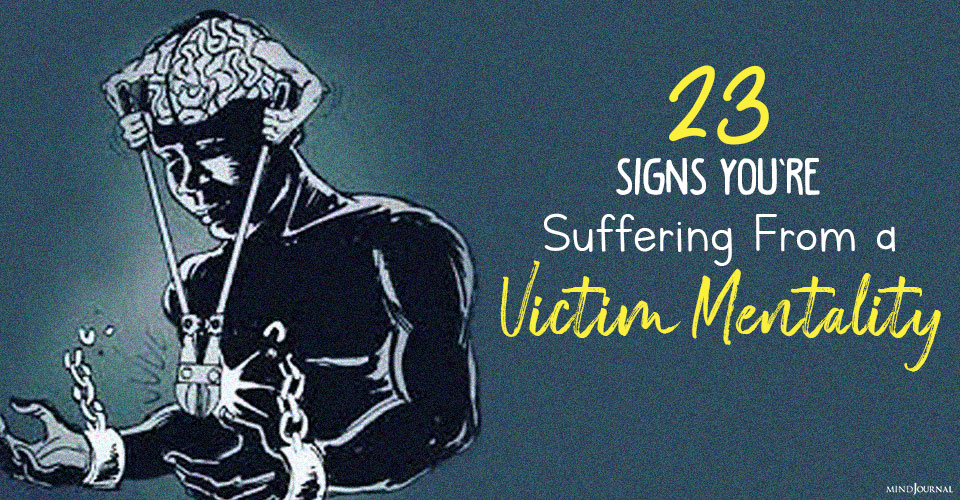 It’s only natural to face challenges in life, but when life’s difficulties come knocking at your door, do you take the responsibility for them, or do you blame everything and everyone around you?

When we have a victim mentality, we filter our entire existence through a paranoid narrow mental lens that is used to perceive other people and reality.

While it’s important to claim the role of a victim if we have genuinely been victimized or abused, we cannot move on with our lives unless we step out of the victim role and into the survivor role.

What is a Victim Mentality?

Victim mentality is a psychological term that refers to a type of dysfunctional mindset which seeks to feel persecuted in order to gain attention or avoid self-responsibility.

People who struggle with the victim mentality are convinced that life is not only beyond their control, but is out to deliberately hurt them. This belief results in constant blame, finger-pointing, and pity parties that are fuelled by pessimism, fear, and anger.

Simply put, having a victim mentality means that you blame other people and circumstances for the unhappiness you feel.

Most victims were victimized in some way as children, whether that was through physical abuse, sexual abuse, emotional abuse, or psychological abuse. Self-victimization can also develop through the codependent relationships we had with our parents, or simply by observing and adopting the unhealthy victim mentality exhibited by one or more of our family members.

However, although what happens to us as children is completely beyond our control, it is our responsibility as adults to step into our power and reclaim responsibility for our happiness.

Read 5 Signs That You Are A Victim Of Envy

9 Benefits of Being a Victim

Playing the victim actually has a number of juicy perks. These rewards make it very difficult to break out of such a mindset, which is why most victims seem to be so emotionally invested in perpetuating this type of toxic behavior.

Some of the perks include the following:

Can you see some underlying patterns starting to emerge here?

The Dark Side of Playing the Victim

The majority of people who play the victim do so unconsciously, or unintentionally. Even so, the victim role does involve a tremendous amount of manipulation and string-pulling. People in relationships or friendships with victims often report feeling like puppets who mold into whatever the victim believes they are or wants them to be.

Having other people feel sorry for you is an easy way to wrap them around your little finger. This unconscious craving to control others through their sympathies is really only a way for the mind to reinforce its belief in the “I’m a victim” ego identity.

There is a lot of comforts and artificial “safety” in playing the victim’s identity. Not only does it reward you with not having to take responsibility for any of your behavior (because “other people” are always responsible), but it also prevents you from feeling uncomfortable emotions like guilt and anger, while at the same time making you feel “cared for” by others.