13 Signs You Are Sleeping With a Narcissist 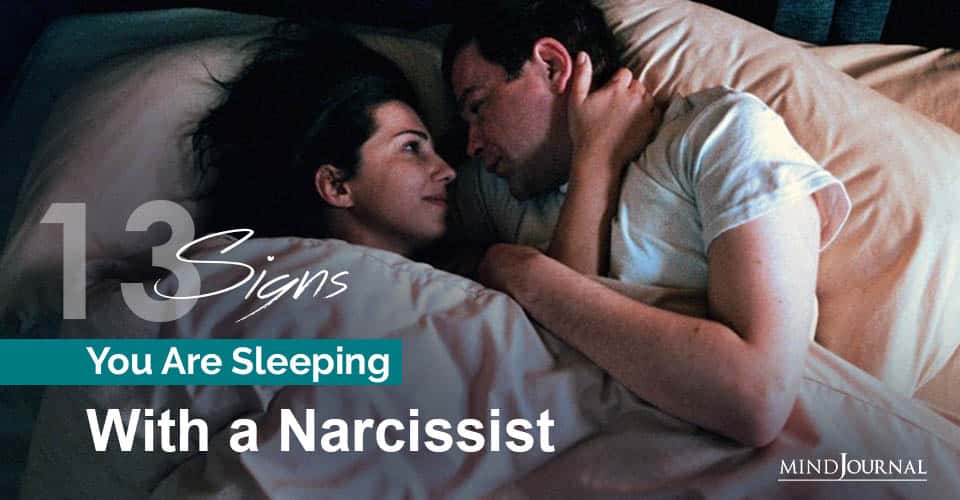 Are you sleeping with a narcissist?

Making love is vital to a healthy relationship. In the hands of a narcissist, it can be used to have power and control over a person as opposed to strengthening an intimate connection.

Sometimes, people can be confused by the signs that a person is sending while making love, and may discount the body language and the signals as something else.

Here are signs to look for when sleeping with a narcissist, a dangerous and manipulative individual.

Typically done in the beginning of the relationship, a narcissistic partner will get as much information from you about your fantasies so that they can work hard to fulfill them.

Thus, your partner will pay extra special attention to your body language, the signals that you give them to let them know that you like what they are doing in bed. This information is what they will use as a leverage against you later when they decide to withhold it from you or against you.

2) It is the worst that you ever had.

Making out can go from one extreme to the other. It usually becomes bad when the narcissistic partner has decided to withdraw from the relationship, has another partner, or wants to use it as a method of punishment or control.

Typically, they will only focus on fulfilling their needs and be physical with you on their terms, which can make the other partner turn into the aggressor for it. When they finally give in and you get to be physical, you are so grateful for it that you accept it.

However, they are angry or ready to withdraw from the relationship, that they make sure that ‘the act’ will be degrading, painful, lackluster, or impersonal.

In another scenario, there are narcissistic partners that are lackluster in the bedroom from the beginning. Partners like this are only focused on fulfilling their own bodily needs, thus their performance reflects this. While being physical with partners like this, you will often feel like a ragdoll who has no other purpose except to be there.

It is not uncommon for a narcissistic partner to try and initiate making out without using birth control. Even if you have explicitly discussed using a birth control right before it, narcissistic men will attempt it without putting on some protection, and often without warning.

When you attempt to correct this behavior, they will often complain or minimize stating “I made a mistake,” or “I just wanted to try it without that,” or “I don’t like it that ways.” They may even refuse to continue making love because you are setting a boundary with them that they don’t like.

Related: 12 Signs You Are Married To A Narcissist

With female narcissists, they will lie about their use of birth control and refuse to use other forms of birth control options during ‘the act’. Females such as this, are highly likely to try and trap men by getting pregnant in order to be in a relationship or for financial gain.

Dr. Natalie Jones, PsyD, LPCC currently works as a prison psychologist providing assessment and counseling to inmates, and also has a private practice in Oakland, CA where she works with those who have been hurt by love and abuse in relationships with narcissists. In addition, Dr. Jones specializes in being an expert witness in legal cases, does consultation and coaching for victims of narcissistic abuse, public speaking engagements, and also has a podcast called A Date With Darkness Podcast, which provides education, tips, and intimate discussion for those who have been victims of abuse. If you want to find out more about or get in touch with Dr. Jones, please visit her website www.drnataliejones.com, subscribe to the newsletter, and be sure to listen to the podcast.View Author posts