Shadow Work: How to Let Your Demons Guide You

That damaged part of you that you hide from the world – it needs healing too! Learn how to heal yourself through Shadow Work. ❤

“We ALL carry demons inside. Shadow work is the attempt to uncover everything that we have disowned and rejected within our Shadow Selves. Our Shadow Self is our darker half, alter ego or “evil twin.” 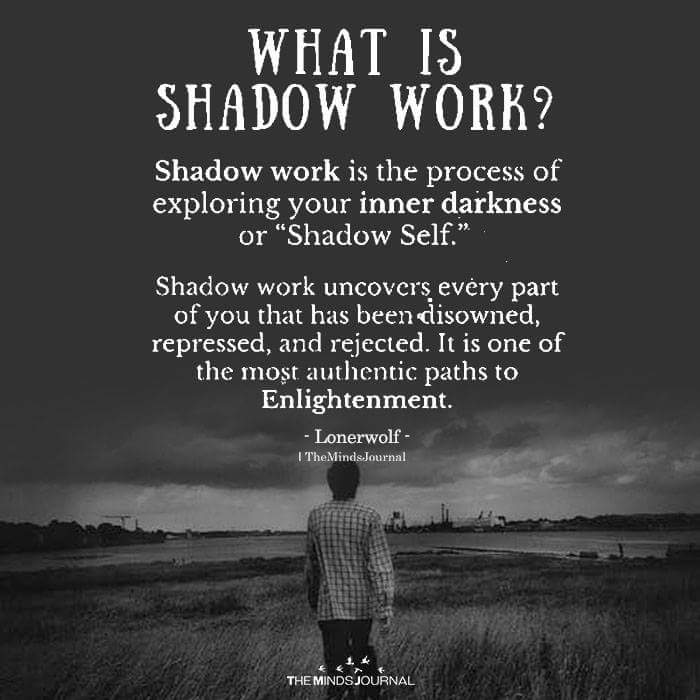 All of us carry demons inside. Sometimes we catch fleeting glimpses of them, sometimes we witness them in full frontal chaos, but for the most part, we ignore and bury their existence either out of fear, guilt or pure shame. However, discovering and owning our demons is a vital part of our spiritual journey. 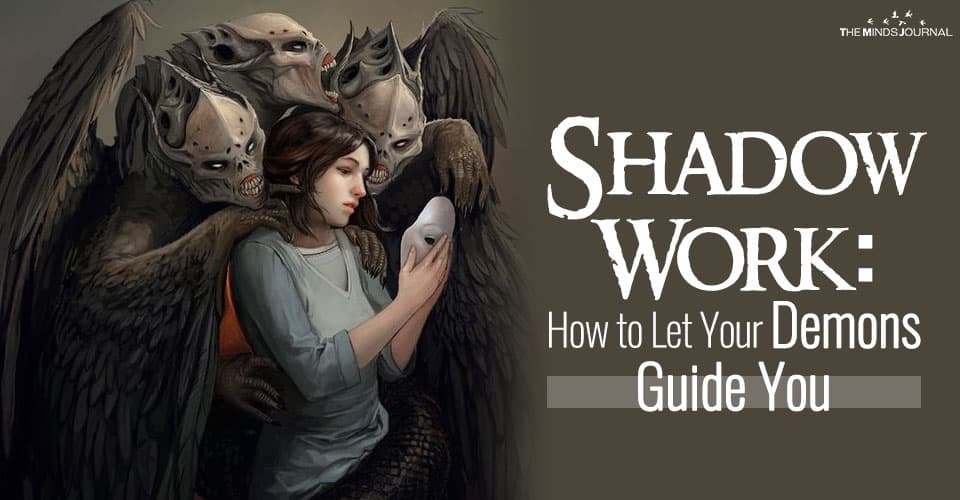 Beneath the social mask we wear every day, we have a hidden shadow side: an impulsive, wounded, sad, or isolated part that we generally try to ignore. The Shadow can be a source of emotional richness and vitality and be acknowledging it can be a pathway to healing and authentic life.

In other words, the Shadow isn’t just the wounded part of us, but it is also the path towards a more authentic and fulfilling life. In order to repair, heal, and grow on a mental, emotional, and spiritual level, we need to practice Shadow Work.

Shadow Work is a practice that helps us to become whole again. It works on the premise that you must 100% OWN your Shadow, rather than avoiding or repressing it, to experience deep healing.

This daunting and often frightening task is a requirement of every person. But you don’t have to go at it alone.

In this long and detailed guide, I will offer you a helping hand. Having studied and worked with the Shadow for years, I’ll share with you some of the best tools, insights, and advice that I have gathered thus far.

Why Focusing Only on the Light is a Form of Escapism

For most of my life, I’ve grown up firmly believing that the only thing worthy of guiding me was “light” and “love.” Whether through the family environment I was raised in, or the cultural myths I was brought up clinging to, I once believed that all you really needed to do in life to be happy was to focus on everything beautiful, positive and spiritually “righteous.” I’m sure you were raised believing a similar story as well. It’s a sort of “Recipe for Well-Being.”

But a few years ago, after battling ongoing mental health issues, I realized something shocking:

Not just wrong, but completely and utterly off the mark. Focusing only on “love and light” will not heal your wounds on a deep level. In fact, I’ve learned through a lot of heavy inner work, that not only is focusing solely on “holiness” in life one side of the equation, but it is actually a form of spiritually bypassing your deeper, darker problems that, let me assure you, almost definitely exist.

It is very easy and comfortable to focus only on the light side of life. So many people in today’s world follow this path. And while it might provide some temporary emotional support, it doesn’t reach to the depths of your being: it doesn’t transform you at a core level. Instead, it leaves you superficially hanging onto warm and fuzzy platitudes which sound nice, but don’t enact any real change.

What DOES touch the very depths of your being, however, is exploring your Shadow.

What is the Human Shadow?

In short, the human shadow is our dark side; our lost and forgotten disowned self. Your shadow is the place within you that contains all of your secrets, repressed feelings, primitive impulses, and parts deemed “unacceptable,” shameful, “sinful” or even “evil.” This dark place lurking within your unconscious mind also contains suppressed and rejected emotions such as rage, jealousy, hatred, greed, deceitfulness, and selfishness.

So where did the Shadow Self idea originate? The concept was originally coined and explored by Swiss psychiatrist and psychoanalyst, Carl Jung. In Jung’s own words:

Everyone carries a shadow, and the less it is embodied in the individual’s conscious life, the blacker and denser it is.

When the human Shadow is shunned, it tends to undermine and sabotage our lives. Addictions, low self-esteem, mental illness, chronic illnesses, and various neuroses are all attributed to the Shadow Self. When our Shadows are suppressed or repressed in the unconscious long enough, they can even overtake our entire lives and causes psychosis or extreme forms of behavior like cheating on one’s partner or physically harming others. Intoxicants such as alcohol and drugs also have a tendency to unleash the Shadow.

Thankfully, there is a way to explore the Shadow and prevent it from devouring our existence, and that is called Shadow Work.

What is Shadow Work?

Shadow work is the process of exploring your inner darkness or “Shadow Self.” As mentioned previously, your Shadow Self is part of your unconscious mind and contains everything you feel ashamed of thinking and feeling, as well as every impulse, repressed idea, desire, fear and perversion that for one reason or another, you have “locked away” consciously or unconsciously. Often this is done as a way of keeping yourself tame, likable and “civilized” in the eyes of others.

Shadow work is the attempt to uncover everything that we have hidden and every part of us that has been disowned and rejected within our Shadow Selves. Why? Because without revealing to ourselves what we have hidden, we remain burdened with problems such as anger, guilt, shame, disgust, and grief.

All throughout the history of mankind Shadow Work has played a powerful yet mysterious and occult role in helping us discover what is causing us mental illness, physical dis-ease and even insanity resulting in crimes of all kinds.

Traditionally, Shadow Work fell in the realm of the Shamans, or medicine people, as well as the priests and priestesses of the archaic periods of history. These days, Shadow Work falls more commonly in the realms of psychotherapy, with psychologists, psychiatrists, spiritual guides, and therapists.

Do We All Have a Shadow Self?

Yes, we ALL have a Shadow Self. As uncomfortable as it may sound, there is a dark side within every human being. Why is this the case? The reason why all human beings have a shadow is due to the way we were raised as human beings, often referred to as our ‘conditioning.’ (We’ll explore how the Shadow is formed next.)

“But I’m a good person! I don’t have a ‘shadow’ side,” you might be thinking. Well, the reality is that yes, you might be a good person. In fact, you might be the most generous, loving, and selfless person in the entire world. You might feed the hungry, save puppies, and donate half of your salary to the poor. But that doesn’t exclude you from having a Shadow. There are no exceptions here. The nature of being human is to possess both a light and a dark side, and we need to embrace that.

Sometimes, when people hear that they have a Shadow side (or when it is pointed out), there is a lot of denials. We have been taught to perceive ourselves in a very two-dimensional and limited way. We have been taught that only criminals, murderers, and thieves have a Shadow side. This black and white thinking is one of the major causes of our suffering.

“I’m not like those people, I’m better.”
“I have never strayed.”
“God is proud of me.”
“Criminals and wrongdoers aren’t human.”
“Everyone sees how good I am (even so, I have to remind them).”
“I’m a role model.”
“I should be validated and applauded for my good deeds.”
“I don’t have bad thoughts, so why do others?”

Such perceptions about oneself are unrealistic, unhealthy, and largely delusional. The only way to find inner peace, happiness, authentic love, self-fulfillment, and Illumination is to explore our Shadows.

How is Our Shadow Side Formed?

Your Shadow side is formed in childhood and is both (a) a product of natural ego development, and (b) a product of conditioning or socialization. Socialization is the process of learning to behave in a way that is acceptable to society.

When we are born, we are are all full of potential, with the ability to survive and develop in a variety of ways. As time goes on, we learn more and more to become a certain type of person. Slowly, due to our circumstances and preferences, we begin to adopt certain character traits and reject others. For example, if we are born into a family that shows little interpersonal warmth, we will develop personality traits that make us self-sufficient and perhaps standoffish or mind-oriented. If we are born into a family that rewards compliance and shuns rebellion, we will learn that being submissive works, and thus adopt that as part of our ego structure.

Aletheia Lunahttp://Lonerwolf.com
Aletheia Luna is an influential spiritual writer whose work has changed the lives of thousands of people worldwide. After escaping the religious sect she was raised in, Luna experienced a profound existential crisis that led to her spiritual awakening. As a spiritual counselor and professional writer, Luna's mission is to help others become conscious of their entrapment and find joy, empowerment, and liberation in any circumstance. See more of her work at lonerwolf.com
- Advertisment -