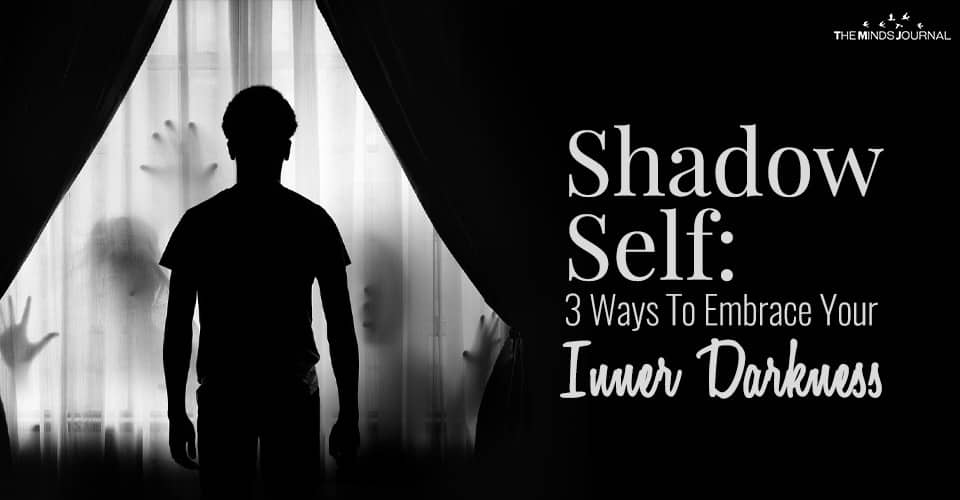 Do you believe that you should denounce your “dark thoughts” in order to pursue “love and light”? The following article tells you how this approach is pushing you away from your authentic self and how your shadow self can help fix this problem!

“Beneath the social mask we wear every day, we have a hidden shadow side: an impulsive, wounded, sad, or isolated part that we generally try to ignore. The Shadow can be a source of emotional richness and vitality and acknowledging it can be a pathway to healing and an authentic life.” – C. Zweig & S. Wolf

If you’re truly honest about growing, changing, and living life to the fullest, you will, at some point, come across many parts of yourself that you’ll find difficult – if not completely disturbing – to accept.

These ugly and frightening parts of ourselves are elements of the Shadow Self: the darker side of our nature.

In the domain of psychology, renowned psychologist Carl Jung devoted a lot of thought to this problem of the “Shadow Self”, as he was deeply invested in the research of ancient esoteric knowledge and spiritual scriptures to not only treat the mind of man but his Soul as well.

In response to his serious preoccupation, Jung created the Archetypes model, a concept wherein he believed our unconscious minds are fragmented or structured into different “selves.” These selves attempt to organize how we experience different emotions, situations, and challenges in life. Two of Jung’s major Archetypes are the Persona and the Shadow Self.

The Birth of the Shadow Self

It is a frightening thought that man also has a shadow side to him, consisting not just of little weaknesses and foibles, but of a positively demonic dynamism. The individual seldom knows anything of this; to him, as an individual, it is incredible that he should ever in any circumstances go beyond himself. But let these harmless creatures form a mass, and there emerges a raging monster.– Carl Jung, “On the Psychology of the Unconscious“

So what exactly are the “Persona” and “Shadow Self”? I’ll explore below:

What Is The Persona?

Well the Persona, according to Jung, defines who we would like to be and how we wish to be seen by the world. The word “persona” is derived from a Latin word that literally means “mask,” however in this instance, the word can be applied metaphorically, representing all of the different social masks that we wear among different groups of people and situations.

What Is Shadow Self?

On the other hand, the Shadow Self is an archetype that forms part of the unconscious mind and is composed of repressed ideas, instincts, impulses, weaknesses, desires, perversions, and embarrassing fears. This archetype is often described as the darker side of the psyche, representing wildness, chaos, and the unknown. Jung believed that this latent energy is present in all of us, in many instances forming a strong source of creative energy.

We are all born pure, like blank canvases. But at some point during our childhood development, we learn knowledge that teaches us to separate things into good and evil. The moment we eat from this tree of knowledge, our shadows are born and we begin to divide ourselves into multiple parts. Furthermore, in our cultural socialization process, we begin to sort out those traits within us that are acceptable to society (the Persona), and those that are unacceptable (which are later hidden away – the Shadow).

This is where the Persona and Shadow Self go hand-in-hand: the Persona is the lovable face we present to the world while the Shadow is the face we hide from the world.

Jung explained the “shadow self” meaning as:

“What we call civilized consciousness has steadily separated itself from the basic instincts. But these instincts have not disappeared. They have merely lost their contact with our consciousness and are thus forced to assert themselves in an indirect fashion. This may be by means of physical symptoms in the case of a neurosis, or by means of incidents of various kinds, or by unaccountable moods, unexpected forgetfulness, or mistakes in speech… a modern man protects himself against seeing his own split state by a system of compartments. Certain areas of outer life and of his own behavior are kept, as it were, in separate drawers and are never confronted with one another.“

Thus, the dark shadow traits that we all possess accumulate in the corners of our unconscious minds, never becoming adequately integrated into our conscious minds because we never see our split state in the first place (due to our psychological defense mechanisms). And so we continue accumulating these dark desires, motivations, and fears.