Religious Narcissistic Abuse: 15 Tactics Narcissists Use To Control You 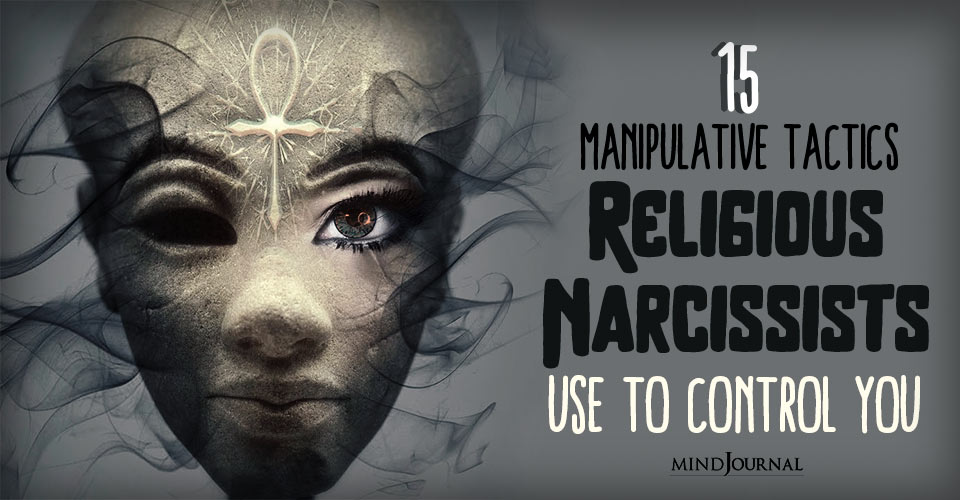 There was a time when your religious beliefs brought you companionship and peace, but now you struggle with intimacy, insecurity, and comparison. You used to find security in your faith, but now there is the only sanctuary in ceremonies and rituals. How did you get here? Narcissist uses their religious belief to abuse, manipulate, control, and dominate you through fear.

They systematically take the life out of your faith and replace themselves in the center.

It doesn’t matter the religion. Major organizations such as Christian, Muslim, Buddhist, Hindu, and Jewish or even minor sects such as Mormon, Taoism, Confucianism, New Age, or Rastafari can be used. Even those who do not profess a belief in God such as Atheistic, Agnostic, or Satanism can be included.

It is not the type of belief but rather how the faith is used that makes it abusive.

It begins with dichotomous thinking, dividing people into two parts. Those who agree with the narcissists’ beliefs and those who don’t. Interestingly, only the narcissist is the judge and jury of who belongs on which side. Your opinion is insignificant.

Then the narcissist makes fun of, belittles, and shows prejudice towards other beliefs. This tactic is done to remind you that if you change your views, you will be treated likewise.

Suddenly the narcissist becomes elitist and refuses to associate with people or groups they consider impure or unholy. They prefer isolation and insist you do the same while condemning others who don’t.

4. Force you to adopt their point of view

Next, the narcissist requires that you completely adopt their point of view. There is no room for differing opinions or questioning their authority. Any voicing of opinions to the contrary is met with threats of abandonment or divorce. There is no free will for you.

Demands of total submission without question follow. You are not free to question their authority and any attempt to do so is met with spiritual, physical, and/or verbal discipline. Name-calling, chastising, and silent treatment are common maneuvers into compliance.

6. Need the appearance of power in public

The narcissist is no longer satisfied with private dominion but instead needs the appearance of power in public. They expect strict adherence to whatever image they have created regardless of the accuracy of that image. Even the slightest hint of challenging their facade is met with quick and cruel reprimands.

To further intimidate, the narcissist labels people who don’t comply with their beliefs as disobedient, rebellious, lacking faith, demons, or enemies of the faith. This is done in front of others to reinforce their opinions and instill fear inside and outside the family.

There is a huge emphasis on public performance. They demand perfection and happiness at all times. Religious activities such as attending church have extreme demands, excessive expectations, and rigidity. No allowances are given even for grieving over the loss of a friend or relative.

Strict adherence to their rules and regulations is commanded with absolute statements about insignificant issues such as hair color or style. Non-compliance is met with severe discipline and even excommunication.

Randi Fine is a dedicated pioneer in the narcissistic abuse movement and a Narcissistic Personality Disorder abuse expert. She is a radio show host, author, and Coach/Counselor living in Ft. Lauderdale, Florida. Through her wealth of experience, insight, and wisdom, she offers hope, compassion, and healing to others. Randi is the author of the groundbreaking book, Close Encounters of the Worst Kind: The Narcissistic Abuse Survivors Guide to Healing and Recovery, and the compelling memoir, Cliffedge Road.View Author posts