The 7 Deadly Sins Of Narcissism 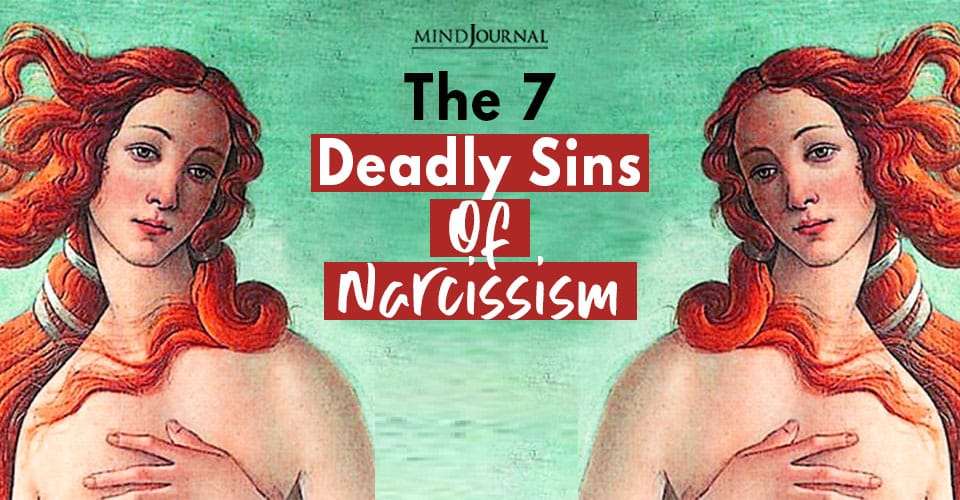 If you have ever come across a narcissist and have been subjected to their vile narcissism, then you would surely know about their deadly sins. Anyone who has been in a relationship with a person with a Narcissistic Personality Disorder would know how utterly selfish and ruthless they can get.

They want the other person to be completely under their control and do as they say. For them, they are the be-all and end-all of everything, and that the whole world revolves around them. What they think, what they say, and what they want are of utmost importance. The driving factors behind this kind of attitude is varied.

The seven deadly sins of narcissism were initially put forth by renowned psychotherapist, and clinical social worker, Sandy Hotchkiss. According to her, these seven characteristics perfectly described how a narcissist truly is.

Here Are The 7 Deadly Sins Of Narcissism

It is not like they are somehow not able to relate shame with their actions. It is not like shame is entirely absent from their life. Just that they are unable to process this shame is a manner that is healthy and organic.

Not expressed or vented in the proper manner, it just begets more problems and thus starts the endless loop of despicable acts and the inability to process them and thus more such acts in frustration.

Related: 3 Ways Narcissists and Sociopaths Manipulate To Gain Control Over You

Narcissists truly believe that they are above and beyond themselves. In psychological terms, this is known as magical thinking.

They have such a distorted version of themselves inside their head that they can’t even process their own shortcomings. Instead, they project these on other people.

If they ever get off their high horse, they start feeling restless and are at great unease. The only way for them to feel better about themselves is to degrade and debase someone else.

In a bid to prove that they are better than everyone else, they try to make others envious of themselves. This is just another way they are projecting their own insecurities onto others.

Because they are disillusioned into thinking they are somehow superior to everyone else, they also expect the world to treat them as such. As long as everyone is ready to be on their beck and call they are happy.

As soon as someone digresses, they immediately point them out as a ‘difficult’ or unreasonable person. They take non-compliance as an attack on their supposed superiority. This threatens their bubble of illusion. This kind of behavior might also trigger their narcissism driven rage.

This is the reason they are the worst kind of people to be in a relationship with. They think the world of themselves and expect you to do the same. Your worth and existence is solely limited to how useful you are to them.

Their abuse starts with just mental abuse but can progress to other forms as well. They do not care about the happiness or even the mental peace of the other person. The only thing that matters to them is that everything should be as it suits them.

Related: 19 Things A Narcissist Says and What They Really Mean

They feel they have a freehold on the other person and their life. No matter how many times someone might tell them to give them space, or stay away from them, narcissists will continue to violate every boundary.

They do not care what you want, all they care about is themselves, and what they want to do to make themselves feel good and satisfied.

As mentioned above, the existence of anyone close to them is important only up to the point where it can be used to serve them in one way or the other.