The Aging Narcissist: What To Expect From Narcissistic People When They Get Old 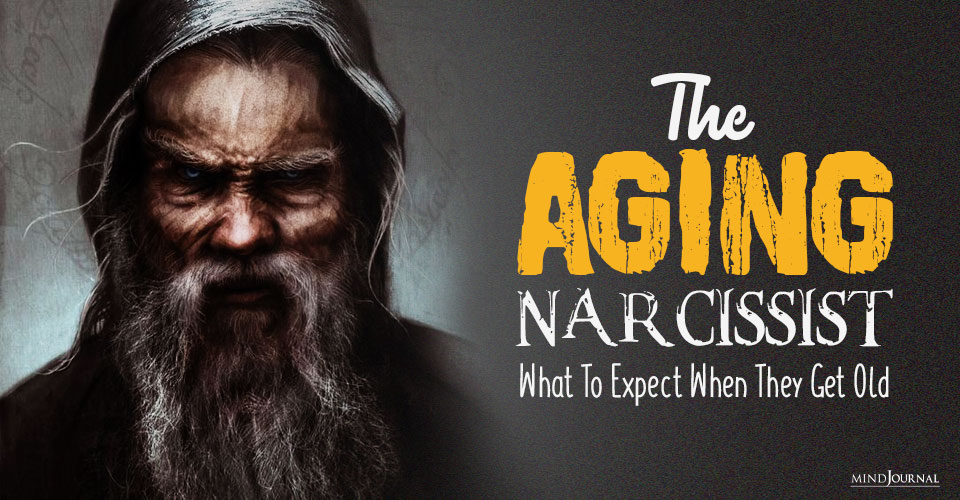 What happens to narcissists as they age? Does karma finally catch up to them? Or do they start realizing how they have abused others? Let’s take a look at the fate of an narcissist aging.

Aging is a natural part of life and all of us have to go through this as we progress through the developmental stages of life. With age comes new found maturity and wisdom that enables us to navigate life experiences better. But what happens to the narcissist? Can they lie, manipulate, and cheat their way out of old age?

No, they can’t. Despite how manipulative they might have been in their youth, narcissists also get old like the rest of us. And it can be really challenging for the aging narcissist to adjust with old age.

Why? Because a narcissist gets worse with age.

Narcissists want to be the center of attention. They desperately crave praise, approval, validation, and admiration from others. However, with the passing of years, the flow of praises seem to vanish.

As our society is obsessed with beauty and youth, life can get seriously bad for the elderly narcissist. They start to question their own worth, feel vulnerable, and tend to give in to their insecurities.

So what happens to narcissists in old age?

Narcissist old age is riddled with challenges. Their tendency to see themselves as better than others leads to a lot of issues with self-image in their older age.

What they believed in the prime of their youth is proven wrong with time as reality hits them. As they struggle with old age, their social standing becomes weaker and things start going downhill for them.

So what eventually happens to an aging narcissist? Fortunately, for most narcissists, their toxic traits tend to wane with age. Although, this might not be true for all narcissists.

According to a recent 2019 study released by the Journal of Personality and Social Psychology, specific personal relationships and career choices can lead to less narcissism in certain individuals by middle age.

The study, which spanned over a 23-year period, from young adulthood to midlife, found that “narcissists become less narcissistic with time,” writes author Kyle Schnitzer.

The researchers primarily focused on 3 crucial aspects of narcissism in an aging narcissist:

The study analyzed around 500 narcissist old age participants from the time they started college at the University of California Berkeley till the narcissists were 41 years of age. The researchers used survey questions to assess the narcissistic traits of the participants.

An aging narcissist with higher levels of vanity during their youth ended up in toxic unstable relationships. They were highly likely to get divorced and have fewer children by the time they reached middle age. However, they experienced good health in general.

Narcissists with high levels of entitlement at age 18 were less satisfied with life and experienced a lot of negative events by middle age. The researchers found that merely 3% of participants had higher levels of narcissism during that time.

The study concludes “The findings suggest that people tend to become less narcissistic from young adulthood to middle age, and the magnitude of this decline is related to the particular career and family pathways a person pursues during this stage of life.”

Another 2018 study revealed that “narcissism levels may decline over the lifespan of an individual.” Lead researchers Gregory L. Carter and Melanie D. Douglass found that an aging narcissist tends to show remarkably lower levels of narcissism.

However, they experienced high levels of loneliness when compared to participants in middle age. They observed that the level of narcissism determined the association between loneliness and age.