What Is Dementia: Symptoms, Causes, Types and Treatment 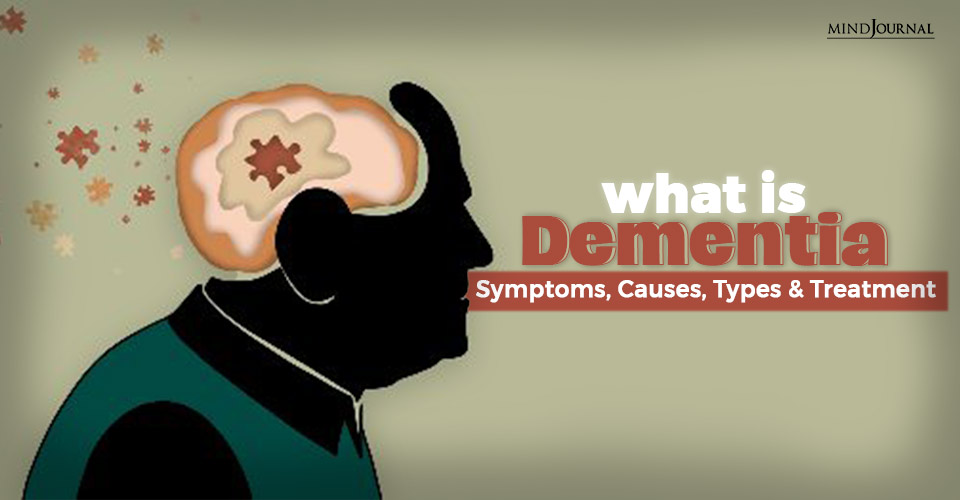 Forgetfulness, transient confusion, or having trouble remembering a call or word can be a normal part of life. But when cognitive issues or unusual behaviors begin to impair your daily activities, such as working, preparing meals, or managing finances; then consulting a doctor may be necessary as these can be signs of dementia.

Dementia is a medical syndrome characterized by cognitive impairment, which represents a decline from the preceding degree of cognitive functioning, and is related to impairment in functional competencies and, in lots of cases, behavioral and psychiatric disturbances. Several formal definitions exist, along with that of the ICD-10:

‘A syndrome due to disease of the brain, usually of a chronic or progressive nature, in which there is a disturbance of multiple higher cortical functions, including memory, thinking, orientation, comprehension, calculation, learning capability, language, and judgment. Consciousness is not impaired. Impairments of cognitive function are commonly accompanied, occasionally preceded, by deterioration in emotional control, social behavior, or motivation. The syndrome occurs in Alzheimer’s disease, in cerebrovascular disease, and in other conditions primarily or secondarily affecting the brain’.

Dementia is one of the major reasons for disability and dependency among older people worldwide. While it may be overwhelming, it can adversely affect the lives of the sufferers and their caregivers and families. Unfortunately, there is a lack of knowledge and information about dementia, resulting in stigmatization and limitations to prognosis and care. The effect of dementia on carers, the circle of relatives, and society at large may be physical, psychological, social, and economic.

Dementia can have variable cognitive decline from moderate to outstanding. More challenging is its distinction from extra subtle patterns of cognitive impairment which fall short of the standard definitions of dementia but which may additionally constitute a ‘pre-clinical‘ dementia state.

Dementia is prompted by damage to brain cells. This damage interferes with the potential of cells in the brain to communicate with each other. When brain cells can not communicate normally, thinking, behavior, and feelings can be affected.

Depending on the vicinity of the brain that’s affected by the effect, dementia can affect humans in different ways and cause distinct symptoms. Some varieties of stressful brain injury – mainly if repetitive, such as those received by athletes – had been related to dementia appearing later in life.

Dementia can also be brought about by:

Read: 22 Tips to Keep Your brain Sharp and Young At Any Age.

There are many different varieties of dementia. Dementia may be divided into two categories primarily based on which part of the brain is affected. These include –

Cortical dementias happen due to issues in the cerebral cortex, the outer layer of the brain. They play a critical position in reminiscence and language. People with these kinds of dementia usually have severe memory loss and can not remember phrases or recognize the language. Alzheimer’s and Creutzfeldt-Jakob ailment are two forms of cortical dementia.

The boundaries among different varieties of dementia are indistinct and mixed forms often co-exist.

Doctors can determine that someone has dementia with a high degree of certainty. But it’s harder to determine the exact type of dementia because the symptoms and brain modifications of different dementias can overlap.

Typical questions about someone’s clinical and family records might include asking about whether dementia runs inside the family, how and when signs and symptoms began, changes in behavior and personality, and if the individual is taking certain medications that could motivate or worsen signs and symptoms.

Measuring blood pressure and other critical signs and symptoms may assist physicians to detect situations that might cause or arise with dementia. Some situations may be treatable.

Assessing balance, sensory response, reflexes, and different cognitive functions help in identifying situations that may have an effect on the prognosis or are treatable with drugs.

Brain cellular death can’t be reversed, so there’s no known treatment for degenerative dementia. Most styles of dementia can’t be cured, however, there are approaches to control your signs and symptoms. If dementia signs and symptoms are due to a reversible, non-degenerative cause, however, some remedies can be viable to save you or halt in addition to brain tissue damage.

The following medicines are used to temporarily improve dementia symptoms:

These medications work through boosting levels of a chemical messenger concerned with memory and judgment. Primarily used to deal with Alzheimer’s disease.

It works by regulating the activity of glutamate, another chemical messenger concerned with mental functions, including learning and memory.

Some recommended forms of therapies for dementia include:

This therapy focuses on how to make your house safer and teach coping behaviors. The purpose is to save you from accidents, together with falls; manage conduct; and put together you for the dementia progression.

It would possibly encompass such things as speaking with your loved one about their hometown, work-life, or favored hobbies. The individual sessions may address issues from the past, or such things as photos or treasured items, to help.

This therapy is going over some simple things such as the character’s name, and date and time. They would possibly have signed with those records placed around their home.

Dementia is hard to prevent. Studies show that people can reduce their risk of developing dementia by changing their lifestyles such as, getting regular exercise, not smoking, avoiding excessive alcohol consumption, controlling their weight, following a healthy eating regimen, and maintaining healthy blood pressure, cholesterol, and blood sugar levels, etc.

Although getting older is the biggest risk for dementia, evidence indicates there are things you can do to help lessen your own threat.

Staying physically active and engaging in different activities like walking, dancing, and gardening can prove highly beneficial for sufferers. Being physically active is one of the most effective methods to lessen your risk of dementia. It can also improve your coronary heart, blood circulation, weight, and intellectual wellbeing.

If your behavior is frequently worse at night, try to set up going-to-bed rituals that are calming. Make sure to avoid television, work, social media, talking excessively with family members, boozing or drinking coffee or any other activity that may adversely affect your relaxed body and mind right before bedtime. You should also practice good sleep hygiene.

A wholesome, balanced weight-reduction plan may reduce your risk of dementia, in addition to other situations along with cancer, type 2 diabetes, obesity, stroke, and heart disease. Good habits can also actually have the power to slow dementia.

You may have heard of the MIND eating regimen. It combines the traditional Mediterranean weight loss plan and the DASH diet (which seeks to lower high blood pressure). It’s being studied as a way to cut the danger of having dementia.

Keeping your mind energetic may help to reduce your possibility of getting dementia. Regularly challenging yourself mentally seems to build up the brain’s potential to cope with the disease. One manner to consider is ‘Use it or lose it’.

Although there is no way to prevent dementia, but maintaining optimum health can reduce the chances to a great extent.