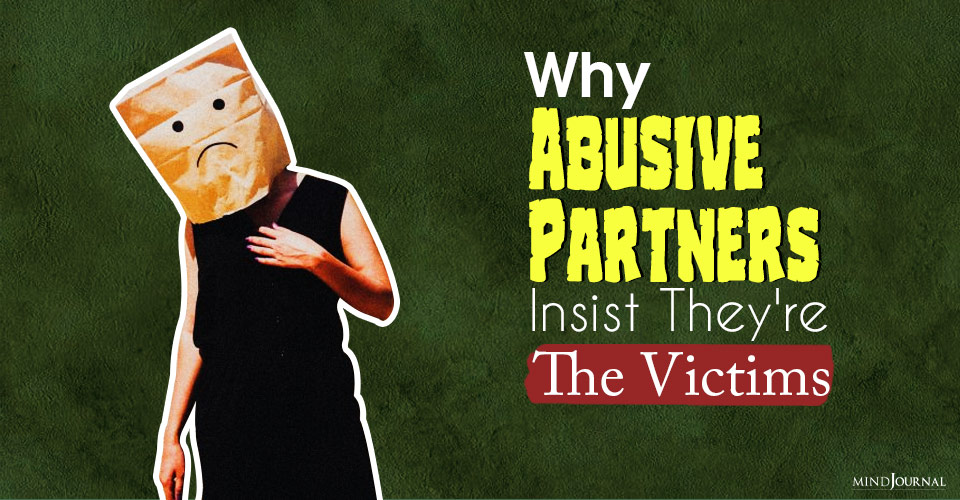 Narcissistic abusive partners are the masters at twisting reality and weaving stories to make others believe that they are the victims and their partner was the actual abuser. Here is how narcissists rationalize calling their victims abusive. By Dr. Elinor Greenberg

Note: I am using the terms narcissist, narcissistic, or NPD as shorthand to describe someone who qualifies for a diagnosis of narcissistic personality disorder.

Have you ever wondered why so many narcissists devalue and humiliate their mates and then claim to be the real victim in the relationship? Some of them even accuse their non-narcissistic mate of being the real narcissist. Many of my clients report that during a fight their narcissist mate will lie and mischaracterize what is going on in an attempt to seize the high ground.

These abusive mates conveniently forget the many nasty things that they said and did during the argument and instead fixate on the one harsh thing that their abused mate said in their own defense. Following are a few examples of what I mean.

Here Are The Examples Of Narcissistic Abusive Partners

Carlos is a very controlling and critical man with NPD.  His wife Brenda, who was perfectly fine when she married Carlos, is now taking anti-anxiety medication and is thinking about starting anti-depressants as well.  They have been married for five years and their marriage and Brenda’s mental health are going downhill fast.  Here is how Brenda described the situation to me:

I dread getting up in the morning.  I know Carlos is going to have a list of things that I did wrong or might do wrong in the future.  Carlos orders me around as if I worked for him.  He gives me a list of chores that he wants to be done over breakfast. When I come home after work, there is another list waiting for me and more complaints.

He is always telling me what I did wrong. I get nervous now whenever I know I will see or hear from him. I used to look forward to his texts and calls, now I dread them because I know that he will either have something nasty to say or more chores for me to do.

The crazy thing is that when I reach the end of my rope and complain about his complaining, Carlos paints himself as my victim.  He can say twelve nasty things to me and if I say one single thing in my defense or finally lose my cool and just tell him to please “f*ck off and leave me alone,” he accuses me of being abusive.

He will tell everyone he knows how he had to put up with my telling him to f*ck off and I sound like a crazy shrew. He conveniently leaves out everything he has been doing for months to provoke me!

Related: Flying Monkeys: How Narcissists Use Them To Torment Their Victims

Will has never learned how to give in gracefully.  He is an extremely self-centered narcissist and, in his mind, everything is always someone else’s fault. So, when his girlfriend Amy made plans for them to go out with another couple, he reluctantly agreed to go.  However, he was actually furious that Amy dared to plan anything without his permission.

On the way to the dinner, he acted very annoyed and walked so fast that he actually left Amy behind. This was business as usual with Will.

Whenever he was angry at Amy, he made a habit of walking too fast for Amy to keep up with him. Leaving her behind was one of the ways he punished Amy for displeasing him. When Amy complained and asked Will to slow down and walk with her, he said:

You are always picking on me.  According to you, I can’t do anything right.  I am going to this dinner because you wanted me to.  Why isn’t that enough for you?  Do you really have to criticize how I walk? I can’t believe how much crap I have to put up with from you!

In Will’s mind, Amy was 100% wrong, and he was the innocent victim being forced to go out with a couple that he did not know and then being criticized for how he walked to dinner.