11 Ways Narcissists Use Shame to Control Others 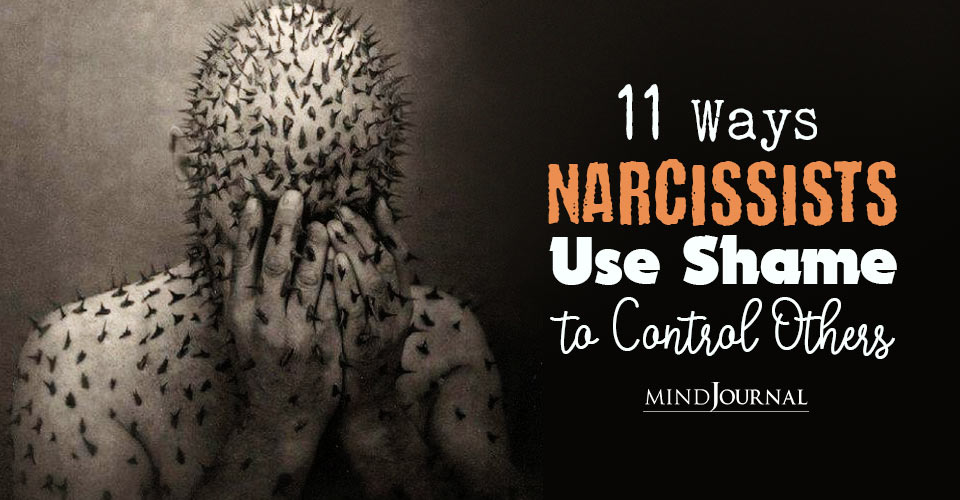 A weakness of a narcissist is their extreme hatred of being embarrassed. There is nothing worse for them than having someone point out even the slightest fault. Ironically, they have no problem openly doing this to others; narcissists use shame to manipulate and control others, without even a slight bit of hesitation.

In order to avoid the first punch, a person needs to understand what it looks like, and how narcissists use shame to control you.

Related: The 6 Types Of Narcissists And How To Spot And Cope Each One Of Them

11 Ways Narcissists Use Shame to Control Others

A narcissist will retell another person’s story adding their own flare of additional shame. This can be done in front of others or privately.

Narcissists love to gather information about a person and store it away for later abuse. They use their charm to entice a person to share confidential details, especially ones that caused the other person embarrassment.

Once gathered the narcissist uses the story to keep the other person in check and constantly worried about when the information will come out.

Related: The Untold Story Behind A Narcissist’s Projection

No one is perfect except for the narcissist. The narcissist is very good at identifying the faults of others and even better at passively aggressively commenting on them.

This is a way of putting the other person ‘in their place.’ When confronted, they often say, “I was only joking,” or that person “can’t take a joke.”

Narcissists are talented at exasperating others and then using their reaction as justification for becoming the real victim. Regardless of how hard the narcissist incited the other person, the angry reaction to the provocation is viewed as shameful.

The other person who usually feels bad by their reaction, allows the narcissist to play the victim card, and thereby surrenders control to the narcissist.

The implication is that the narcissist is more mature and has developed beyond the level of the other person.

It doesn’t matter what the religion of the narcissist or the other person is. In every religion, there are a set of standards and expectations. The narcissist will use the other person’s religious beliefs to guilt them into acting a certain way. They might even go as far to say, “God told me you need to…”

This is a checkmate position because the other person has nowhere to go. Offensive play is one of the most horrible ways narcissists use shame to control others.

They will use sophisticated vocabulary, physical posturing such as looking down at the other person, and embellishment of details to disguise the real point of shaming the other person.

Related: 10 Interesting Facts That Will Help You Understand Narcissists Better

This produces an ‘I can never be good enough,’ feeling in the other person.

A narcissist is very aware of how they look and appear to others. Frequently they are dressed in designer clothing with immaculate grooming. Not a hair is ever out of place.

This is not just for the narcissist; rather their perfectionistic appearance is used to demean others. Comments like, “They don’t take care of themselves,” or “It doesn’t take a lot of effort to look better” are typical.

When a person can see a punch coming, it is easier to dodge. Resist the temptation to attack first with a narcissist that will only intensify their reaction. Instead, deflect and distract to avoid becoming a target.

Want to know more about how narcissists use shame to control you? Check this video out below!

6 thoughts on “11 Ways Narcissists Use Shame to Control Others”