The 6 Types of Narcissists: How To Spot And Cope With Each Of Them 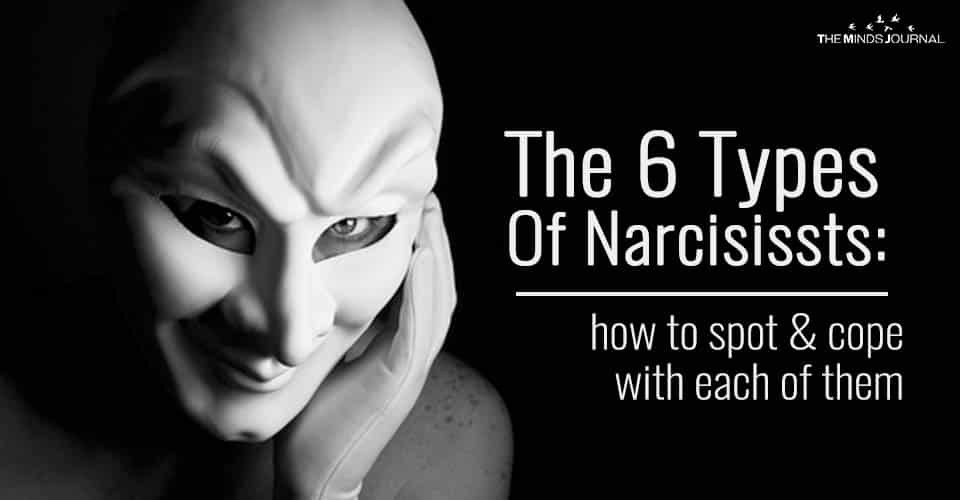 Types of Narcissists who can turn your world upside down.

We think of a narcissistic person to be a self-obsessed person. That’s not it. There’s more layer to such personality. That’s eventually proved to be harmful to people related to them.

At times, some people we date or even land up in a relationship turn out to be narcissistic. If you ever wonder how such people stand up in the world today, you should understand the inner workings of them.

Typically speaking, most narcissists are toxic people that come into our worlds and turn it upside down. They bask in self-glory and often create havoc in our lives.

Here’s how to stop feeling sorry for toxic people.

We need to have the best coping mechanisms and identify these types of Narcissists.

Here are some of the worst types of narcissists we have identified in research:

6 Types of Narcissists and the havoc they create

Most of these people are liars and rationalists. They are master deceivers and often cheat on their partners. They often rationalize saying that they have a lot of love to give and have a lot of solace and affection with goodwill for the other partner. However, this is just the smokescreen that gives out a wrong impression. The truth lies in the fact that a cheater often lacks empathy and is self cantered.

These types of narcissists have a lot of admirers who are independent friends and fawning acquaintances.  These people often have their egos stroked and soothed. Their self-doubt is monumental and part of the relationships they are in. They often have multiple partners and swear allegiance to one when the time comes. These people often cite inadequacies and mistakes as an excuse for their cheating behavior.

The best way to get past cheaters is to stay alert. You should be vigilant and always try to find out how to get past the vicious web of lies. Turn a new corner and stay abreast of the whereabouts of a cheater.

If you want to know if you’re dating a narcissist, then watch out the video to know the signs

If words could inflict damage, then trust the smooth talker to capture your heart and mind! These types of narcissists often are akin to selling their priceless dreams and somehow have the best things to stay. This trait becomes an insidious feature of narcissists. They often control their partners and often turn their backs on you, when the time comes.

Smooth talkers can spot it head-on when the partner is thinking about something even before a conversation starts. These people start to manipulate the environment and blame you every time you feel neglected or suspicious and even worried. The relationship seems perfect for the outsider but the problem seems to lie in you!

Coping with smooth talkers is the toughest thing to do for most partners. They seem to have a halo of invincibility around them. The main intent is to beat them at their own game. You should break into the smooth-talking and stay aware. You need to handle relationships with some amount of agility and nuance.

Are you confused about your relationship stage? Read Relationship Stages With A Narcissist Or Borderline And Triangulation

These grandiose narcissists often project a bag of lies as the truth. They are found in social dos and parties and always are in their best behavior.

How do you cope with them?

When the grandiose narcissist speaks of superiority, he should be ignored and you should stand up and compete against the claims. Do not take everything at face value and be tactful.

Do you feel you’re invisible when in a relationship? Read Invalidation and Narcissism: Why They Slowly Erase You

These narcissists often will attract the person with his ways and behavior. He will draw you in and will ignore you in the first instance to show his superiority.

Coping mechanisms for such narcissists range from ignoring the person to staying put on your position when the narcissist makes an onslaught.

This kind of a narcissist is someone that has built himself up on humiliating others. There are a lot of traits that this kind of man exhibits. His character traits are often close to that of a grandiose narcissist. The bully in him often makes him a winner socially. He has the ability to make you wallow in self-pity and doubt.

These types of narcissists are regularly found in social cliques and neighborhood ghettos. They may prey upon the most unsuspecting stranger and cast a spell of self-doubt.

It may be a cowardly thing to do in the first place, but the best to do is to avoid playing to the gallery. Such narcissists often will demean you. The fact remains they should be steadfastly avoided.

These people are typically are very self-centered and conceited and have gigantic egos. These selfish narcissists often have a certain amount of rigidity in their own beliefs while dealing with their own opinions. They refuse to listen to others and are stuck in a relentless rigmarole of excessive self-involvement.

These kinds of narcissists are found ample in social circles. They keep the company only to soothe their egos. These men make a living by participating in social cliques and circles.

Typically speaking, selfish narcissists need a deaf ear! Turn on to other things when he or she gets started. Most selfish narcissists are just about concerned about their own selves and their career enhancements and life. The idea is to move away from them.

Here’s more to know about  Narcissists, NPD and their Partners