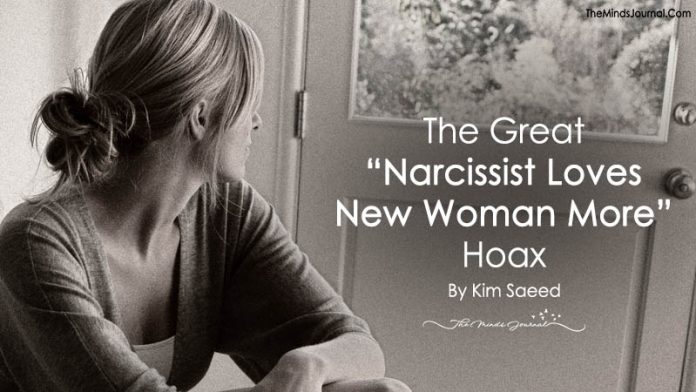 Does a narcissist loves the new woman more?

Narcissists resign from old relationship and set out for a new prey to feed their inflated sense of ego.

Of the many fears that victims of narcissistic abuse face, the heart-wrenching concern that their disordered Ex will be better for the new woman is one of the worst.

In spite of knowing that the Narcissist is a pathological liar, colossal cheater, and soul-assassin, discarded victims are often 100% sure that their abuser has miraculously begun toeing the line for the new girl.

It’s a miracle, by George!  The Narcissist has changed!

His former victim sees it on Facebook and Instagram, hears about it from the Narcissist himself, and is informed by their shared circle of friends that the Narcissist has never been happier.

His friends and family can barely believe their own eyes, and even the neighbors walk around with their mouths agape, wondering what it is about the Narc’s new girlfriend that’s incited such a divine intervention of the Narcissist’s wily ways.

Jeepers, if he’s changed so drastically for the new woman, then…

…then it must mean there was something wrong with you, right?

And maybe because of this, the Narcissist was forced to find love elsewhere.

And because her love is so celestial and the depth of her love so staggering, the Narcissist really has changed and he loves the new woman more than he ever could have loved you.

Let’s pause for a moment of reflection.

No one can say that it can’t happen.  However the probability of it happening is zero.

In other words, I cannot guarantee that this event would never occur, but I would bet large sums of money that it wouldn’t.

The chances that the Narcissist will change for the new woman – simultaneously falling head-over-heels in such love that it’s been blessed by Eros and Aphrodite themselves  – are about the same as my constructing a drone for the Department of Defense, all without an instructional pamphlet.

The Narcissist is a skilled and convincing actor.  After all, he fooled you into believing you were the love of his life, perhaps even his past lives.

How long was he able to keep up the charade?  Months?  Possibly years?

Then, after his mask started slipping, he likely expected you to keep up appearances in front of everyone.

Still yet, when you discovered his lies, online dating profiles, and infidelities, he convinced you that he had reasonable justifications for it all.

That somehow, in spite of his love crimes, he still wanted you and was in love with you.

And so it will be with the new girl.

You see, he not only has to convince you that he’s found his soul-mate and best friend in the new girl, he has to get everyone else on board, too.

It’s essential that you doubt your memories; distrust that what he did to you was so bad after all.  He must make you and everyone within a 100-mile radius believe that you exaggerated everything and – further – are delusional and unstable.

In other words, that he did no wrong and he’s just an innocent man trying to find real love.

What better way to do that than to trap a new girl into his web of deception and get her to drink the Kool-Aid?

Thus starts a fresh round of love-bombing, complete with vacations, church with the kids, and an engagement ring.

This crusade is one they can wage for perverse periods of time.  It’s important that you don’t internalize this as meaning she is his cosmic soulmate.

The Narcissist doesn’t want to be suspected of wrong-doings, nor accept one molecule of accountability for his actions, thus the Great “I’ve Changed for the New Woman” Hoax.

Don’t drink the Kool-aid.  Trust that he’s a weasel and that the new girl will find out in due time.  They always do.

…..and obsesses over dysfunction….

Codependents’ reactive role amplifies their focus on their partner, while they hide who they are. They increasingly try to control the uncontrollable, sacrifice themselves, and try harder to please and be accepted.
Read more
wpDiscuz
6
0
Would love your thoughts, please comment.x
()
x
| Reply