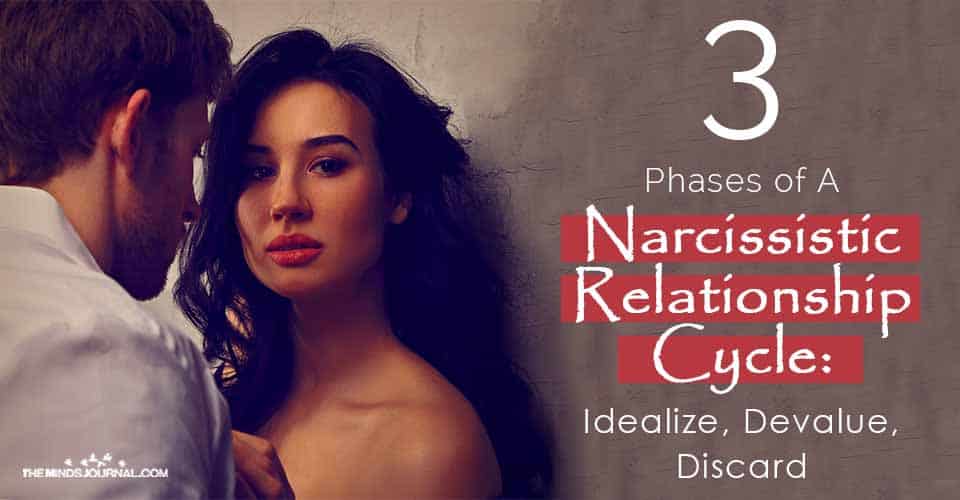 A relationship with a Narcissist has been compared to being on a roller coaster, with immense highs and immense lows. They have been described as the proverbial Jekyll and Hyde, one way one minute, another the next.

Narcissists need people more than anyone. Because their entire sense of self-esteem and self-worth is dependent on the admiration of others, their emotions are a precarious balance of needing others and needing to be left alone.

Narcissists feel an enormous void inside of them. This void is ever-present and the only thing that fills it is the love and esteem of another. The fix is always temporary though.

A Narcissist describes it this way, “It’s like my brain is constantly seeking something. It’s like I’m always chasing a carrot at the end of a stick. Nothing I do satisfies me, at least not for long. I feel like I only do things because I’m supposed to because society does it. I don’t feel like I belong anywhere or with anyone.”

Narcissists are completely self-absorbed and are oblivious to the wants and needs of others. They enter into relationships in an attempt to fill this void and to make sure that they have someone who is always available for sex, an ego stroke or whatever need they may have.

A Narcissist is very careful when choosing a target. Typically, they will choose a victim based on their status. They must be attractive, popular, rich, or extremely gifted in some areas. The greater the status, the higher the value the Narcissist places on the Supply derived.

Once a target has been chosen, it’s almost like the Narcissist gets tunnel vision. They are hyper-vigilant in their pursuit and will project the perfect image that their victim wants them to be. They are excessively caring, loving, and attentive at this stage. They shower their targets with attention, compliments, and literally sweep them off their feet.

They place their target on a pedestal, idolize and worship them. Their target is the greatest thing since sliced bread. Here the Narcissist is ecstatic, full of hopes and dreams. They will talk and think about them constantly, they are euphoric. This is as close as a Narcissist will ever get to feeling the love. This kind of idolization is what others would call infatuation.

The victim is likely so caught up in all the attention and is usually thinking at this point, that they have found their soul-mate. Their pursuer is exactly what they want in a partner (because the Narcissist is mirroring what they have learned appeals to their target) and they can’t believe how lucky they are and that this catch is still single.

What they don’t know, or could ever be prepared for, is what comes next.

Want to know more about the narcissistic relationship cycle? Read The Narcissist’s Cycle Of Abuse

The Over-Evaluation phase, if you’re dealing with a Somatic Narcissist, usually lasts anywhere from a few weeks to a couple of months, just long enough for the Narcissist to be confident that they have secured their target’s love and devotion.

Unbeknownst to the target, what they were witnessing in the early phase was the Narcissist’s false self. In this second phase, the mask comes off and the Narcissist starts to reveal they’re true colors.

The shift could be gradual or almost seemingly overnight. Suddenly the attention they so lavishly gave you is gone and replace by indifference and silence. Days or weeks could go by and you won’t hear from them. They don’t return your phone calls, they don’t keep a single promise and you’re starting to suspect that they might be involved with someone else. The target is left baffled and confused and wondering what they did wrong to cause such an abrupt turnaround.

Narcissists become bored easily and what usually starts happening in their heads at this stage, is that the void begins to emerge again. The high they were feeding off of is waning and they begin to question your worthiness, that perhaps you weren’t so special after all, because if you were then the void wouldn’t still be there.

They become moody and agitated easily, blaming you for even the slightest transgression. They start to disappear more frequently and they give you the silent treatment in an attempt to create distance. As the Narcissist withdraws, the target starts to cling, and your demands for his attention and your need to understand what’s happening, grate on his nerves. The harder you cling the more the Narcissist pulls away. They start to blame and criticize the target for everything, treating them as an emotional punching bag.

At this point, the target is an emotional wreck. The Narcissist has left without any explanation and they can’t figure out how one minute they were put on a pedestal and now it’s like they don’t even exist.

The Narcissist is a projector and they are projecting their emotional turmoil onto you. They feed off of other people’s misery (as long as it’s caused by them) just as much as they feed off of your admiration, either way, it makes no difference to them.

It is this person, this cruel, indifferent, unfeeling, sadist that is behind the mask. Most targets desperately try to find the one they fell in love with. What they don’t realize is that that person never existed. They were a facade an act put on by the Narcissist to secure their Supply.

The Narcissist will take no responsibility for their actions because they simply don’t care how they’ve treated you or how you are feeling.

Narcissists are not capable of forming normal healthy attachments to people. Those that aren’t familiar with the disorder are completely at a loss to understand how unnecessarily cruel their behavior can be. The target was never more than an object to the Narcissist, whose usefulness is on the decline.

The Narcissist isn’t one to throw away a potential piece of supply though. They will keep up this I love you, I love you not charade going for as long as it suits them or as long as you allow it. They will breeze in and out of your life as if nothing ever happened, completely oblivious and indifferent to your suffering.

This mind fuck is deliberate and they will keep feeding you crumbs of attention, just enough to keep you emotionally invested and available to cater to their every need.

At some point one of two things will happen: either they will find a new target and begin phase one with them, thus ignoring you completely, or you will have had enough of his psychotic abuse and you will take control and put an end to it, thus ushering In phase three.

It is almost baffling to watch the ease at which a Narcissist can pull away from his partners. Many targets are left asking themselves, “Did he ever love me? Did I mean anything to him?” The simple answer is no. No one means anything to him. Women are only a means to an end – to obtain the much needed Narcissistic Supply. Once your usefulness has run its course, you will be discarded abruptly and cruelly, without warning.

Trying to get over a relationship with a Narcissist is extremely difficult. Once it is over the target is usually an emotional wreck, whose self-esteem has been annihilated by the persistent demeaning behavior, insults, and cruelty of the Narcissist. Depending on when they were able to break free, the target may be a shadow of their former self, with a lot of work ahead of them to rebuild their shattered self-image.

Looking to know more about a narcissistic relationship cycle? Read How A Narcissist Plays You And How Their Cycle Of Abuse Works

As a victim tries to pick up the pieces, What must be remembered is that you were deliberately targeted, lied to, and manipulated by a skilled con-artist, for their own gain. There was nothing you could have done differently and none of this was your fault. The Narcissist will repeat this pattern with every person, every time, bar none.

All former targets must be vigilantly on guard, because a Narcissist always reserves the right to revisit a former source of supply, no matter how much time has passed or how badly they’ve behaved.

Once you have broken free you must close the door on any and all contact, because if you don’t you’re headed back to a watered-down version of Phase One – over and over and over again.

If you have ever been in a relationship with a narcissistic person, then you might be able to relate to this. Going through a narcissistic relationship cycle can be traumatizing, and the sooner you try to get out of that, the better. If you have been through this, then remember these lessons, as it can help you recognize the signs in the future, so that you don’t go through the same thing again.

If you want to know more about the narcissistic relationship cycle, then check this video out below: