The Narcissist’s Cycle Of Abuse 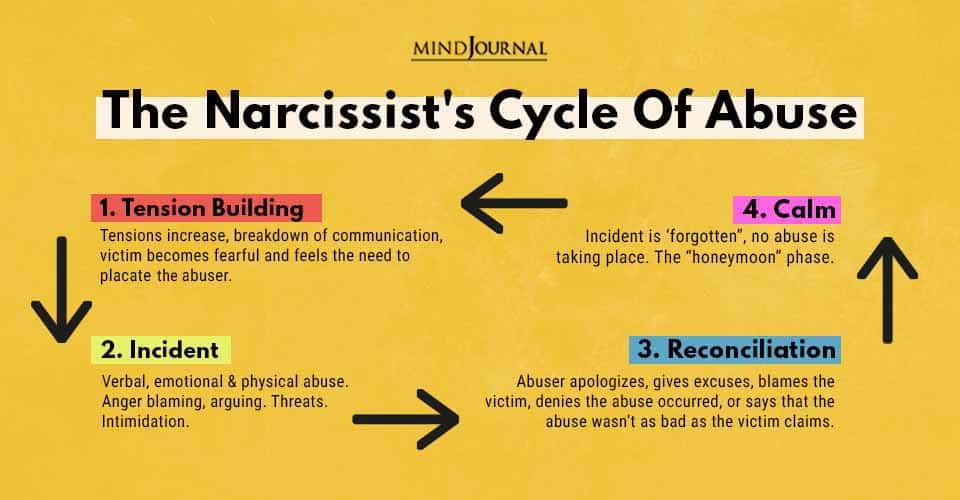 If you have ever been through a narcissist’s rage, and their cycle of abuse, you would know how emotionally debilitating it can be.

Rage or anger is one of the most common human emotions and is felt by each and every person at some time or the other. Even though getting angry sometimes is perfectly fine, because when your emotions pile up too high, you need to let it all out. Things get serious when you let your anger take over you entirely, and the cycle of abuse starts.

Rage works by short-circuiting the experience of shame that is, the feeling of being inferior or not enough, or not good enough. There is a thin line between anger; rage is when your anger reaches the next level and makes you do or say things that are extremely hurtful and humiliating for the other person.

But then, the whole point of raging is to put the other person down and make sure that they know where they went wrong.

What Is A Rage Cycle?

Occasionally, being upset with the people you love is a very normal thing and you don’t need to beat yourself up over it. The problem arises when you start raging.

Always keep in mind that it is okay to be angry, but not okay to rage. Rage has the potential to destroy relationships, and unless it is a rare thing, it can rapidly develop into a pattern or rage cycle as we know it.

The most prominent characteristic of a rage cycle is an outburst, which is further characterized by physical violence, verbal violence, abrupt/ dramatic exits, and addictive behavior. Such outbursts can happen numerous times daily, and also every few months. Sometimes, a rage cycle is followed by a period where the aggressor behaves in a very remorseful and kindly manner. This period is known as the honeymoon period. However, their primal desire for full control still resides in their mind.

One of the defining features of an aggressor and their cycle of abuse is when they refuse to discuss the outburst later on in a transparent manner. Ruminating or apologizing for their behavior is also a strict no-no.

People who are in a relationship with a raging person, suffer its after-effects for a long time. They become accustomed to the habit of not expressing everything honestly, due to the fear that they will fly into a rage. On the other hand, the aggressor physically and emotionally feels better after the outburst, and sometimes even fakes amnesia about what happened.

What Are The Characteristic Traits Of A Narcissistic Raging Person?

How Is Narcissism And Rage Cycle Related?

What is really at the core of a narcissist is uncertainty in their ability to feel smarter, larger, bigger, and more successful than everyone else. This makes them feel a lot better about themselves because the truth is, narcissists, suffer from extremely low self-esteem. They know what the truth is, but they choose to keep it hidden and build a facade of high confidence and arrogance.

Related: How To Handle Narcissistic Abuse

A narcissist flies into a rage when they see that someone is openly defying them and not catering to their every whim and fancy. This is because they get accustomed to the behavior of people prioritizing them all the time, so when the dynamics change, it shakes them to their core. Furthermore, they use their cycle of abuse to keep their victims in check.

Narcissists are so self-centered that they constantly need to get their ego fed. They only want people to compliment them, adore them, shower attention on them, and make sure that the world revolves around them.