How Life Changes After Being Broken By An Emotional Psychopath- 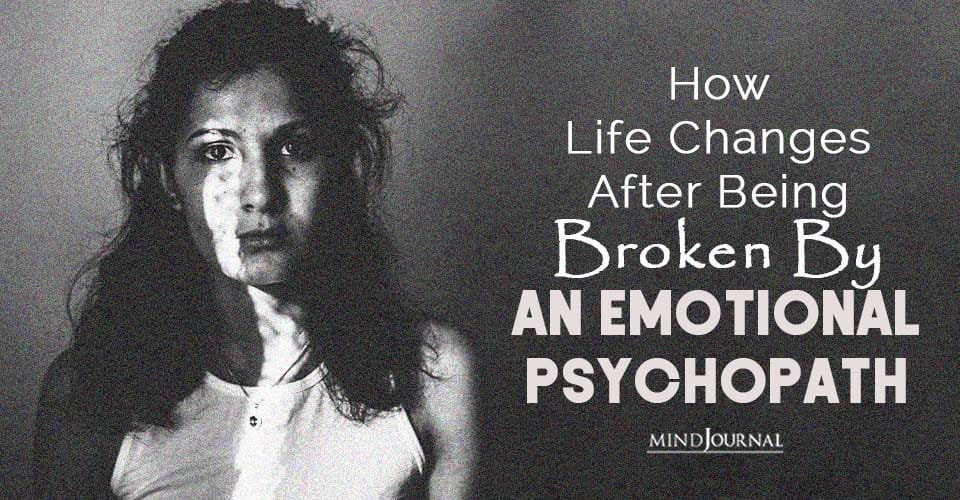 She was an ordinary girl, with ordinary dreams and hopes. She had faith in love and deep down in her heart, she knew her story would have an ideal ending. Not that she wasn’t familiar with stories of toxic relationships, where a person was left broken by an emotional psychopath, but she never thought those horrifying tales would become her reality.

“Nothing hurts more than being disappointed by the one person who you thought would never hurt you.” ― Gugu Mofokeng

All along, she dreamt of a normal lifestyle where she is just happy– a dream we all share right? Her desires were simple– a place of her own, nothing fancy, just a cozy place she can call her own. And a loving man by her side, who would admire and respect her for who she is and eventually, she would start a family with him. She wanted to teach her kids all the lessons she had learned in her life.

Is that too much to ask for? She just wanted some happiness and peace, and truth be said, a girl like her deserved nothing less, if not more. Sadly, life set a different course for her.

All her dreams crashed and were replaced by nightmares. What was worse, she couldn’t escape this loop of terrifying nightmares that sucked the life out of her. Vibrant shades turned into gloomy, dark colors. Happiness became a distant memory– she was engulfed in misery and pain.

She trusted her heart, believed that it would never misguide her. Unfortunately, this time, even her heart was deceived. Although her gut had warned her, she chose to ignore her instincts. What a mistake! But he was so taken with her in the beginning; she couldn’t help falling for him despite the warning signs from her body. It was as if he had cast a magic spell on her. She responded to nothing and no one but him.

If only she had known that she was actually falling for an emotional psychopath who would leave her broken and change her notion of love forever.

How could this girl have foreseen the stealthy tricks he would use to control her mind and make her believe she was something she never thought she could be. How could she have ever imagined that her own person would be manipulating and emotionally blackmailing her just to fulfill his selfish needs? If only she had known how cunningly he would shatter her dreams and break her down completely.

She began to see the true nature of things when he could no longer keep up his act. The fairytale she had been living all this while crushed to pieces, her bubble burst. He revealed his true colors. His purpose was served– to make her need him badly. She loved him deeply and wouldn’t find it easy to leave him or walk away from her dreams– and he knew that too well.

Deep down, she was aware of this truth, but she refused to admit it into consciousness.

She refused to accept that he was, in reality, poles apart from the man she had fallen in love with. Bit by bit, she witnessed how he transformed into that monster she had meant to stay away from all her life.

She was in denial because she was aware of how her life would turn upside down if she accepted the sad reality. And her current life would become the type that had always filled her with dread. She was scared of acknowledging how broken she might be after being in a relationship with an emotional psychopath.

Hence, she gave him chances after chances, hoping the next time he would be a changed man. But all in vain! He kept on abusing her, and this non-stop molestation drained the last drop of strength until she became hollow– a mere shadow of her former, beautiful self.

Read Dear Selfless Women, This is Why we Attract Men who Need Fixing