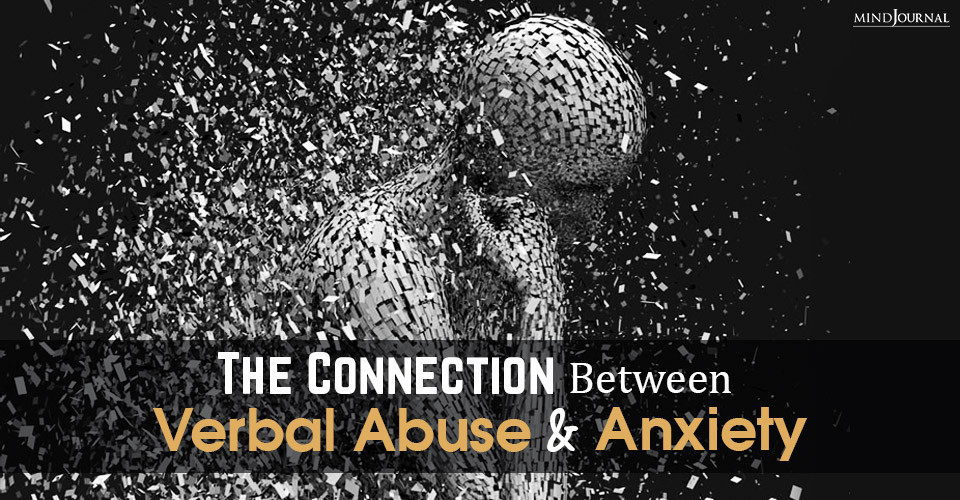 There are many studies that link verbal abuse, alongside other psychological and emotional abuse with anxiety and other mental health issues.
“Sticks and stones may break my bones, but your words they’ll destroy me.”  – Cassandra Giovanni

You might be in a toxic relationship where your partner has been verbally abusing you for a long time and you have simply shrugged it off or worse still you weren’t even aware of it as abuse.

Does your partner tell you things that you find humiliating?

Does your parent yell at you for trivial matters?

Does every conversation with your partner leave you feeling worthless?

Do your friends call you names?

Is your partner often too critical about you?

Verbal abuse, among other forms of abuse, like sexual abuse, psychological abuse, emotional abuse, and physical abuse, is quite difficult to discern. The reason being its subtlety.

Many instances of verbal abuse are nonchalantly avoided because reacting to verbal abuse seems too far-fetched to people. We rationalize verbal abuse like “It’s natural to have word fights then and now in a relationship.” Verbal abuse from parents is often encouraged, like “Yelling and screaming at children is a necessary means to discipline them.” Name-calling among friends is most often an example of fun and playfulness. But what we fail to notice is that we are indirectly perpetuating verbal abuse.

Verbal abuse: When words can kill.

Verbal abuse is the use of derogatory or negative language as a means to humiliate, belittle, criticize and demean a person. Verbal abuse is always meant to manipulate, threaten, harass, embarrass, insult and exercise control on the victim.

It triggers anguish, distress, pain, and feelings of worthlessness in the person to whom it is directed.

The tendency to abuse someone verbally mostly stems from passive aggression that a person has been suppressing for a long time. There is a sense of relief, a subtle sadistic pleasure that an abuser draws out of putting other people in a miserable state of feeling. Often a verbal abuser will laugh at dark jokes they throw at you, even when it has visibly hurt you.

Therefore, it’s not always mandatory for verbal abuse to be overt, direct, loaded with active aggression. It can also be insidious, masked, and expressed with feigned concern which makes it difficult to be identified.

“You must take care of the blob of fat growing on your stomach. Just making a suggestion, you see. Staying fit helps.” This statement, for example, sound innocent on the surface but has underlying aggression to it. The first line was clearly meant to downgrade you. It was not meant to display concern for you.

A verbal abuser uses varied and multifaceted tactics to inflict the hardest blow on the victim. Sometimes they will use these techniques with the combination of other lethal techniques to completely destroy the victim.

Mentioned here are 10 common patterns of verbal abuse used to manipulate their victims:

Demeaning comments are specifically meant to attack your race, gender, background, community, lifestyle, personality, etc. It could be any statement meant to make you feel insufficient, insignificant, or worthless about yourself.

For example: “You are such a pussy.” “Are all women cry babies, like you?”