Covert Verbal Abuse: Is Someone Telling You How You Should Feel? 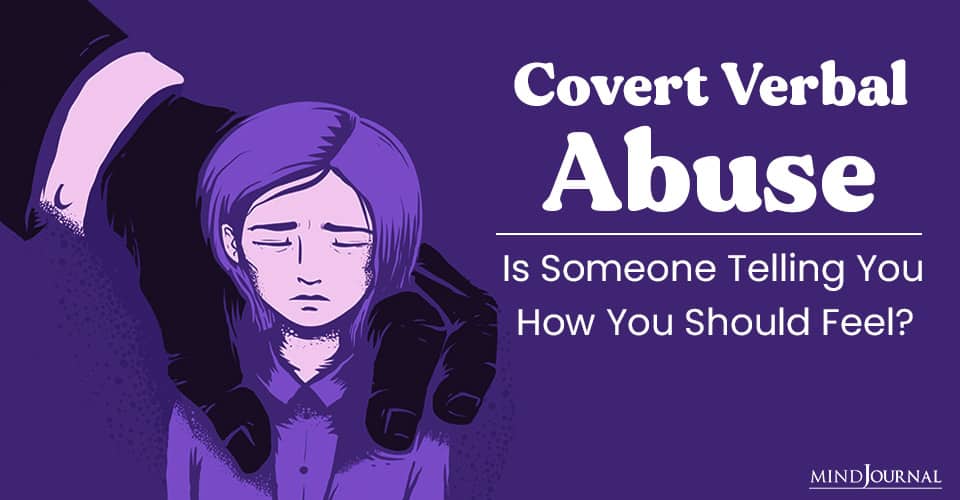 Covert verbal abuse happens when a seemingly benign remark goes under your radar. You don’t see it for the abuse it is. You get used to it.

Covert verbal abuse happens when someone tells you how you feel, what you think, or what you need or want. It’s sneaky. You might not see it as abuse…yet. You soon will. Keep reading.

Is there someone in your life who acts as though they own you and they know you better than you know yourself? Yes, even some parents of adult children do that:

“You’ve always been too sensitive.”

“You never were able to handle the truth.”

If there is a “should” in there, there is likely a problem!

Do you ever think–or say: “How dare you tell me how I feel!” Or, has it become such a pattern in your relationship with your mother, father, partner, or ex that you immediately start considering what they are saying as the truth? That happens when you are used to being abused. And, yes, it is sneaky, covert, and it’s going under your radar.

Right now, stop. Think of the relationship that is driving you crazy. Is that person telling you who you are, and what you think and feel? Do you hear the word “should” from them way too often?

This is covert verbal abuse. (If you want to know more, join my closed Facebook group: Optimize Life)

I know, who wants to think of themselves as being abused? Especially not when they hadn’t noticed what was really going on!

Some of us become so used to abuse that we can even justify it when it comes our way. Yes! As children, we became so used to being defined by our parents, that it was not a stretch to move on to having partners who continued the tradition. It felt familiar. It was familiar. And, it seemed normal.

Read: There Is One Person You Will Never Get Over

It may seem normal, but it is NOT acceptable.

As this idea begins to sink it, you may resist it. You might think: “S/he really cares about it and doesn’t want me to make a mistake.”

Are you an adult? If so, most adults are quite capable of deciding:

And, if they are so used to being told these things, today is the day to recognize that you are capable of standing up, speaking out, and saying,

Taking back your life may be a gradual process, but it starts right there. Soon, you’ll see how others are exerting power over you, and you’ll no longer let them.

Read: The Reason Why It’s So Hard To Get Over Almost Relationships

Saying “NO!” to covert verbal abuse first requires recognizing it. Then, keep a lid on your anger.

Yes, I know, you’re going to be angry and rightly so. Once you see the game, it’s impossible to unsee it, and you’ll be angry that you’ve put up with it for so long. That anger is healthy, but if you let it fly, you’ll have a host of other problems. So, don’t do it!

Once you recognize that someone is trying to control your life, get help.

So often, my clients tell me that they had tried to work things out or get over things, on their own. Then, they tell me how relieved they are to finally have the insights, strategies, and support to make positive changes in their relationships…and, therefore, in their lives. You are your best investment. Remember that.