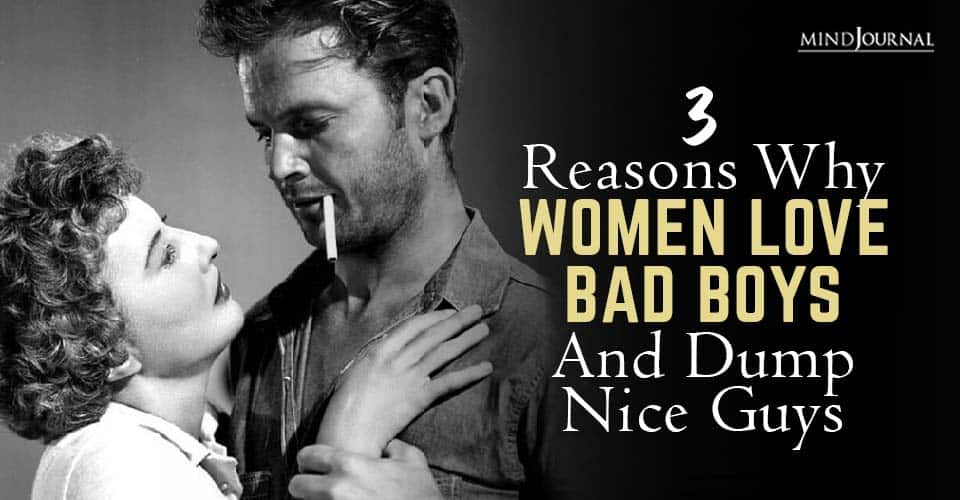 Women love bad boys, but what is it about them that women are drawn to? Despite knowing that getting involved with bad boys will end up breaking their hearts, women still choose to love them and be with them. What is this magnetic attraction that women feel, that makes them fall in love with bad boys?

Bad Boys have THE reputation: hot, good looking, scruffy but also cocky, arrogant, inconsiderate, inattentive, and almost unfeeling and women flock to them.

Bad Boys are the reasons that shows like True Blood and books/movies like Twilight have been so popular.

With all the negatives about Bad Boys, what are the real motivators for women to have a one-time or recurring want/desire for a Bad Boy in their life?

Are they just trying to attain the unattainable? Is it the challenge of making him fall in love—to “capture” him? And, where does this leave the Nice Guy?

I asked these questions to over 500 women, a number of other relationship experts, and as many self-proclaimed Bad Boys that would participate. The results were eye-opening.

First, a clarification. There were a few respondents that wrote in about their Bad Boys through their writing, it became clear that their version of a “Bad Boy” was actually a criminal.

While I’m sure there are similarities, for the purposes of this discussion I was most interested in the Bad Boy that started smooth, cool, mysterious, and loving but ended up emotionally unavailable, unattainable even stretching into emotionally abusive.

The stories discussing criminal behavior have not been included.

The most interesting thing I encountered was the difference between what the experts say, and the experience of women who dated the Bad Boys.

From accredited psychiatrists, the source of these issues was clear: comes back to the woman’s father.

Related: 6 Reasons Why We Are Addicted To The Bad Boys And Men Who Hurt Us

From Carole Lieberman, M.D, a clinical psychiatrist and author of Bad Boys: How We Love Them, How to Live with Them When to Leave Them:

“The main reason women are attracted to bad boys is because of the relationship they had with their fathers when they were little girls, that made them feel unlovable, not good enough to attract a prince.

So they end up kissing a lot of frogs.

Other issues play a part, but the main fundamental, underlying, most important issue is their relationship with their dads.”

And it was those “other issues” that the women I connected with really honed in on.

Yes, there were a few women who attributed their Bad Boy addiction to their upbringing and/or challenges with their fathers specifically, and to Dr. Lieberman’s point, with extended therapy others may follow suit.

However, the majority of women who responded to my survey stated some very specific reasons why they were attracted to Bad Boys.

This topped the list, but I would argue that the other reasons mentioned (below) contribute to the quality of sex with a Bad Boy.

There were many mentions of a certain “look” of the Bad Boy. The notion of a “look” coincides with a study by the University of Michigan’s School of Public Health in 2007.

To wit: Women were asked to judge potential mates by how masculine their features are, new research shows.

Men with square jaws and well-defined brow ridges are seen as good short-term partners, while those with more feminine traits such as a rounder face and fuller lips are perceived as better long-term mates.

In the study, 854 male and female subjects viewed a series of male headshots that had been digitally altered to exaggerate or minimize masculine traits.

The participants then answered questions about how they expected the men in the photos to behave.

Overwhelmingly, participants said those with more masculine features were likely to be risky and competitive and also more apt to fight, challenge bosses, cheat on spouses and put less effort into parenting.

Those with more feminine qualities were seen as good parents and husbands, hard workers and emotionally supportive mates.

Despite all the negative attributes, when asked who they would choose for a short-term relationship, women still selected the more masculine-looking men.

The possibility of converting a Bad Boy from a serial playboy into a loving, supportive, feeling man was a strong pull for Bad Boy-addicted women but it’s also the reason some women left them.

From one anonymous respondent:

“My motivation for dating bad boys is the fire of attitude they bring to the table.

The challenge is what brought me to them, but the fire of never knowing what’s next, and them being great in bed is what keeps you with them for a short period of time.

I could never stay with him for long because what attracted me to him is inevitably what made me leave him in a few weeks. Who wants a challenge forever?”

Since I am constantly putting myself through personal- and self-tests (and consider myself to be an ardent perfectionist), I am finding that with him, he’s just another puzzle I’m trying to solve.

This was also definitely a wolf in sheep’s-clothing case, too. He swept me off my feet in the beginning: long engaging discussions, expensive dinners, the works.

But then once decided he had me at the palm of his hand, the fangs came out and he truly revealed his manipulative and misogynistic ways.

Not sure exactly how many details you are looking for, but to answer your overall question, I would have to say that I am still into him because he is such a challenge.

Not trying to change him by any means (threw that out the door months ago) but instead, trying to see exactly how much I can learn (about myself) from him.”

Doing something that was against the norm (or against parents’ wishes) was also sited as a key motivating factor.

Doing the wrong thing has an appeal, even if it’s only for a short time or you drop the Nice Guy:

“I always dated the studious, square type of guys that were perfect gentlemen and rather bland in the masculinity department.

They tried so hard to “be nice” that they came across as wimpy. This guy was totally manly in every sense of the word.

My response to him was on a cellular level. But what KEPT me around him was the thought that I was sneaking and doing something I knew my parents wouldn’t approve of at all. I did it though because it was one of the very first things in my young life that I did because I wanted to, with no regard for whether I was being “a good girl” or “doing the right thing.”

It is a phase that all young females must go through on the road to self-actualization and independent thinking as a mature woman.

We have to cover the full spectrum of manhood to figure out which one WE like best, and not choose a man strictly based on assuring the approval of our family and friends. It’s a hard road!”

The one thing that was mentioned only by a few respondents—and one expert—is (in my opinion) the most important thing to consider when evaluating a woman’s choice of a Bad Boy: self-esteem.

Society in general—and the media in particular—LOVE to paint the Bad Boy as the black hole of masculinity.

That is to say, that nothing can escape them… no woman can resist their magnetism, no Nice Guy is nice enough to keep a woman away from their pull.

In truth, it’s women who have the complete control of the “magnetism” of these men.

Related: 10 Things A Good Guy Won’t Ever Do To The Woman He Loves

Sure, some of it is primal (read: “Can this manly man take care of me, and bring food to the table?”) but it’s up to women to realize that they not only should be wanting more than what the short-shelf-life Bad Boy can provide them, but they also deserve more.

And while some women are trying to figure out if it’s a good idea to marry them, others are looking at their motivations.

“During the last 25 years, I have interviewed thousands of women who have been in relationships with men who treated them disrespectfully. Some of them married several of these men.

Why? The women I interviewed had, as children, been treated in ways that lowered their self-esteem.

Consequently, as adults, they tended to fall into relationships that were consistent with what they were accustomed to, with men who treated them in ways that were familiar.

They then set to work trying to meet the man’s needs and make the relationship work better, very much in parallel with what they did as children.

They were accustomed to getting back far less than they gave and that pattern continued into the adult years. It was only when their self-esteem improved that they would recognize they deserved better.”

Want to know more about why women love bad boys? Check this video out below:

Self-esteem, the method by which Bad Boys rise to perceived greatness, and take advantage of situations with women.

And it’s important to note that Bad Boys come in all shapes, sizes, and ages. As many women (and men) can attest to, age does not always equal maturity.

But where does this put the Nice Guys? Well, as cliche as it sounds, they DO finish last.

From Gwen, a respondent and author of If It Walks Like A Duck, And Other Truths My Mother Taught Me:

“When I was 19, I dated this amazing guy. We attended different universities (about three hours apart), and he would make late-night trips after class and work just to visit me for a few hours, then go back.

He’d send me flowers for no reason at all, gifts just because he was thinking about me. He never pressured me for sex and we never slept together.

It was very pure and innocent love. I broke up with him because I thought he was ‘too nice’. Everything with him was ‘too easy’. I broke his heart, but all that mattered to me was that I wanted someone more fun and exciting!

From ages 20-26, I had a steady string of bad boys: unattainable men who provided me a challenge. One was a mama’s boy who didn’t seem to know how to get from under his mom’s thumb, another was a serial cheater that I knew about but thought I could change him (boy, was I wrong!).

A third was a gullible guy who listened to everything his friends told him and never to me, and the fourth was a serious emotional abuser.

They were all great at first, but of course, they changed after a few months, much to my dismay. After the final one, I was tired of trying to change guys and mold them.

From then on I decided, “No more projects!” I wanted a guy that was already together, that didn’t need to be trained and knew how to treat a woman like a queen.

Needless to say, I got him… in that very same guy, I dated back when I was 19. I thank God every day that He put it my guy’s heart to give me another chance. And he hasn’t changed one bit.”

The power, influence, and charm of a Bad Boy can be enviable, but I’m hopeful that those “powers” can be channeled for good, and allow men to move past these modes of false masculinity in order to embrace how to truly treat a woman beyond short-term excitement and empty flattery designed to coerce them into bed.