Signs of Verbal Abuse And Health Problems Caused By It 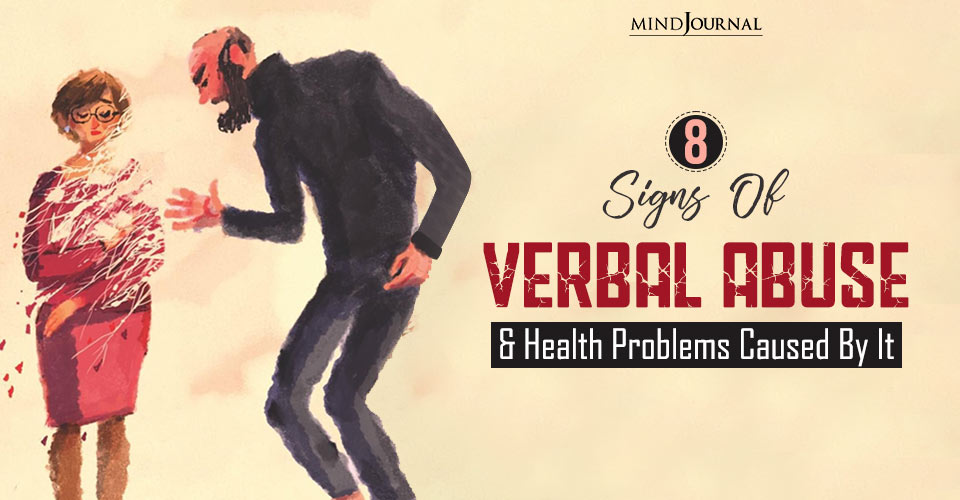 The signs of verbal abuse are usually invisible to the outside world. Even though it’s not physical, it can take a heavy toll on the life of an individual.

Verbal, emotional and mental abuse eats you alive from the inside out. Abuse can do heavy mental damage and cause mental illnesses like depression, anxiety, and PTSD. Those illnesses have visible symptoms, but after developing the illness, no one but your closest friends may notice. (If you still have friends after being isolated!)

So, the signs of verbal abuse are often felt instead of seen.

Abusers are very conscious of what they do to you. If they didn’t know what they did, abusers would fix their words and behaviors. Especially after you point them out. Healthy people don’t want to hurt others. Hurting others is how abusers survive.

Because the abuser knows what he’s doing, your partner expects you to be silent about the problems you have at home. Abusers want to project a happy family image. If you appear unhappy or talk about why you’re unhappy with outsiders, the abuser gets embarrassed (and mad at you).

Many, if not most, controlling people have an “adoring public.” People at church, work, PTA, in the neighborhood and in the community at large may think your abuser is the bees knees. The abuser often uses his stature in society as a means to further control and isolate you.

Read 10 Common Patterns Of Verbal Abuse To Watch Out For

Who would believe you if you told about how he acts at home? If you thought, “No one” then your abuser has effectively isolated you to the point of despondency.

Your abuser knows some of the signs of verbal abuse, so you are not allowed to show them. Outside of the house, you’re expected to be happy. To be a good parent. To have beautiful, smart, popular children. The abuser expects to see you happy because if you aren’t, people may wonder about the abuser. We can’t have that, now can we?

Symptoms and Signs of Verbal Abuse

The thoughts and feelings victims of abuse often feel are cumulative, built on doubt and humiliation over time. Verbal abuse is sneaky, hidden in the words of someone who says he loves you. It takes a while, sometimes a long while, for victims to notice how they’ve changed into a traumatized and pained shadow of their former selves.

There are some common symptoms and signs of verbal abuse that victims share. They’re internal and unseen by any outsider the abuser brings near his happy family.

Related: The 7 Types of ‘Quiet’ Verbal Abuse That Are Hard To Notice

Kellie, once an abused wife, passionately advocates against domestic violence through her writing and mentoring service. She loves helping women cope with abuse while in the relationship and supporting them as they leave the relationship and begin to heal. Kellie originally wrote the blog 'My Abusive Marriage...and what I'm doing in it' during the last year of her abusive marriage as a way to fight against her husband's crazy-making and gaslighting. Her second book, also based on the blog, will release in January 2015 and describes the healing process after leaving the abusive relationship.View Author posts