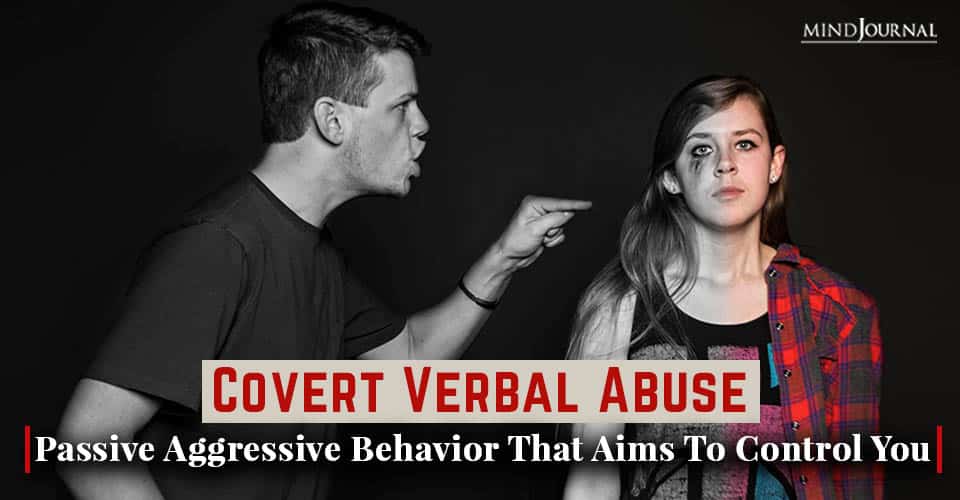 Believe It Or Not, Verbal Abuse Is A Planned Event. He loves to ruin your birthday and holidays.
Covert verbal abuse is subtle aggression.

It’s aim is to control and dominate you without you knowing. If you’ve never been exposed to the insidious nuances of a covert verbal abuser, you may not realize what is happening to you.

Men, flip the dialogue. Women are often abusive to their boyfriend or husband.

Covert abuse can be difficult for the victim to identify

because the perpetrator communicates in ways that are sly, vague, underhanded and confusing.

If the abuser delivers his message without anger or yelling, or he smiles sweetly while mocking his partner, or he passes his demeaning comments off as “constructive” criticisms, the victim is doubly perplexed. The abuser’s tone of voice may seem normal, but if you listen closely, a trace of criticism or contempt can be heard.

For example, the abuser ridicules his partner in public with sarcasms disguised as “jokes.” “You’re so easily entertained,” he quips in front of friends (insinuating that she is dim-witted and easily amused), or “Don’t bother trying to explain it to her; it’s over her head.” He laughs contemptuously while delivering her a left-handed compliment, e.g., “I like your dress; it does wonders for your figure,” and “You’re really smart for a woman.”

It unconceivable to a woman that her boyfriend or husband (who says he loves her) would PURPOSELY demean or ridicule her in front of her friends or family and so she dismisses his unkind remark, telling herself she’s over-reacting, he didn’t mean it and so forth.

A covert abuser uses guileful actions to demoralize his victim.

He consistently forgets the things that are important to you which devalues you as a person. He accidently on purpose forgets to pick up the dry cleaning or make a household repair.

He procrastinates to frustrate you and keep her under his thumb. He refuses to give you a direct answer to a direct question. He says, “We’ll have to wait and see,” or “Maybe,” or, “I don’t know how,” and “I didn’t know I was supposed to.” If you get upset with him he compounds your abuse by telling you, “You’re too sensitive,” or “You’re impatient” or “You don’t trust him.”

When Dr. Dirtbag jabbed me with his subtle cutting remarks, I struggled to explain his hurtful behavior to my girlfriend Annie. Annie listened and then she said, “Nancy, I think you’re over-reacting. Look at everything he’s done for you. You know he loves you deeply. You need to toughen up and give this guy some slack. If you don’t, you’re going to run him off.”

I couldn’t seem to make Annie understand the extent of his wounding actions because I didn’t fully understand it myself.

Read: No! Hell No! Verbal Abuse Disguised as Jokes

Part of the problem was, it wasn’t “what” he said that was so ruthless; it was his condescending tone of voice and scornful expressions that cut like a knife.

It was easy for me to believe that I was the one in the wrong given my past relationship failures. So I accepted Annie’s explanation. I sucked up my hurt feelings. I forgave Dr. Dirtbag and I tried harder not to react to his erratic verbal assaults.

It is unimaginable to any woman that the man who professes to love her with such passion and devotion would knowingly want to berate, demean and dominate her.

Run to Kinko’s, print a 1000 copies and wallpaper your bathroom with the following!

Read: No! Hell No! Verbal Abuse Disguised as Jokes

There is an anecdote which describes a frog being slowly boiled alive. As the story goes, if you throw a frog into a pot of boiling water, he will immediately feel the heat and jump out. But if you put a frog in lukewarm water and slowly turn up the heat, he will not perceive the danger and he will be cooked to death.

And so it is in abusive relationships.

The naïve or co-dependent woman minimizes and denies a man’s hurtful behavior. She covers up his abuse to her friends and family.

She suppresses her emotional pain, fear and depression. She gradually adapts and adjusts to his harmful behavior and she remains in an abusive relationship that is slowly destroying her.