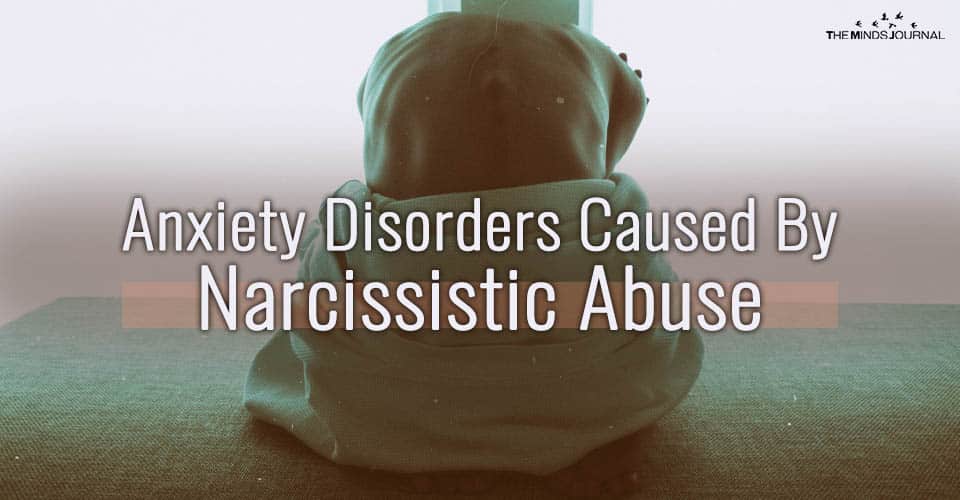 Did you know that a lot of or sometimes the majority of anxiety disorders are caused due to exposure to narcissistic abuse?

The most common targets for social abuse are highly sensitive and emotionally intelligent people who are by nature prone to behaving like humanists. People who are of lesser social means (meaning less socially powerful or influential) are also likely targets, too.

If you live in a home where abuse is prevalent, expect your health to decline and your self-conception to suffer. Being told all the time YOU are the problem for reacting to abuse in ways that are actually emotionally intelligent and PHYSICALLY appropriate tends to cause victim self-identity to suffer.

If you feel like you are unsure whether you over-react to abuse or you are justified in being upset when you are lied to, conned by a love fraud, are cheated on, are beaten or sexually assaulted, threatened with murder, etc… your mind and body are already experiencing symptoms of extreme Complex Post Traumatic Stress Disorder or C-PTSD.

Chances are you are likely to be developing a form of Stockholm Syndrome based on trauma bonding with your Abuser. When and if a trauma bond forms, the biology of the human form does a couple of things.

If you are healthy and sane, you will tend to trust your own eyes and ears as well as sanity. If you catch a partner cheating, for instance, but they blame YOU? Or an Enabler tries to convince you that your abuser loves you in their own way? Or they tell you that physical assault is for your own good?

Seriously, if you believe them you are already likely to be living with adrenal fatigue and heightened forms of pervasive social anxiety soon.

The following list of anxiety disorder types was compiled by the Mayo Clinic.

It is a type of anxiety disorder in which you fear and often avoid places or situations that might cause you to panic and make you feel trapped, helpless or embarrassed.

2. Anxiety disorder due to a medical condition

This includes symptoms of intense anxiety or panic that are directly caused by a physical health problem.

This includes persistent and excessive anxiety and worries about activities or events — even ordinary, routine issues. The worry is out of proportion to the actual circumstance and is difficult to control and affects how you feel physically. It often occurs along with other anxiety disorders or depression.

Have you ever experienced an anxiety disorder due to narcissism? Read Anxiety Disorders Could Be Caused By Being Exposed To Narcissistic Abuse

This involves repeated episodes of sudden feelings of intense anxiety and fear or terror that reach a peak within minutes (panic attacks). You may have feelings of impending doom, shortness of breath, chest pain, or a rapid, fluttering or pounding heart (heart palpitations). These panic attacks may lead to worrying about them happening again or avoiding situations in which they’ve occurred.

This is a childhood disorder characterized by anxiety that’s excessive for the child’s developmental level and related to separation from parents or others who have parental roles.

It involves high levels of anxiety, fear, and avoidance of social situations due to feelings of embarrassment, self-consciousness, and concern about being judged or viewed negatively by others.

Specific phobias are characterized by major anxiety when you’re exposed to a specific object or situation and a desire to avoid it. Phobias provoke panic attacks in some people.

This is characterized by symptoms of intense anxiety or panic that are a direct result of abusing drugs, taking medications, being exposed to a toxic substance or withdrawal from drugs.

Folks who actively abuse and enable other abusers love telling their abuse victims that they are somehow socially, emotionally, and intellectually deficient. They are huge fans of abusing the crap out of their target, then when caught or confronted about their behavior choices, they love nothing more than playing the victim.

The more extreme the personality disorder the more likely social predators are to enjoy harming or humiliating and dominating other people.

Not only do they expect their willing Narcissistic Supply Sources to consistently play sub-servant, they wholeheartedly expect and demand total obedience from any preferred scapegoat they like to claim ownership of and to toy with them psychologically and emotionally, on a regular basis.

People who get trapped in the cycle of narcissistic abuse tend to know something is not right with the claims a Cluster B person makes. But unless they are well educated about things like how to spot the warning signs of a Cluster B pack or egocentric abuser, fraud tactics, verbal abuse, and mind control tactics, predators make incredible logical fallacy statements and appeals to emotion that sound — at least plausible — to an unaware listener.

If a target makes the mistake of reverse projecting and presumes that all human beings — INCLUDING CLUSTER B PEOPLE AND VERTICAL THINKERS — have the same core values as roughly 75-80% of the global human population, that is the instant chaos manufacturers or pot stirrers have the ability to start mind assaulting trouble.

People who are exposed to physical abuse, sexual assault, verbal assaults of a poignant or pervasive nature, financial abuse, social persecution, and the word choices of dehumanizers seeking to sadistically or callously persecute, tend to develop extreme social anxiety, pervasive stress-related illnesses, and extreme confusion over knowing they are good folks in their heart and mind but hear constant ad hominem attacks against themselves by bullies and manipulators all the time.

If you are being harassed, bullied, messed with at work, are being picked on by family members who display Cluster B behaviors, an ex has done some crappy thing like tried to smear campaign, or worse…

Or you are feeling the literal weight of an angry and hostile narcissistic led faction world.

You are not alone in suspecting being around mean people can damage your health. Verbal assault can lead directly to neurological damage to the part of the brain that houses complex emotional reasoning centers. Additionally, body fatigues and organ function are medically depleted by the fear-induced surge of toxic adrenal chemicals.

The life-threatening illness tends to develop in humans who feel TRAPPED by an Abuser (unable to flee) or who are held hostage by toxic thinkers seeking to silence and oppress their scapegoats, targets, and control the fear-based psychology of their toys as well as any collateral damage victims.

[Abusers tend to rage at anyone who offers one of their preferred scapegoats targets humanitarian aid or social support. Doing so tends to produce the effect of socially isolating their targeted victim while humiliating and truly frightening them further when and if people passively choose to stay out of it or to enable, leaving the target even more vulnerable to further pervasive overt (as well as extreme covert) situational abuse. ]

Healthcare workers need to realize that if a patient presents symptoms of stress illness and psychiatric symptoms then the patient is more than likely showing physical signs of complex psychological and emotional duress.

This is more than likely being caused by ongoing exposure to Narcissistic Abuse or an Ambient Abuse promoting environment. It is beneficial for all patients if human beings of neurotypical nature are likely to be able to end the healthcare crisis beginning to plague most modern nations.

If you want to know more about anxiety disorders caused by narcissistic abuse, then check out this video below: