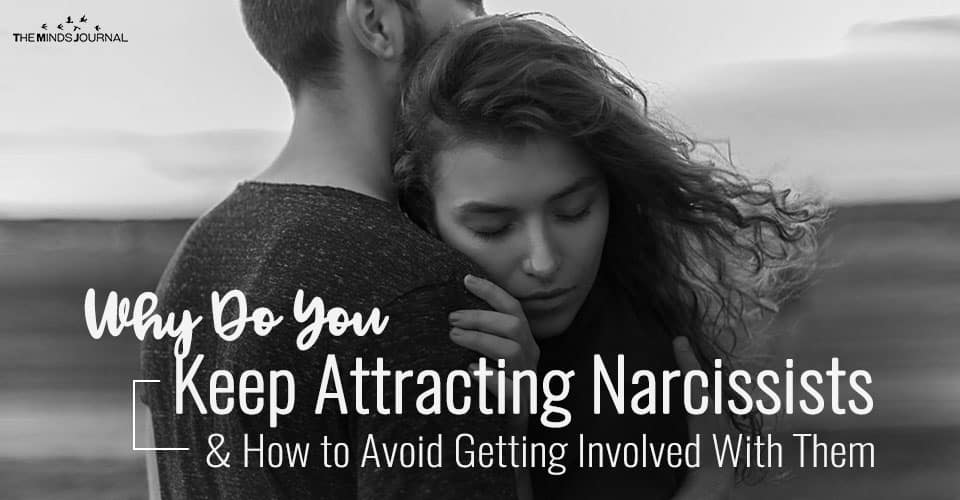 Do you tend to get attracted to narcissists, more than you think?

When it comes to love, you don’t always choose who you fall for.

Love can capture you anytime and any day, and that is precisely why love is beautiful. There is a catch, however; some people are lucky in love and some people are not. People belonging to the latter tend to go through many broken relationships and are left wondering about where and how they are going wrong.

Well, sometimes is it not you but the person you are choosing to be with, in a relationship. Narcissism has always been there, and there are many people who tend to get attracted to narcissists, without even knowing it. Narcissists tend to have that effect on you.

In the article below Dr. Elinor Greenberg talks about why some of us, attract so many narcissists in our life and how we can avoid getting involved with those, who mistreat us.

Why Am I Attracting So Many Narcissists?

Many people feel as if they are “narcissist magnets.” If there is a person with Narcissistic Personality Disorder within 100 feet, they believe that somehow that person will be attracted to them. They often ask me: “Why am I attracting more narcissists than anyone else around me? What can I do to stop this?” If you share this problem, I may have some answers for you.

It may not be that you attract more narcissists than other people, but you may be keeping more. Let me explain.

Let’s imagine that you are looking for a new mate. You go out on a date with someone that you find attractive and witty. After a few dates, you notice that your new romantic interest is exquisitely sensitive to slights, needs to be the center of admiring attention, ignores your feelings, and requires lots of reassurance about how great he or she is. You do not need to be able to diagnose a narcissist to be disturbed by this type of behavior. At this point, many people who have no knowledge of narcissism at all will politely disengage themselves from the relationship because the trouble of catering to their new friend’s needs outweighs any possible benefits. What do you do?

Here are some questions to think about:

If any of the above seems to relate to you, you probably need to revisit your standards of what you will tolerate from a romantic partner. This does not mean that you should never date people with narcissistic traits, but you do need to develop better strategies for sifting out those people whose bad behavior distresses you. Some people do this automatically. If they feel taken advantage of or uncomfortable, they exit the relationship without looking back. You may be giving the wrong people too many chances and staying with them for too long. This increases the likelihood that you are keeping narcissistic people that others would weed out before they got seriously hurt.

“How starved you must have been that my heart became a meal for your ego.” — Amanda Torroni

An Example: Tina and Bob on a first date

Tina was on a first date with Bob and enjoying his company. He was attractive and seemed to be very interested in her. They found lots of things to talk about and she could feel a strong physical attraction developing between them.

But, then Bob starting asking Tina some questions that she found too intrusive for a first date: “Why had her last relationship broken up? How many previous sexual partners did she have?”

Tina tried to change the topic, but Bob kept going back to ask her even more intrusive things. What he found amusing and interesting topics of conversation, Tina found painful and embarrassing. Bob was tone-deaf to Tina’s hints, so she decided to be more direct: “Your questions are making me uncomfortable. They feel too personal for our level of relationship. Let’s just enjoy our date together and talk about something else.”

Instead of just changing the topic or apologizing, Bob got defensive and attacked Tina: “I was just trying to get to know you better. Why are you so sensitive?”

Tina took this as a warning sign that she and Bob would not be a happy couple. She wanted someone who cared about what she felt, and it was obvious to her that Bob was too wrapped up in his own agenda to suit her needs. She ended the date early. Later, when he contacted her again, she thanked him but said that she did not think that they were well-suited and refused to see him.

Tina’s refusal seemed to heighten Bob’s interest. She received a flurry of flattering text messages over the next week asking her to give him another chance.

Giving Chase as a Narcissistic Response to Rejection

This is one of the typical narcissistic responses to rejection. The more Tina pulled away, the more Bob pursued her. For Bob, the ground had shifted. It was not that he liked Tina more than before, but he felt the need to convince her to see him again. He hated that Tina had made the decision to dump him before he had decided to dump her. It became a matter of pride for Bob to get Tina back.

Many people get seduced back into relationships with narcissistic people because the person pursues them in what feels like such a flattering way. They mistake the narcissist’s desire to win, for love of them as an individual. This is a basic misunderstanding of what is going on. This pursuit has nothing to do with your good qualities or their positive feelings about you. It is all about the narcissistic individual’s self-esteem. At this point, they could care less about you and your good qualities. All they care about is winning.

“Withhold admiration from a narcissist and be disliked. Give it and be treated with indifference.” — Mason Cooley

Let me share with you a few basic rules that we can extract from the example of Tina and Bob that may help you avoid ongoing unpleasant relationships with people who have narcissistic disorders:

Rule 1: If you have already rejected them for bad behavior, do not take them back. It is highly unlikely that they will behave any differently in the future.

Another Example: Tara and Sam and the jewelry store

Tara is a very beautiful, very acquisitive, and very narcissistic woman. She and Sam had been dating for a few weeks. One day they were out together for a romantic evening and they happened to pass a jewelry store. Tara stopped and started telling Sam how beautiful everything in the window was. The store was open and Tara suggested that they go in just to look. Sam felt uncomfortable but wanted to please Tara so he agreed.

Tara stopped in front of the showcase filled with bracelets. “Oh Sam,” she said, “I hope you don’t mind if I try on a couple. They are so beautiful!” Sam did not know how to gracefully say “no,” so he instead said, “Of course. Whatever you want.” Tara tried on quite a few, then narrowed it down to her two favorite ones. She put one of them on each wrist, and asked Sam in front of the salesperson, “Which do you like best?” Sam felt trapped. He had not intended to buy Tara an expensive present, but once he said that he liked one better than the other, he somehow felt obligated to offer to buy it for Tara. Tara walked out pleased with herself and her new bracelet and Sam felt angry and miserable.

Sam liked Tara, but he had not realized until then how often she had manipulated him into situations where he felt taken advantage of. He realized that Tara was a very selfish woman who did not really care about him or his feelings. Sam decided that this situation was unlikely to change and that he did not want to pursue the relationship with Tara any further. He never asked her out again.

Devaluing is another Common Narcissistic Response to Rejection

Tara sent him a few sweet texts and thanked him profusely for his generous gift. When he did not respond, she became angry and then sent him a long, nasty, rambling text message that ended with her calling him “a miserable, cheap, heartless loser.” Sam was relieved that he had not stayed in the relationship longer.

You do not have to be able to diagnose someone as a narcissist in order to decide to get out of the relationship. Sam was not a diagnostician, nor was he sophisticated about psychology. He was, however, able to recognize when he felt uncomfortable and manipulated. Sam cut Tara out of his life because he had an idea of how he wanted to be treated and trusted his own sense that Tara was mistreating him in some way that crossed his personal boundaries. Her final insulting email just confirmed for Sam that he had made the right decision.

“The lion is most handsome when looking for food.” — Rumi

If being with this person makes you feel uncomfortable or they regularly maneuver you into doing things that you do not want to do, he or she is probably not right for you. Trust your own instincts.

Punchline: It is not a good relationship if you repeatedly feel bad.

Being with a narcissist is probably one of the worst things you can do for yourself and your mental health. They tend to always make everything about themselves, and seldom care about the other person and their feelings. So, the next time you feel like you are falling for someone, take a step back and analyze the situation properly. If it is a narcissist, then run as fast as you can from them!

Check out this video if you have always been attracted to narcissists:

Dear Empaths: 4 Types of Narcissists You May Be Attracting
5 Positive Traits In You That Attracts Narcissists
Shocking Reasons You Keep Attracting Toxic Love
The Kind Of Toxic Person You Attract Based on Your Zodiac Sign

Tags:in love with a narcissist