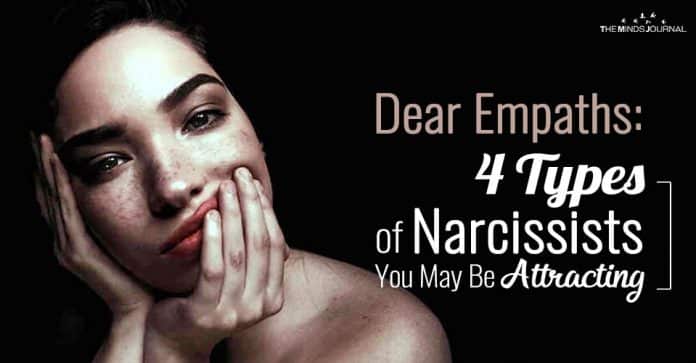 Dear Empaths: 4 Types of Narcissists You May Be Attracting

The types of narcissists, empaths attract:

What is it about narcissists that are so irresistibly attractive?

Like moths drawn to flames, us empaths seem to have a penchant for flying head-first into dangerous friendships and soul-sucking relationships that leave us feeling exhausted and unhinged. And yet, over and over again many of us fall into the same trap, often missing the vital life lessons being presented.

Almost every week Sol and I receive emails inquiring about the dynamic between empaths and narcissists. Having been burned by a number of different types of narcissists myself, I know just how easy it is to fall into the heavy gravitational pull of such people. Like black holes, narcissists eat away at your emotions, physical health, and sanity, profoundly manipulating and messing up your perceptions and sensibilities.

Why is it that empaths and narcissists – two diametrically opposed types of people – feel an almost magnetic pull towards each other?

There are many theories, but at the heart of it, I believe that it is Life’s way of restoring balance.

For example, let’s examine your typical empath. By nature, empaths are deeply caring, compassionate people. The empath’s purpose in life is to facilitate healing in others, yet due to their intense sensitivity, empaths often struggle to create healthy boundaries for themselves, giving in to martyrdom, victimhood, co-dependency, and chronic self-sacrifice. Now, let’s examine your typical narcissist.

Due to various traumas, core wounds, and conditionings, narcissists hide behind an idealized self-image which is expressed as being highly charming and attractive, yet deeply uncaring, indifferent, self-centered and cruel. Put empaths and narcissists together? Both come in contact with their “inverted/reverse” selves, and both are forced to learn, grow and heal as a result of such an experience (although this doesn’t always happen immediately, but through trial and error).

4 Types of Narcissists All Empaths Should Look Out For

So many articles out there talk about “protecting” yourself from narcissists. Unfortunately, this language promotes the disempowering notion that “other people are out to get you.” They’re not. People act within the limits of their conscious capacity, and sometimes that involves hurting others. The more you perceive yourself as a “victim” of narcissists/narcissism, the less capable you’ll be of truly owning your personal power as an empath.

A big part of owning this personal power of yours is learning how to identify different types of narcissists. The more conscious you are of them, the more consciously you’ll be able to behave and make decisions in their presence.

Interestingly there are actually two main types of narcissists:

These people are generally very sensitive and tend to be quiet or shy by nature. Yet to disguise their chronic feelings of self-loathing and unworthiness, VN’s overcompensate by putting on a grandiose mask, seeking to merge their identities with other idealized people. VN’s have an unshakeable need to feel special about themselves and have a little genuine regard for the feelings of others. VN’s are primarily motivated by fear of rejection and abandonment, thus don’t have the capacity to authentically love and care for others. Additionally,  VN’s use of emotional manipulation (such as shaming, guilt-tripping and gaslighting) to secure sympathy and attention from others. Their lives are fuelled by inferiority complexes which often stem from childhood mistreatment.

These people reflect the traditional image of the narcissist: that of a highly self-confident person, cold and unempathetic person. IN’s, unlike VN’s, are thick-skinned and shamelessly seek for power, glory, recognition, and pleasure. IN’s often suffer from god complexes, believing themselves to be far superior to everyone else – and they have a pathological need to make that known.

I was raised by a… Read more »

If your relationship involves the following behaviors, you might love a toxic person.
Read more
wpDiscuz
51
0
Would love your thoughts, please comment.x
()
x
| Reply