3 Sneaky And Scary Breakup Tactics Of A Narcissist 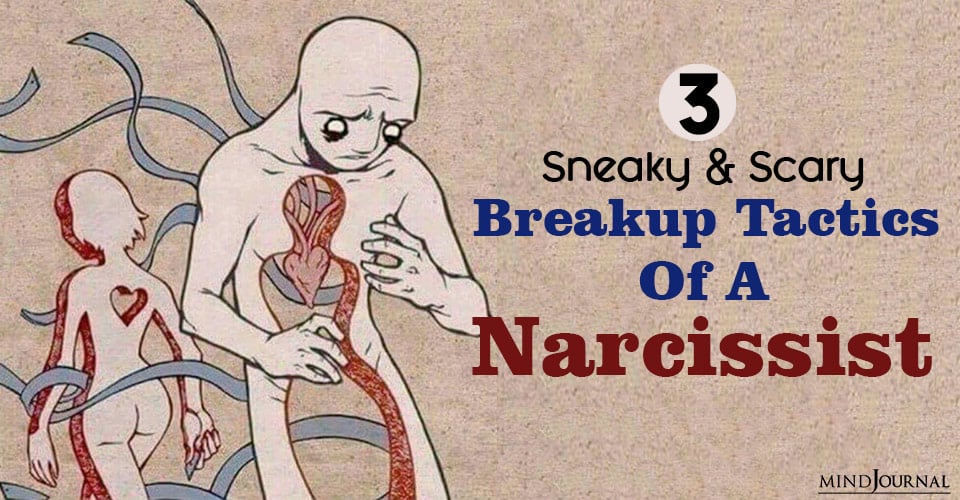 When a narcissist breaks up with you, don’t expect a normal breakup at all. A narcissist will employ various sneaky and scary breakup tactics to manipulate you, brainwash you, and then dump you for good.

When he believes the relationship is over, he will begin his “end game.”

A narcissist’s endgame tactics are varied. If he still sees value in the relationship he may try to win you back so he can resume his control and abuse of you.

He may suddenly turn nice and “promise to change,” stop drinking, enter therapy, or an abuser program. He may suddenly take care of the things that you have been complaining about. He may tell you “that you will be lost without him,” or “no one else will want to be with you.”

But if he believes you are permanently leaving him, he thinks you are seeing someone else or he is finished with you, you may be in for the “fight of your life.”

Be prepared for the following if you think your relationship is ending with a narcissistic man.

Here Are 3 Sneaky And Scary Breakup Tactics Of A Narcissist

1. He finds another “bedmate.”

A narcissistic man may have another relationship lined up before he dumps you and his behavior can change dramatically and overnight. He can become extremely unpredictable, withdrawn, hostile, and unfeeling and his abandonment can happen quickly and without warning.

When he makes up his mind that he wants to be with his new romantic interest, he may do outrageous things to get rid of you. And when he does dump you, there will be no apologies or expression of remorse because a narcissist does not feel guilt, shame, or regret for his reprehensible actions.

Related: 7 Signs You’ve Arrived as a Survivor of Narcissistic Abuse

When a narcissistic man believes that he can no longer control you or he is finished with you, he can become destructive and dangerous. He will use minor issues to set you up for extreme verbal or physical abusive events and his increased rage will seem to come out of nowhere and for no apparent reason.

He will say and do new and vicious acts against you. He will set you up for elaborate altercations to punish you, frighten you, and anger you so he can justify abusing you and be deserting you, all the while, the narcissist draws satisfaction from the drama and pain he creates.

Unknown to me, my fiancé (living 100 miles away) was dating another woman. He came to town and he took me to dinner; I thought it was like any other date night. Instead, he started the worst fight of our relationship at the restaurant, and then he physically assaulted me when we got back to my home. It was the deathblow to our relationship. I found out the following week his new floozy was already living with him.

The narcissistic man’s endgame can be treacherous and scary. He may throw things and strike objects near you to terrorize you into submission and he may destroy your treasured possessions to penalize you. He may threaten to harm your children, pets, or a family member. He may file false charges against you, report you to child services, or threaten to take the children away from you.

He may use his physical size to intimidate you, e.g., he stands in the doorway blocking your exit during an argument. He may make statements like, “I’ll break your neck” and then he dismisses his threats by saying he didn’t really mean it. He may threaten you bodily harm, stalk you, and show up at your work or home unannounced looking for a fight.

Related: 8 Things To Expect When You Break Up With A Narcissist

When Jackie broke up with her jealous, verbally abusive boyfriend, he stole her favorite clothes, jewelry, and perfume so she couldn’t “look good around another man.” He terrorized Jackie with endless threatening phone calls and texts. He showed up at her apartment drunk late at night, pounding on her patio door and windows demanding that she let him into her apartment and when she called the police he keyed the side of her car.

He left notes on her car’s windshield at home and at work, vacillating from, “I love you. Please give me another chance” to “I’ll kill you if I ever see you with another man.” In his mind, if he couldn’t have Jackie—no one would have her.

DON’T open the door to an angry man and DON’T underestimate the end game of a narcissistic partner.