The Female Facade: Female Narcissists May Be Statistically Uncommon, But Highly Dangerous 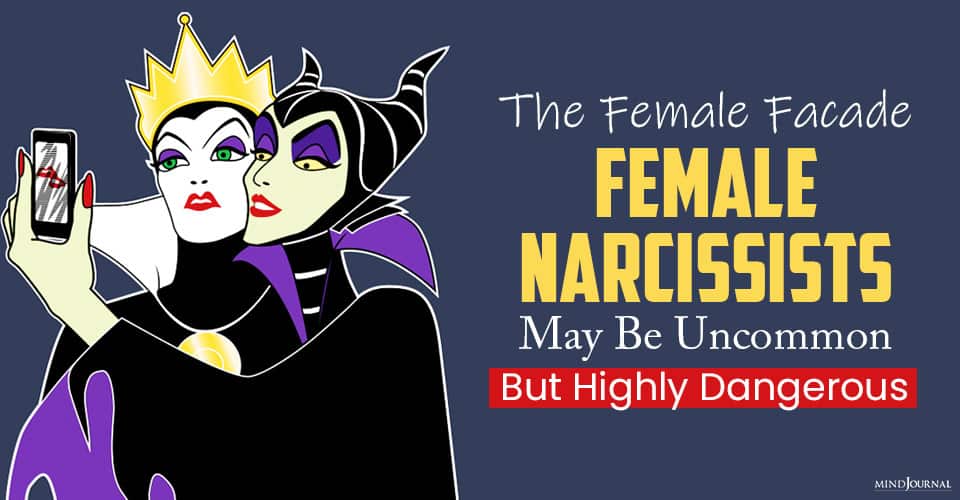 Even though it is believed that narcissism is found predominantly in men, the truth is women can also be narcissists, and they can be equally dangerous and can also play the same games like their male counterparts.

Female narcissists may be statistically uncommon, but highly dangerous.

Narcissism, like other mental illnesses or personality issues, is not confined to one gender or sexual identification. Although narcissism is prevalent in men, it is found among women as well. Per the American Psychiatric Association (2013), 50-75% of those diagnosed with narcissistic personality disorders are male.

Narcissistic Females Are As Damaging And Polarizing To Relationships As Are Their Male Counterparts.

Despite the similarities, women are not as widely discussed as male narcissists. Freud (1914) strongly believed that women were more narcissistic than men and in 1985 Irene Philipson researched the “disproportionate representation of men” as narcissists.

She argued that the term is applicable to both genders as both a personality type and mental illness and the gender bias must be addressed by the psychological and psychiatric fields. However, as recently as 2015, a study by University at Buffalo again reinforced the gender gap of narcissism. Regardless of age, men consistently scored higher than women in narcissistic traits (Grijalva et al, 2015).

Just because research shows males are more narcissistic than females, this doesn’t mean men don’t suffer at the hands of narcissistic women. The abuse that women report from their narcissistic romantic male partners is the same pain that men feel when the tables are turned. An individual can exhibit narcissistic traits but not be diagnosed as narcissistic. (NOTE: *In the voluntary interview responses below, neither woman was officially diagnosed as having NPD.*)

Narcissistic individuals are capable of intricate facades and carefully crafted lies no matter their gender. Aaron, 45, considers himself lucky after divorcing his narcissistic ex-wife. After meeting his now-ex, he was impressed with her presentation of being intelligent, accomplished, and physically attractive.

“I fell for the act she put on,” he recalls. Jacob, 60, has been with his narcissistic wife for over 15 years. He, too, was attracted to her “physical draw” and “presumed intellect.” However, once both men were firmly entrenched in the relationships the facades began chipping away.

Both Aaron and Jacob were treated as passive, supporting actors in their relationships. Aaron’s ex-wife was cheating on him throughout the marriage and wouldn’t entertain the thought of a divorce until she was the one who suggested it. “She played with my emotions for a few months until she told me she wanted a divorce, and I gladly said yes,” says Aaron.

Jacob says his wife pushed harder for the relationship than he did, even going so far as to suggest they get married and then – despite no clear proposal or answer – “we were suddenly engaged.”

Sadly, This Is Common For Narcissists Because They Do Not Believe There Is Anything Wrong With Them.

The grossly inflated egos combined with a victim mentality means the narcissist is never at fault.

Jacob’s wife told him “she liked fighting”, and any fight they had “was transformed into an issue that had her at the center as the victim”. According to his wife, Jacob was always wrong, and she never needed to apologize. Whereas Jacob has been involved in therapy and frequently expresses his willingness to communicate with his wife, she refuses to participate and says she “isn’t broken.”

Similarly, Aaron suggested counseling while he was married to his narcissistic ex and even paid for it in full; his ex went to two sessions and said she “didn’t need it.”