What Breaking Up Teaches Us About Life and Ourselves 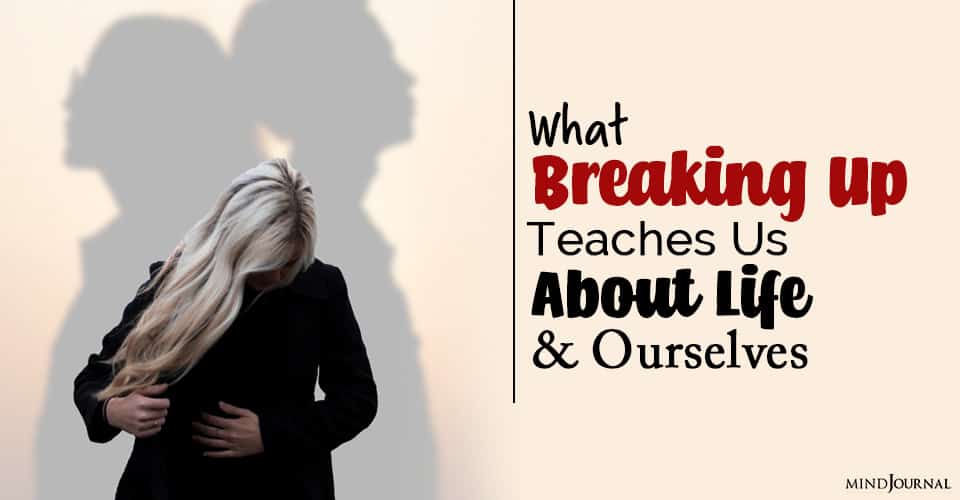 Breaking up with someone you love can not only be tragic, devastating, and heartbreaking, but it can also be enlightening. A breakup can often teach you a lot about yourself, your personality, and your insecurities regardless of whatever reasons it had to end. It allows you the opportunity to understand yourself and pursue personal growth so that you don’t repeat the same relationship mistakes again.

In my life, I have experienced romantic heartache on more than one occasion. While I wouldn’t choose to relive those experiences, I also wouldn’t trade them for anything.

The first time it happened I was 17.

I say it “happened” because I felt like I was witnessing some sort of cosmological event to which I was a bystander. It wasn’t really a breakup because we weren’t really a couple. We were just smitten teenagers navigating the very smudginess of love with many with miles between us, trying it on for the very first time. It was hard.

At some point, that love became untenable and suddenly this undefined relationship… was over. The instantaneous demise didn’t feel like something I had any agency over. I was a victim, a casualty. I was in the midst of some great misunderstanding. The unresolved conflict confused me. The constriction of my chest overwhelmed me.

I remember sitting in my kitchen and writing a desperation letter by hand on a white-lined pad. Three pages in my brutal, meandering print, to this girl two states away who had turned me manic with feelings. I had never felt such volatility inside me.

It was my first indicator of the emotional turbulence a romantic relationship could bring.

The feeling of heartache

Four years later I would have a similar experience, only heightened, broader and more profound. This time with a girl I had known longer, was closer to, and had been in an official relationship with. And when that relationship ended, I moved home to the other side of the country thinking that would shelter me from any kind of emotional fallout.

Everything I thought would make breaking up easier, the distance, the detachment, only drove me further into my own head. Facebook removed the blissful ignorance I would have otherwise enjoyed. I was now a spectator to the digital reflection of my ex-girlfriend’s current life.

The feeling of heartache was not unfamiliar but it was certainly unwelcome. The generalized pseudo-depression impacting every moment of my day. The possible regrets. The very specific and localized heart pain. I could not understand why I was so unhappy when this had been my decision.

I was naive in matters of the heart. I always have been. I did not realize breaking up meant mourning; actively participating in the processing of one’s feelings. I did not mourn. I moped. I pined and wondered. I was controlled by internal tides of desperation and anger.

My guides through this time were my friends. Nascent adults the same age as me without much more experience to speak of. I didn’t have a clear model for grief and recovery. How did other men deal with this? I had few male friends, to begin with. I had never witnessed them in my scenario, up close and personal.

Read 18 Reminders After A Relationship Ends and You Are Hurting

Two hundred percent of myself

In the middle of this experience, I returned to my college for homecoming. Over beers with a couple of guys older than me the subject of therapy came up. “I love it,” said one. “I feel like 200% of myself,” said another.

I had started to consider therapy but was afraid of it. It seemed like a desperate measure. A last-ditch effort. But with these guys any reticence or prejudices I had against therapy instantly vanished. Two hundred percent of myself sounded like a miracle. I would go to therapy.

I wanted clarity. I wanted progress. I wanted to be free of the leaden mold infesting my chest. I wanted the careless existence of being a 23-year old I had been anticipating.

The arduous process of finding a therapist was something I wasn’t prepared for. Sitting in Rockefeller Plaza on my lunch break I would leave voicemails for therapists hoping one of them would be what I needed. Can you help me? Can you help me?

By the time I finally walked into a therapist’s office for the first time I was already starting to feel better. As though admitting I needed help was enough to start the process of healing for me. It still took some time to get to a point where my relationship was no longer something I thought about on a daily basis. Eventually, I moved on.

Though, in my 20s I certainly didn’t get better at breaking up and handling the emotions that followed. Saying goodbye still meant mourning. It meant sadness and sorrow and sitting with those feelings, in them. As pleasant as sitting in a tepid kiddie pool that’s warm for exactly the wrong reason.

Related: 7 Important Things You Must Know About Healing after A Divorce Or Breakup

Mourning from breaking up

Movies had led me to believe getting over relationships would be a string of drunken nights with friends and random hookups with strangers bearing the same emotional dents. It was not the case for me. My mourning involved a lot of solo activities.

Sneaking into a double feature at a Times Square movie theater in the middle of a weekday to separate myself from the world. Reading books on the floor of the Barnes and Noble in my neighborhood. Eating dinner at the same restaurant twice during a single weekend. Feeling semi-embarrassed when the same server helped me but didn’t seem to recognize my presence.

It meant forgetting how to have a conversation with a pretty girl. Being verbally paralyzed when people asked me how I was doing. Not wanting to lie but not wanting to throw a pity party I would stumble through an explanation of my current state, appearing more confused than anything else.

Transitioning out of love, lust, or even companionship has always made me rethink at least parts of my life. I realize now how important those breakups were, both in helping me understand who I was and informed how I would behave in future relationships.

It is a strange thing to emerge from a long relationship feeling less put together than when you went in. I remember the months after my last breakup. They were cautious and strange. Wanting to feel better but also hesitant to fully admit I was clear of the emotional fallout if even trace amounts remained.

In one of those cautious and strange moments, while having dinner with a close friend, our talk turned to the countries she wanted to visit. Germany came up. I mentioned my desire to attend Oktoberfest. We discussed logistics in our excitement. Two weeks later we booked our tickets. Three months later we left.

I had been deliberate and patient with myself. I had processed my relationship and the breakup. I had sat with it for long enough, and I was finally ready to let go of the experience. I wanted a return of the spirit I had since lost.

The two weeks we spent away felt energizing and refreshing. It was an escape and ceremony and a restarting of my life. I returned home feeling energized. Like myself again. It wasn’t the trip itself that changed things as much as the timing of it and everything that came before.

Breaking up shapes who you are

When a relationship ends, my want is to feel better immediately, as I imagine it is for most people. To erase any trace of the person so as to avoid any unwelcome reminder. To arrive at a place of equanimity. In those moments I have no desire to appreciate the wonderful memories of someone I loved but am no longer with.

Read How To Manage Feeling Depressed After A Breakup

I certainly wasn’t able to view those tumultuous times as important or formative. I did not appreciate how they shaped me into who I was, how I would be less emotionally competent or mature without them. I shudder to think how romantically toxic I would be without such heartache.

I am still learning from those experiences today. I do not think back on those relationships and long for them. They are incredible teachers that have given me more than I expected. While I will never seek out heartache, I am so very grateful for my experience with it.

It has made me a better person, and hopefully, a better partner.