20 Signs Of A Toxic Mother 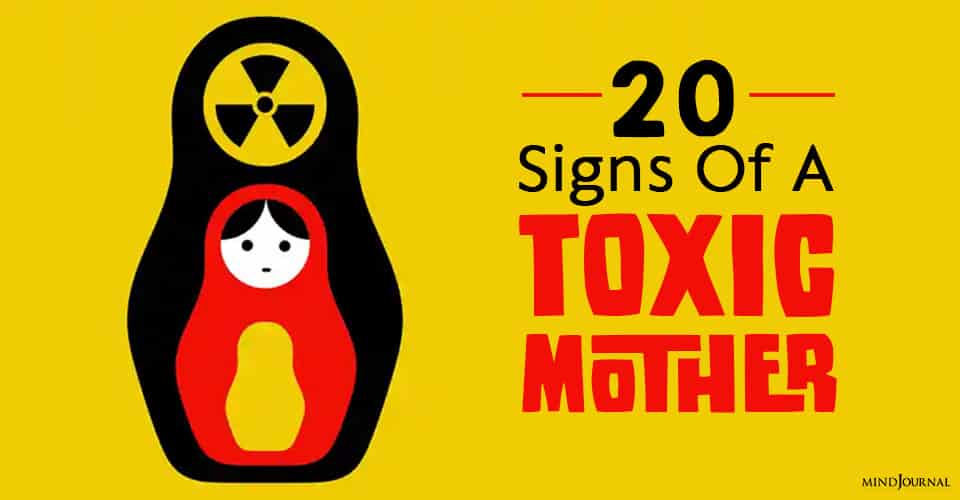 A mother-child bond is exceptional. The emotional attachment you have with your mother is different from that which you have with anyone else. However, feeling that way about someone leaves you vulnerable. It leaves you easily susceptible to emotional damage upon mistreatment and for the traumatizing behavior demonstrated by her, especially if she is a toxic mother.

All families come with baggage. Most of them involve some form of manipulation. And in most cases, these are harmless. Unfortunately, in some cases, they cross a certain line and delve into the toxic category. Purposefully or not, these behaviors can cause immense amounts of emotional damage in a child, the scars of which remain a lifetime and in some cases, the damage was done irredeemably.

The act of manipulation

Manipulation is the act or a series of acts one takes in an attempt to control someone else. It could range from them wanting you to give up your time, resources, personal possessions, power, or anything else. Recognizing manipulation can be difficult, especially when coming from your mother. It might take a long time before you realize or accept the truth. No matter what your age is, you can identify if you are or have been manipulated by your mother.

Related: 10 Signs You Have A Toxic Mother-In-Law and How To Deal

20 Signs Of A Toxic Mother

We all have a right to share how we feel. We all want to be heard. But if it so happens that your mother often interrupts you, does not give you a fair chance to speak, does not value your concerns, or reprimands you for emoting, and tells you how you ‘should’ feel, then there is a problem.

Trying to counsel a child to see things differently, in a positive way, is fine. But complete dismissal of negative emotions experienced by him or her may lead to severe depression while growing up and it becomes difficult for them to handle negative situations later in life as an adult.

Calling you names in public, shaming or mocking you, blaming you when things go wrong, insulting you, or criticizing you harshly to make you feel inferior, threatening, or intimidating you are a regular part of your relationship with her.

A toxic mother might, after saying such things, try to rationalize the abuse by claiming it to be ‘tough love’ or ‘for your own good’. The mockery and the public shaming might come disguised as a friendly ‘jab’ or a ‘joke’.

Does your mother shut you off every time you stand up to her to let her know about her actions and talks and how they impact you? This is a typical manipulative tactic, and a classic sign of having a toxic mother. If you point so much as your little finger at her, she will immediately burst out and start victimizing herself by saying things like, “Oh God! What did I ever do to deserve this?”

Self-victimization is attuned with the act of denying all allegations against her. She refuses to even reflect on such thoughts and just straight-up denies that any of it is her fault, and you can do yourself a favor and forget about getting an apology from her. Upon confrontation, she will not only call you too sensitive or dramatic, but she will seek support from other people to make her case, and she often succeeds because the others haven’t seen the other side of her.

However, she may find our weak spots and use them to her advantage. This makes it not just wrong, but hypocritical.

Related: 13 Signs Of A Toxic Parent