Top 10 Things That Weaken An Empath 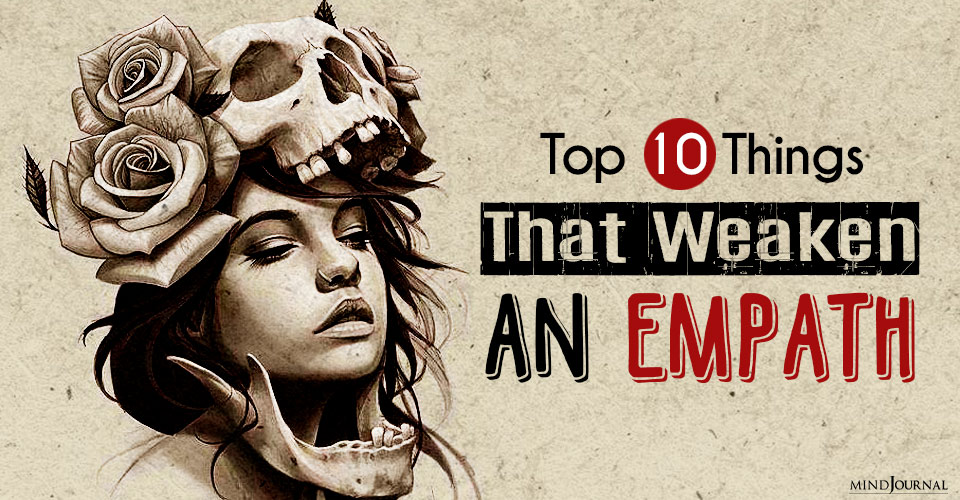 Being an empath, you are prone to absorbing other people’s feelings. Empaths have the ability to pick up the emotions of others which sometimes can be negative too. This can take a toll on your emotional well-being. While being an empath can be extremely rewarding, absorbing those negative energies can weaken you to the extent of feeling completely drained.

I am about to share some things that weaken Empath, either by inducing high levels of emotional or physical stress or by weakening the body.

Now, before you think this post is going to be all doom and gloom it’s not. It’s for a purpose. It’s a way of highlighting how tough times develop us in unusual ways.

We all experience difficulties in life, it’s part of the journey, but it helps to have an understanding of why they happen and where they can take us. So here we go.

The top ten things that weaken an Empath…

Science has acknowledged that just spending too much time around constantly disapproving or miserable people can impact health and happiness. Meaning: we become sick just by hanging out with negative people.

Backed by studies that show how prolonged people stress alters gene expression within the immune system, more and more doctors are recommending their patients to avoid spending time with negative people to safeguard their health.

For an Empath, who both lifts and experiences the dark emotions or intentions of others, they are worst affected than most by negative people. They soon come to understand that it is best to avoid them.

We live in a society that promotes narcissism and narcissistic things that weaken empaths. You only have to look online or on social media outlets to see evidence of this. But the type of narcissist that weakens an Empath the most is the type who likes to control and manipulate.

An Empath carries the type of ‘light’ that might be considered as a weakness or something that can be controlled. This light often makes them a target of manipulative people and puts them in the firing line of narcissists.

That said, even when an Empath avoids contact with them, they can still get caught up in ‘the narcissist’s web.’ Which can cause various emotional and physical problems for an Empath.

If an Empath’s chakras are unbalanced it means they will not handle being around people for any length of time. It also means they are open to developing a number of health complaints.

The chakras are weakened by personal trauma, anxiety, stress, EMFs, modern lifestyles, and unsuitable diets. If any of the chakras are forced open, by any of the above, it can result in physical ailments and a diminished or permeable aura.

A vulnerable aura is bad news for anyone but is especially debilitating to an Empath. The condition not only drains physical energy but also allows the energy of others to have the worst impact.

Related: Which of Your Chakra Is Out Of Balance? – Psychology Test

Electromagnetic frequencies (EMFs), created from wireless technologies, disrupt energy frequencies within the body and energy field. They affect the chakras and endocrine glands, immune system, and nervous system. In fact, the symptoms of ‘EMF overload’ are similar to those an Empath might experience from being ungrounded.

Sadly, the escapism of EMF and WIFI is virtually impossible. Yet there are some simple things we can do to help protect ourselves.

Foods that have been refined, genetically altered, contain artificial flavorings, preservatives, etc., not only weaken the body but also the mind. They trigger amygdala activation (responsible for activating heightened emotions), ignite autoimmune conditions, depression, and more.

Consuming animal products, where the animals greatly suffered, might also trigger depression within an Empath.

Related: 10+ Immunity Boosting Foods You Should Have More Often

Low vibrational food, such as the above, has a negative impact on all humans, but for an Empath, who often has a ‘hot amygdala’ the impact tends to be experienced far worse.