Are You Under A Psychic Attack? Symptoms and Ways To Protect 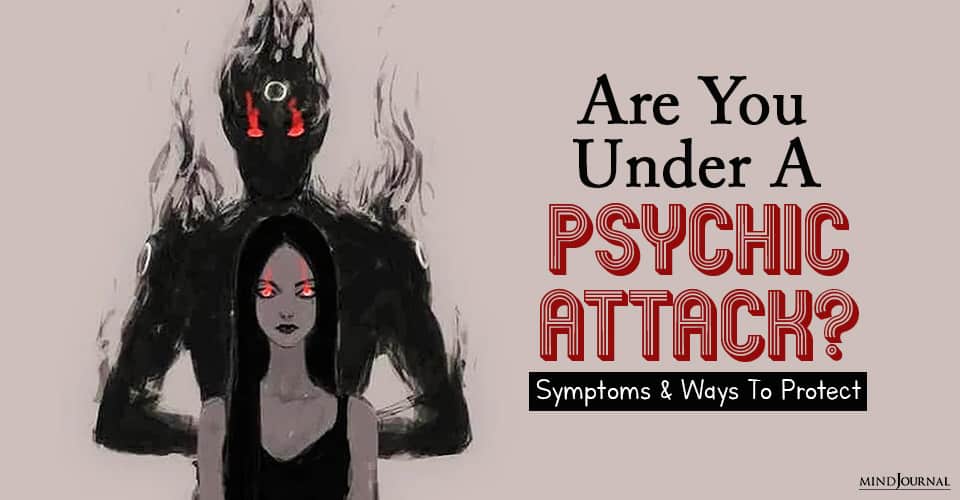 A psychic attack is when an individual is under the influence of negative energies. These negative forces are mainly influenced by the form of thought or your surroundings. Are You Under Psychic Attack? In this article, we will talk about ways to protect yourself from a Psychic Attack.

You’re exhausted, but you can’t sleep & you feel exhausted all the time.
You have a recurring fever or cold which doesn’t seem to go away.
You’re having mood swings, a lot of them which isn’t normal for you.
You are depressed even while life seems overall good.
What’s going on?

These can be taken as symptoms of overwork or psychological issues or even stress, but from the standpoint of energy medicine, you’re under psychic attack.

Related: 7 Untold Signs That You May Have Psychic Abilities (Are You A Psychic)

We meet people all the time, our neighbors, colleagues, friends, friends of friends, relatives, family, and the psychic cords are always formed through one or more of them, which may be unconscious or deliberate.

Each one of us is made of light & dark, and if somebody focuses on their jealousy and ill-will towards you and you have a karmic bond with them then their thoughts & feelings will definitely harm you.

This is why it becomes so-so important to acknowledge our shadow side as it works itself out and becomes a strong source of light, power, and strength in our personality. But till the time we’re addressing it, it’ll always create difficulties.

A guy had got an admission into a prestigious university which no one from his family had ever had the privilege to join. After a few months, he started having a lack of sleep and it will go on for days. This bought down his performance and class attendance and his results were affected.

The cause of his problem was obvious, he had a strong jealous cord attached to him from one of his family members. This person was so jealous that this boys’ thoughts & feelings have taken a strong form of fear-psychosis.

I gave him a powerful ritual with the right mantra which helped him to heal the cord within a week, and he kept working with the ritual which helped him cut the new cords too. Don’t ever think that “this is all too fantastic” just because your physical eyes can’t see it and you haven’t developed your 3rd Eye.

Related: Ways The Best Psychic Readings Can Help You In Your Relationships

Then there are deliberate attacks that are doubly harmful because people creating these attacks know how to really harm others, in ways and means which can be fatalistic. I had gone through this and people will hate you for nothing, but just being here in this world.

This is so bad, that it’ll block you from your true self. This is a big loss. So, don’t think that the psychic attack is easy, it’s bad, really bad.

And if you are an empath, Coach, a reader/guide, a consultant, a healer then you work with people very closely and this too causes unconscious psychic attacks which are mostly based on neediness and putting you up on a pedestal.

Related: Layers of The Empath Gift: 10 Levels of Empath Evolution

So, your clients really start seeing you consciously/subconsciously as someone who will help them. These cords are attached mostly to your back Solar Plexus and back head or 3rd Eye. And they too suck your energy out which is like a hose pipe transferring water from the upper level to the droughted area.

Most of the time the people who unconsciously attack you don’t know what they are doing but then it doesn’t mean that this lessens the karma created. They still have to repay it. And for people who are creating deliberate attacks and harming others which then comes in the category of Black Magic, their karma is multifold, which may make them totally crazy or mad in this lifetime or the next, many a time the consequences are even more severe.

Symptoms of a Psychic Attack:

I have already listed some of the most common symptoms, some others being,

Related: 8 Ways Your Fear and Insecurity Is Sabotaging Your Relationship

So, the question is, “How to protect oneself at all times, even in sleep?”

There are certain ways in which we can distance ourselves from these attacks, like the ones listed here below, but know that it’s not enough. The cords need to be cut every day and your energy protected which is why it’s important you have a tool handy that you use.

Know that the most important first step is to not – judge the other person nor yourself, or fearing that these attacks have real power over you, or they are that you have to counter-attack or destroy.

Why? Because then you’re lending your own energy, focus, and power, which will make them far stronger than they actually were!!!!

5 Ways to protect yourself from a Psychic Attack

1. Work with your Shadow-Self

Whenever there’s an attack that affects you, it’s kind of an indication from the Universe and your Angels to start working on that side of you that got triggered due to this attack, or that which attracted this.

Analyze well, and don’t ever think, “oh I must be very vulnerable which is why I’m affected”, “It’s because I smile too much or I seem happy that people are doing this”, or to this effect. What is important isn’t about “why”, what is important is all about “What”. What is the darkness in me that is Attracting them to me, is the right step towards freedom from these attacks forever.

When you know something “bad”, your subconscious will completely and totally become obsessed with thinking about it. Whatever you do, however much you try, your thought-gates will be opened and these compulsive obsessive thoughts will start lining around.

The best way to deal with it is to come back to your center with the knowing that “fear” will only increase the effects on you. Don’t get angry, don’t be frustrated with your fear-based thoughts, just treat them as a child, with care & love and keep re-directing them to your core, the center of your being, knowing that nothing is going to harm you ever, as when you’ve centered your Angels have more power to protect you.

Acceptance is the key to your inner strength. When we refuse to accept things, our shadow-side, our subconscious starts to have a field day. They will keep throwing on your thoughts and emotions that will create confusion and chaos and you’ll constantly feel miserable, victimized, which isn’t the right way to be.

Related: The Best Way To Cultivate Contentment And Inner Peace In Yourself

Accept that you’re affected by energies that are creating difficulties or want to create chaos in your life. Accept you’re experiencing something which doesn’t seem to help you but directly but it will soon. Then seek help from your Higher-Self, your Angels.

5. Work with Archangels & your Higher-Self

I have given a practice that involves Archangel Michael for protection & shielding, but you can work with the legion of Archangels like AA Zadkiel, Jophile, and Christie. To help you with your shadow-side. These attacks aren’t just there to create discomfort in your life but they are triggering your pain-body to help you realize what is your hidden self like and to show you the reason to outgrow it and heal it.

Related: The 12 Archangels and their Connection With The Zodiac Signs

Working with your Infinite Self also helps you see the bigger picture so that there is more forgiveness and your heart is open to let the energies flow. With better flow, the effects become minimal.

And as I have said earlier, don’t ever play the blame game with yourself or directing it to others. Animosity, feelings of revenge, and hatred tend to increase the potency of the harmful energies. Remember nothing can happen without the consent of the Supreme and this too is important to your life experience to help you grow into that which you have a Soul-Contract for.

These attacks will forever cease to affect you once you reach that state which the Divine wants you to reach.

2 thoughts on “Are You Under A Psychic Attack? Symptoms and Ways To Protect”