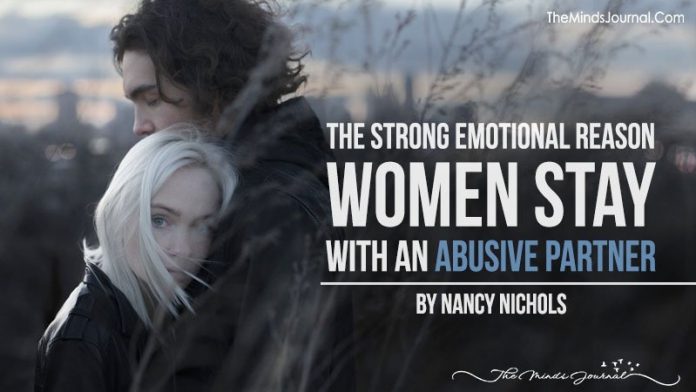 The STRONG Emotional Reason Women Stay With An Abusive Partner

Your partner verbally and physically abuses you but you can’t find the courage to leave him.

He manipulates, controls, degrades and berates you. You suppress your hurt feelings. You even make excuses for his reprehensible, hurtful behavior.

He promises repeatedly to quit drinking, to get counseling for his anger issues and to stop verbally and physically battering you. Instead, he blindsides you with a cutting remark or rages at you for no clear reason.

You know in your heart that your relationship is a lost cause, and yet you stay with a man who is slowly destroying you.

Girl, where is your sense of survival?

What relationship could possibly be worth the horrific conflict, mental mutilation, bruises and busted lips from the hands of a punishing, irate boyfriend or husband?

Why does a woman stay with a man who mistreats her so badly?

There are compelling reasons why women stay in a relationship with an abusive partner:

Bonding with the enemy.

Seduction, deception, and betrayal are core components of the abusive relationship.

You fell in love with the most wonderful man you’ve ever known. He adored you. He understood you. He showered you with attention, affection, and gifts. He got into your head, your heart, and your bed.

You were overwhelmed by the love you felt for him. You allowed him into your life because you trusted him. And then he began to criticize, control and demean you and the cycle of abuse begins.

Your partner’s demeanor changes, suddenly or gradually. Once he was loving, considerate and patient, now he ridicules you, unjustly blames and condemns you and erupts in unprovoked, uncontrollable anger. His behavior is punishing, demoralizing and menacing. It’s as if he enjoys the anguish and tears he causes you.

After each abusive event, he apologizes profusely for his cruel behavior and the “battering phase” ends. He appears contrite. He is quasi-agreeable, considerate and attentive. He may agree to quit drinking or go to counseling.

In spite of his volatile, harmful behavior, you are grateful for his change of heart and you are optimistic that his remorse is genuine—so you forgive him, you have makeup sex and you enter the “calm-loving-respite phase.”

Having forgiven him, you are doubly-emotionally invested in the relationship.

Inevitably, he begins to batter you again and you are drawn deeper into the traumatic bonding experience.

Your emotional suffering is profound. You are conflicted by the intense love-hate-regret-sorrow-fearful feelings you have for your boyfriend or husband. One minute you despise him and you want him out of your life permanently and the next morning you can’t live without him.