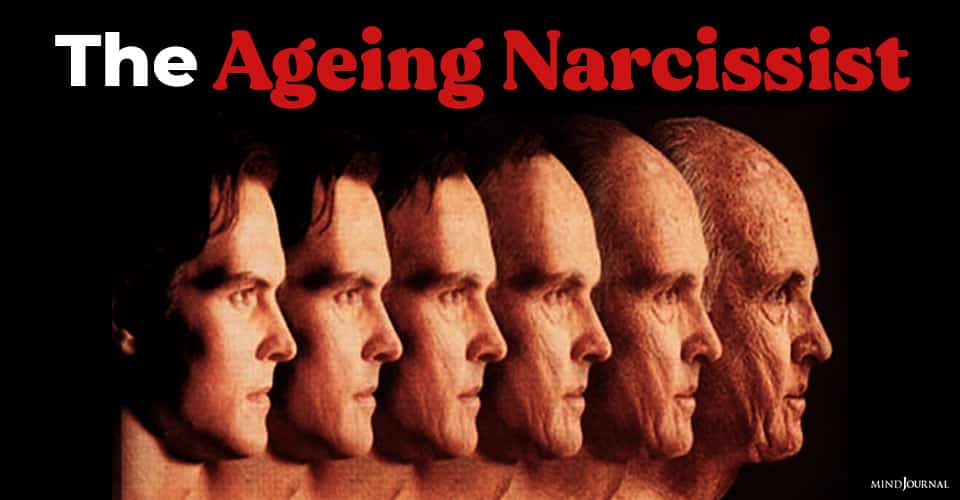 When a narcissist starts ageing, people eventually see through the false charm and see the person for who they really are.

Slowly but surely, the narcissist’s social circle dwindles away, one by one people disappear, no longer finding their behavior acceptable. Most people who have crossed their path in one way or another have borne witness to their deceit and toxicity.

Towards the end of their lives, there is often not one single living soul who cares whether they live or die. By the time the final curtain falls, they receive what I call poetic justice, getting back what they gave out to others all their lives. As they take their last breath, there’s not a hand to hold, everyone who once cared is long gone.

Call it Karma, call it God having the final say, call it what you will… I call it payback.

Ageing is a process that none of us look forward to, but it is better than the alternative. Most of us try to age with grace and dignity, having gained wisdom through the years.

A narcissist’s behaviour tends to get worse with the passage of time. As time takes its toll on their looks and their health they know that admiration is a thing of the past. Time has taken its toll on their withered frame. An ageing narcissist can no longer rely on his outward appearance to attract new supply.

Read Why Narcissists Ruin the Holidays

They glare at the image staring back at them from the mirror failing to accept the ageing face before them. Their mind is not as sharp as it once was. What have they left to look forward to? Retirement? Obscurity? Insignificance?

We are always told to look on the inside, look at how someone treats others, look at their heart and look at their soul. It’s the inside that counts. What’s on the inside of a narcissist? Absolutely nothing but an empty shell. As the years roll by the narcissist faces a complete loss of supply and lashes out at anyone unfortunate enough to be within earshot.

WHEN THE NARCISSIST IS LEFT ALONE

I have a strong belief that people who treat others poorly and have no empathy or compassion for others will be shown no compassion in later life. They have spent their entire lives abusing, betraying and demeaning others, aware of what they do, and without a second thought for the pain that they inflict time and time again. Friends and ex-partners have become enemies.

If their children haven’t already become strangers, the ageing narcissist may try to buy their children’s love in a feeble attempt to keep them close, believing that they may be the only people left on this earth who will put up with their pernicious behaviour.

Read 12 Weird Things You Might See A Narcissist Do.

These meagre efforts to be seen as a good parent may be welcomed by a child who has spent a lifetime seeking mum or dad’s approval. For others, it will be too little too late.

‘An ironic twist of fate…
Their enemy will be their memories.
They can never undo what they’ve done.
They can’t escape their thoughts
When they find themselves alone,
Unloved and abandoned.
When their evil has been uncovered,
The truth will pursue them,
Wherever they go.’

The narcissist is an immature, angry, volatile and controlling individual. They spend their lives attempting to form relationships. Sadly, it’s not a partnership they are seeking but a dictatorship where they have all the power and control. Eventually, people get sick and tired of their behaviour and abandon them.

A string of failed relationships adds to their already fragile ego. By bringing about their own abandonment as a result of their abusive and despicable behaviour, they inflict upon themselves a deep narcissistic injury.

Somehow, the narcissist will delude themselves into believing that their own self-destruction is someone else’s fault.

Much like a drug addict without their supply, the narcissist can’t cope when supplies become scarce and run out. They become chronically depressed and angry and find no pleasure in anything. Their noxious behaviour becomes more demanding and worse by the day.

Things that they used to enjoy no longer hold their interest. Their world has become hostile, their social life is non-existent. No one wants to be in their company for any length of time. They often become a hermit, closed off from the outside world, blaming everyone else for the situation that they find themselves in. The longer the lack of supply continues, the worse their insecurities and paranoia become.

The ageing narcissist clings desperately to nothing, resenting the passage of time yet helpless to prevent it. They may create fake profiles on social media to stalk people, people that they may never meet or talk to. Surfing the Internet may give them the opportunity to get a little attention from someone, from anyone. They’ve lost faith in themselves. They don’t like themselves and nobody else likes them either, so they think, ‘There’s no point in being nice.’

Narcissists have an enormous fear of their own mortality. As death approaches, they know that complete oblivion is on the horizon. Life gives back to them exactly what they deserve, loneliness and isolation. They find themselves being shunned and ignored. The one thing that they never could control is time. As they move forward to eternity they have the knowledge that there is a final judgment, and this time, it’s not them.

Read The 7 Things Narcissists Are Most Afraid Of

THE NARCISSIST AND ILLNESS

People will say that when they have become ill, the narcissist didn’t want to know. They were not interested and basically didn’t care. They saw it as your problem, so get on with it. So what happens when a narcissist gets sick? They will milk it for as long as they can. They will take all the sympathy and concern that they can muster, and then some.

They will see their illness as a reason to demand your attention 24/7. Cast any plans you may have aside. Your focus must be on them until they are better. After you have nursed them back to health, taken them to the doctor, collected their medications and tended to their every need, don’t expect them to show you how grateful they are for your tender loving care. They aren’t. It was your duty after all. You could have done more.

There are times when an ageing narcissist will fake illness, fake a heart attack, fake cancer, in fact. fake anything, just to focus attention on themselves. They may do so when you are ill, go one better than you with an illness much worse than yours in order that they get the attention that should be focused on you.

THE NARCISSIST ON THEIR DEATHBED

I am often asked if a narcissist will change when they are on their deathbed. Will they want to put things right and apologize to all those they have hurt in their lifetime? Some people want closure and expect a change of heart from the narcissist as they take their last breath. A deathbed apology is extremely unlikely. They are likely to die the same way that they have lived, hurting others. Many will use this time to twist the knife in just one more time.

Don’t beat yourself up if you decide not to pay them one last visit. It is a matter of looking after yourself, a matter of self-protection. There is no point in opening old wounds to satisfy the demands of someone who inflicted those wounds in the first place. If they wanted your company, they should have shown remorse before this late stage, and they should have acted better.

Pity them for being the person they are if you must, but please be careful to never give them the chance to hurt you again.

5 thoughts on “The Ageing Narcissist”

11 Crazy-Making Behaviors Of A Covert Narcissist

Someone commented on one of my videos a while back, saying that she learned about covert narcissism by literally Googling the term crazymaking behavior. That sounded like a perfect description of what it’s like to be with a covert narcissist.

That comment also made me incredibly grateful that there are so many resources available on this topic today that someone could Google crazy-making behavior and discover that they’re in a relationship with a covert narcissist.

I hope you’re ready to hear about the eleven crazy-making behaviors that are incredibly common with the covert narcissist because that’s exactly what we’re going to cover.

Truth About Silent Treatment: Why Won’t He Say What Is Wrong?

Something is wrong. The fact that something is wrong has many manifestations in the narcissistic dynamic. You may experience a sudden eruption of temper, the instigation of a silent treatment as you follow us around the house trying to draw from us what on earth is the matter.

It might be that you plead with us to explain as all we do is fix you with a malevolent glare and say nothing. It may escalate into you being accused of various transgressions which make no sense and certainly cannot be what is truly wrong since the allegations have no bearing in fact.

Did it take years before you suspected that someone in your life might be a covert narcissist? If so, don’t feel bad. That’s common because of the nature of the personality disorder and its covert nature of it.

Covert means hidden - and if you’ve known a covert narcissist - you probably have noticed that a lot of these negative characteristics are often very hidden until you get to know them. Today, we’re going to cover 24 warning signs that you might be dealing with a covert narcissist.

Today, we’re taking a step back and we’re looking at the signs that someone might be a covert narcissist. And why is this important?

If you’re in a relationship with someone who is a covert narcissist, that person cannot easily change, and we can’t change them. So you might end up in a situation where