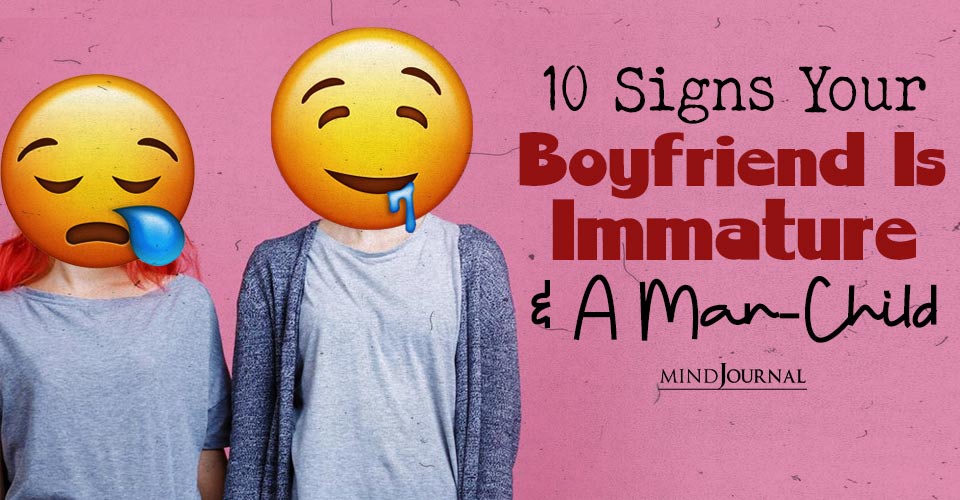 Realizing your boyfriend is immature months or even years after dating him can often come as a shock and make you wonder:

“How could I have been so blind?”

“Am I really dating an idiot?”

“How did he survive so long without me?”

“What was I even thinking?”

Related: 12 Things He Will Do For You If He Truly Loves You

Well, you weren’t thinking because you were in love. And love makes us all a little stupid. Sure dating a smart and intelligent man has its perks, like having deep, stimulating conversations, but having an idiot boyfriend who is genuine, caring and sweet isn’t that bad either.

What really matters is if your boyfriend has the traits and qualities you seek in a romantic partner and what they are willing to do to make up for their immature and idiotic behavior.

But is your boyfriend really an idiot? Is he actually that immature? Let’s find out.

10 Signs your boyfriend is immature

Not sure if you are dating a man-child? Here are some of the most common signs of an immature boyfriend who is also an idiot –

1. He doesn’t take responsibility for his life

Smart people know how important it is to take responsibility for your own life. Immature men, however, tend to have a victim mentality and avoid taking responsibility. As a result, they are emotionally trapped in anxiety, unhappiness and misery.

They have trouble overcoming challenges and experience more failures than successes. This is one of the most basic man-child signs to look out for.

2. He doesn’t plan about the future

While being mindful and living in the present moment is a commendable trait, inability to prepare for the future is pure idiocy. Immature man-children don’t think ahead much other than wondering what’s for dinner.

They don’t have any goals or a vision for their future nor do they strategize how they will prosper professionally and personally in the coming few years. So if your boyfriend is unclear about what his future holds for him, then your boyfriend is immature.

Related: 8 Ways A Guy Acts Around You When He Likes You And What It Means

3. He is messy and sloppy

This one goes hand in hand with his inability to take responsibility. He is a careless, inattentive and thoughtless individual who never cleans his own mess. He throws his clothes and “stuff” around the house and never picks up after himself. And in the end, it all comes down to you to clean all his mess for him.

Even though this is exhausting, you end up rationalizing his behavior. An immature man-child will always shift the responsibility of adulthood to people who put up with is idiotic behavior.

What’s worse, he even makes up silly stories when picking up the tab while on a date with you, such as he forgot his wallet or his credit card is not working. And once again, all the financial burden will once again fall on you – to pay off his debts, to pay the monthly bills and the checks on your dates.

While a woman should financially support her partner when needed, you should not be an ATM in the relationship.

Related: How to Get Your Boyfriend to Chase You Again

5. He uses the wrong words

Does he say “bearchested” when he means “barechested”? Does he confuse “they’re” with “their”? Or does he say “accept” when he wants to mean “except”? Yup, you’ve got an idiot in your hands.

Your boyfriend is immature and an idiot if he has a poor vocabulary. While using simple words when communicating may be a sign of intelligence, having a limited vocabulary or not knowing what to say and when to say it is a sign of low intelligence. Using too much slang or saying “stuff” repeatedly to explain most things are red flags too.

6. He is too impulsive and spontaneous

While being impulsive can be fun at times, acting without planning and being recklessly spontaneous all the time is a sure sign of immaturity. When your boyfriend is immature, he is incapable of analyzing or understanding what the consequences of his actions can be.

While being impulsive may be an attractive trait in a teenage boy, it is not something we want to see in a responsible mature man. When someone is impulsive, they end up doing stupid “stuff” frequently, like cheating on you with another girl or spending too much money without thinking. As you can figure, this can spell doom for your relationship.

Do you feel like talking to a wall every time you interact with him? Is he inattentive and gets easily distracted when you speak? If your relationship lacks depth in communication, then sadly, your boyfriend is immature.

An idiotic and immature man-child will have trouble actively listening to his partner even when he wants to. As his mind becomes overloaded with new information, he will start to “zone out” because his thoughts will start to wander.

Related: 5 Things To Do When Your Boyfriend Keeps Breaking Promises

8. He is incapable of meaningful conversations

It makes sense since he is not really a good listener and zones out rapidly. And this is the reason why he tends to avoid conversations on serious or deep topics. Due to his immaturity, he may simply be unable to deal with serious issues and so he makes the tone of the conversation lighter by changing the topic or making silly jokes.

However, when forced to have a serious confrontation, the man-child may become defensive and blame you instead or simply ignore you. While it doesn’t necessarily mean that your boyfriend is toxic or narcissistic, it does mean that he lacks the maturity and responsibility to hold a serious conversation and pay attention to what you are saying. This is definitely one of the signs your boyfriend is immature.

9. He is afraid of commitment

While there may be various reasons why someone may be afraid of commitment, such as adverse childhood experiences, toxic relationships in the past or an actual phobia of commitment (I am not making this up, Google ‘gamophobia’), an immature man-child will likely panic and run away whenever you bring up the topic of marriage or your future together.

Yes, we are all afraid of ending up with the wrong person. All those stories of failed marriages and divorces make us petrified when thinking about getting married. Granted relationship anxiety can make it difficult to make such crucial decisions. But when he avoids talking about marriage, kids, home or even pets, even after being together for years, then your boyfriend is immature and downright an idiot.

Honestly and openly talking to him about this can help you resolve this issue, only if you can get him to listen and have this conversation.

10. He is gullible and easily influenced

Is your boyfriend a naïve man who is easily deceived, tricked and influenced by others? When you are dating an immature man-child, you will find your partner easily falling for scams repeatedly. As he doesn’t think rationally or logically and behaves impulsively and spontaneously, he trusts others easily and willingly. So he is quickly influenced by everyone and anyone.

Related: 5 Things To Do If Your Boyfriend ‘Forgot’ Valentine’s Day

Immature and idiotic men lack a strong personality which makes them vulnerable to manipulation and scams. They are unable to identify scammers and become prey to toxic manipulations every time. Even when he is not falling for scammers, he will become influenced by celebrities and try to dress and act like them.

So if he seems a little too obsessed with certain celebrities, then it might mean that your boyfriend is immature.

Are you looking for more signs you are dating an idiot?

Still wondering how to know you are dating an immature guy? Here are some more signs your boyfriend is immature –

He lacks self-awareness and never learns from his mistakes

He is not very curious about things, uninterested in learning new things and willingly stays ignorant

He unknowingly tends to mansplain everything to you

He acts like a teenager when he is around his friends

Can you identify these signs in your boyfriend? Are you telling yourself “my boyfriend is immature”? Well, it’s not necessarily a bad thing.

Granted your boyfriend is immature, but that doesn’t mean he is not a caring individual who loves you a lot. While some of us do feel attracted to intelligence, I believe trust, respect, loyalty, empathy, understanding and kindness are more important for a successful and lasting relationship.

Yes, being with an immature man-child can be annoying, but by being empathic and kind with your partner you can help him become more self-aware and mature eventually.

So don’t lose hope just yet. Identifying the signs your boyfriend is immature is the first step to building a better relationship. Be supportive and help him become more emotionally intelligent if you see a future with him.

After all, love is more important than being smart. Or is it?

Related: 11 Reasons Why Trust Is More Important Than Love In A Relationship