How to Get Your Boyfriend to Chase You Again 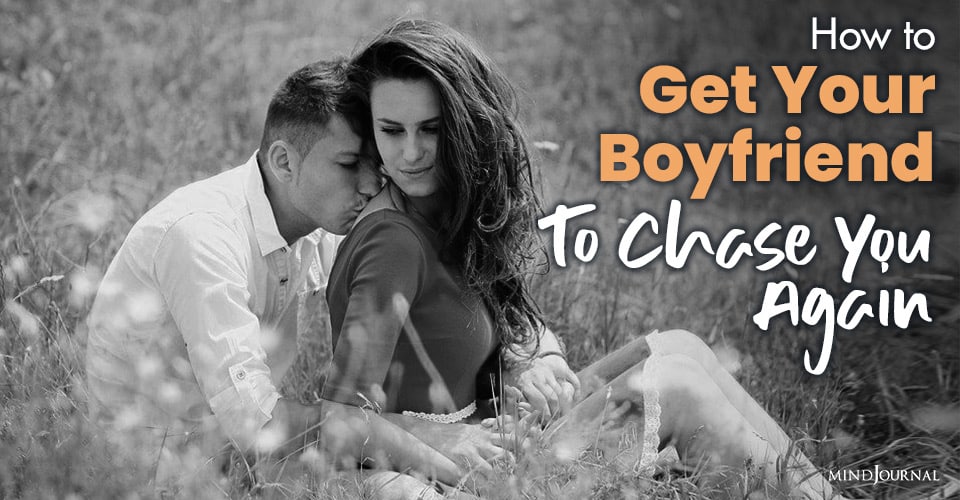 A reader emailed me asking my thoughts on an article she had found online on getting your man to chase you again. I told her never to read anything like that again.

There is so much shit on the internet telling you what you want to hear—to get you to buy the product—that in reality is setting you up for utter disaster. Let’s tackle this topic appropriately, shall we?

The Shit You’re Being Told

You’re in the dumps because your man doesn’t leave roses on your doorstep anymore, the trance he used to fall into every time he looked at you over dinner is long gone, and his body no longer quivers in anticipation when you undress.

The truth is, he’s fallen victim to the comforts of routine; now that he has you, he doesn’t have to work for you anymore. So you feel like a beaten up old rag as you watch him gawk at the unattainable blonde across the room. You look online for support and you find the following:

“He’s gotten lazy because you’ve let him. If you don’t keep him on his toes, he’s going to feed into his evolutionary instinct and go hunt somewhere else. You can TRAIN him! Set some ground rules early in the game. It’s time to transform yourself into the person you KNOW he’ll chase for the rest of his life!”

The following list of tips was taken directly for the article sent to me.

For god’s sake. Are you kidding me?

Make rules, even if he doesn’t like them? Find his weak spots and use them when need be? Threaten to dump him occasionally? It’s like a list of really bad rules to a game.

Here’s the thing: this kind of shit will sound so appealing to you in a time of desperation. You’ll find it right when you feel your relationship is slipping through your fingers and you’ll ignore every bit of common sense pointing you in the opposite direction. You will cave, and you will become a slave to a superficial 12 step program.

If you think relationships are as simple as ‘get him to do the laundry’ you aren’t worthy of even being on my website. Sign off and good luck.