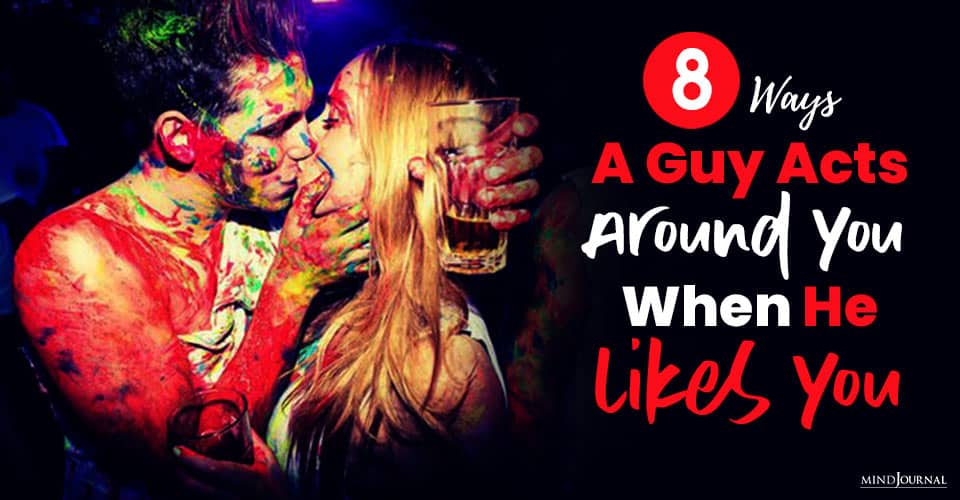 When a guy likes you, he acts differently with you, if you notice. Some of the antics might seem funny, some sweet, and some downright disturbing. But the good news is, you will be able to understand which guy genuinely likes you and wants to be with you, and which guy is simply just showing off.

As women, most times we do not understand why men behave the way they do. It becomes even more confusing for us when the said man has been bitten by the love bug. When smitten, guys tend to turn into such cryptic creatures that their behaviors stop matching with what they actually have going on inside their heads. Often times, they will end up doing such things which end up doing more harm than good.

At one point or the other, you might have witnessed these signs and aptly been turned off or amused or disgusted by a number of them.

Sure, these are all signs telling you that the guy you have blubbering in front of you is probably attracted to you, but not all of these are telling signs for you to base your decision on.

Your choice of dating a man lies with you and only you. We are here only to understand what makes a potential date act a certain way and what it might mean for you.

1. He just talks about himself.

This kind of guy wants you to be impressed by him. Because he thinks he is extremely impressive — and he lets everyone in the vicinity know of this by publicizing himself. A nervous guy will be aware that he is on a word-vomit and he will listen to you when you speak. A self-righteous pompous dude will not let you talk.

If you do, you will immediately be able to tell that he is only pretending to listen to you but all the while thinking of new things to tell about himself, his job, or his enormously expensive adventures. This is the type of person who won’t spare you any thought if it means less time for himself, and the not-so-expert advice on this guy is: pass.

Contrary to the previous one, he is the guy who is so nervous that he just shuts up. It is possible that you are witnessing an introvert out of his comfort zone. In which case, you might have to be the one who steers the conversation and also possibly end up feeling like he is not interested in you — when it might be otherwise.

Dating an introvert comes with its own challenges and benefits, some of which you might get to try out first hand on this awkwardly one-sided seeming date.

We touched upon this briefly in #1 to provide perspective. A guy in a nervous-rambling mode might not be trying to paint himself the king of the world, but he might be just so nervous that he is afraid of the awkward-silences and hence, decides to keep them away.

This type of conversation might be salvaged if you can both calm down and relax. Of course, it might get a little tough if he starts arguing with his own points and in turn with himself, but there is nothing a good meal and some wine cannot solve right?

Or in other words, he tries to out-macho everyone in his vicinity. Boy, do we not know this one? He will flick his hair and give pointless, smoldering eyes that are just plain embarrassing for you. He will shit a brick trying to flex his muscles and then overdo it if heavens forbid you don’t utter consistent approvals.

He will talk down at you, mansplain everything under the sun and he will try imitating the melodramatic, dominant, alpha males of the daily soaps who are nothing but entitled, self-centered and for some reason, even with their Howard-worthy English-speaking skills, they do not seem to have learned the meaning of the word NO.

Also, don’t forget about the classic ‘I like you, so I will insult you, make you feel worthless, and then expect you to still come crawling after me, seeking my approval’. Delusional much?

Again, the not-so-expert opinion on this: really? Just keep passing.

Related: 3 Tips for Finding the Perfect Partner for You

Honesty is good. But one has to pick what exactly to be honest about. At least on the first date. A guy acts nervous when he likes you and is attracted to you. And this can turn a guy insecure about himself and in trying to sell himself to you, he might end up highlighting all his negative points. It is okay if the harsh truths are insignificant to you like he was a bed-wetter until he turned ten or that he had braces.

But then it could also be things like his ex dumped him because he was lazy to plan dates or all his female friends have friend-zoned him because of whatever reasons. Well, you better be taking notes on this one and because female friends and scorned ex-es can tell you a lot about a guy — and do you really want someone whom a majority of his female acquaintances have rejected? You know they must all have had a good reason.

6. He indirectly disses you.

Because dissing you directly comes with consequences. You know those guys who sound like they are complimenting you but you are pretty sure you feel insulted anyway. Like for example, he might tell you your dress hides your love handles really well or that your haircut hides your age efficiently. Well, no. That’s called negging and yes, it is a really insensitive thing to subject on anyone.

And then there is the one who tries to prove that you are dumb. Everything you do is wrong in some way, uncultured or ‘a very common misconception that most people make’. You could be the blazing inventor of the toaster (yeah, roll with me for a sec), but he would still tell you the way you make or prefer your toasts are the ‘wrong’ way and he will go on to explain why exactly you are so dumb to have this preference and how blessed you are that you finally have the toast-genius to tell you, the toaster-inventor, how it is actually done.

7. You are either babysitting …

You know, in case, he goes full meltdown and you are left running an impromptu emotional ER facility? I have only heard stories of this happening. (Not that I am one of those introverts who doesn’t go out much and gets all her stories from her incredibly juicy sources.)

8. …Or wish that you were actually babysitting instead.

Because that would have let you teach the next generation of males to keep their private parts to themselves on their first dates. This is another of those species that we all have encountered — even if we weren’t necessarily on a date with them. He will unsolicitedly talk about his dick, the numerous sexual escapades ‘he and mini-he’ have had, and how many women he has been with.

Well, we know he is trying to impress, but does he really think we want to get on this list of people he has banged that he apparently goes around telling anyone who is unfortunate enough to have been stuck in a conversation with him?

The (Not So) Expert conclusion to this?

Guys are not divided into such clean halves — totally nervous or totally arrogant. There are seasoned candidates that hide their flaws well, just like there are genuinely nice guys who are at ease and just out to have a good time. In any case, you have to practice Constant Vigilance and decide for yourself smartly which guy acts how when he likes you or is faking it and take your time in judging a guy for yourself. After all, you know yourself the best.