5 Things To Do If Your Boyfriend ‘Forgot’ Valentine’s Day 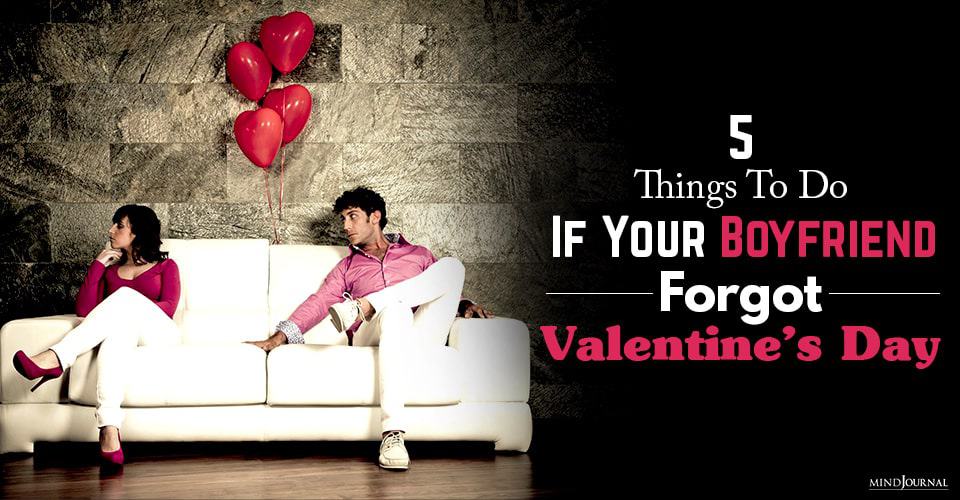 February 14 is the most romantic of days and, in spite of its importance, your boyfriend forgot Valentine’s day, didn’t he?

Instead of waking you up to chocolate or flowers or words of affirmation or a nice brunch out, did your boyfriend jump out of bed, kiss you quickly and head out for a run, returning with bagels and a paper and not a word about what day it was?

Are you left feeling angry and hurt by his lack of recognition, the fact that he (perhaps once again) forgot Valentine’s day, making you question your self-worth and whether he truly loves you?

‘What?’ you say, ‘How can I not take it personally? If he loved me, he would have made an effort to do something for me.’

I know it sounds logical and simple, and for many women it is. But for many men, expressions of affection, whether with words or gifts, are akin to speaking Greek. Something they would love to do but something that seems overwhelming and daunting. And so, instead of owning it, they ignore it.

I have a client whose boyfriend got her NOTHING for Valentine’s Day. Nothing. She was devastated. She didn’t know what had happened and it made her feel bad about herself and wondering how much he cared about her. She came to learn, down the road, that he was so overcome with anxiety about what to do that he did nothing.

While she still didn’t like that he did nothing, understanding that it was more about his insecurities then about his feelings for her helped her manage her disappointment.

Related: 20+ Romantic Movies For Valentine’s Day That Will Give You All The Feels

In a healthy relationship, people who are hurt by their loved ones have a responsibility to tell their person that they have been hurt. It’s important to let them know that they have let you down. If you act like it’s no big deal, two things will happen. The first is that you will continue to stew, to continue to be hurt and confused. The second is that next Valentine’s Day (or your birthday or Christmas) your guy might not do anything for you once again.

I mean, if you are cool with him not doing something for you, why would he make an effort to do it?

3. Don’t compare yourself to everyone else.

I know that it’s very hard not to compare yourself to everyone and what they are doing/getting for Valentine’s Day.

Every year, people on social media inundate us with pictures and stories of their most amazing Valentine’s Days, coordinated with thoughtfulness and skill by their most amazing boyfriends. Pictures of fancy dinners and island destinations and engagement rings are everywhere.

And, yes, some guys are good at remembering and following through on Valentine’s Day. (I am betting that, somewhere along the way, some girl didn’t sulk and act cool but told those guys the truth – that they sucked at Valentine’s Day.)

That being said, there are millions of other women out in the world who are celebrating Valentine’s Day with a card or a kind word or nothing at all.  You are not alone.  You are not the most pathetic person in the world. You are just another woman in the world, trying to make the best of life and love.

Instead of looking at what that woman got from her man, go out and get yourself something. Want some chocolate? Go get some. Some perfume or jewelry or flowers? Get some. Who needs to wait for some guy to get us something? We can take care of ourselves, take control of our emotions and not let anyone suck us down.

4. Do recognize that it’s not the end of the world.

I know that February 14 feels very much like Valentine’s Day for the whole day. All-day we see signs in stores, talking about love, posts online, text from friends, chocolate-filled hearts aplenty. It’s everywhere and, when your boyfriend forgets Valentine’s Day, the day is horrible.

That being said, don’t forget that the day after Valentine’s Day is just another day. Another day when life goes on. Chocolate heart candy will go on sale, to be replaced with chocolate bunnies. Just another day.

Ask yourself how your boyfriend treats you on those regular days. Does he buy you flowers or open the car door for you or take you out to dinner or rub your feet or hang out with your friends or walk the dog or make the bed or ask about your day? Does he do a million little things on those days that aren’t Valentine’s Day, things that might make up for the fact that he dropped the ball this one day? Things that show that he loves you truly?

Your boyfriend forgetting Valentine’s Day definitely sucks but life and love can, and will, go on, nonetheless.

Of course, taking stock of all of the things that I said above is important but it is also VERY important that you not blindly accept what has happened on Valentine’s Day, act like everything is cool, and assure yourself that this guy really loves you and that he just dropped the ball.

It is possible that your boyfriend forgot Valentine’s Day because he just isn’t that into you. It could be that he isn’t the romantic type and that, no matter what you say, he will contend that Valentine’s Day is ridiculous and that he will never take part in it. He could just not care about your feelings either way and not be nice to you, ever.

So, take a look at the overall picture of your relationship. Does your guy treat you well when it’s not Valentine’s Day? Is he the kind of romantic that you need him to be? Do you have any questions in the back of your mind that your relationship might be doomed in the long run?

There can be many reasons why your boyfriend forgot Valentine’s Day and one of them might just be because your relationship isn’t healthy and that it might be near it’s end.

I know the idea sucks, and I am sorry, but it just might be the case. Be honest with yourself. Is it?

Your boyfriend forgot Valentine’s Day and it has left you feeling angry and bereft. I totally get it.

One year my boyfriend (now ex-husband) forgot about Valentine’s Day and got me some on-sale roses the next day. It felt shitty, to say the least.

But that didn’t mean he didn’t care about me – he just was working hard and missed the day. I told him it hurt and the next year he went out of his way and kicked ass, making it the most special day ever!

I know that some of my friends had very romantic days with their guys but really, my guy and I hung out and went to the movies which was, in its own way, romantic because it’s one of my favorite things to do.

And, the next day, like it is every year, was February 15th and life went on.

All of that being said, make sure that you take a good hard look at your relationship. Have you been making it something that it’s not? Do you want to be in a relationship with someone who will never be romantic? Do you have any doubts?

It just might be that your boyfriend forgetting Valentine’s Day might be just the wake-up call you need to get up, move on and find the love you want!

If you have made this far you must really be hurt after your boyfriend forgot Valentine’s Day.

Let me help you, NOW, before the pain gets worse.

Email me at mitzi@letyourdreamsbegin.com, or click here, and let’s get started.