20 Things A True Gentleman Does Differently 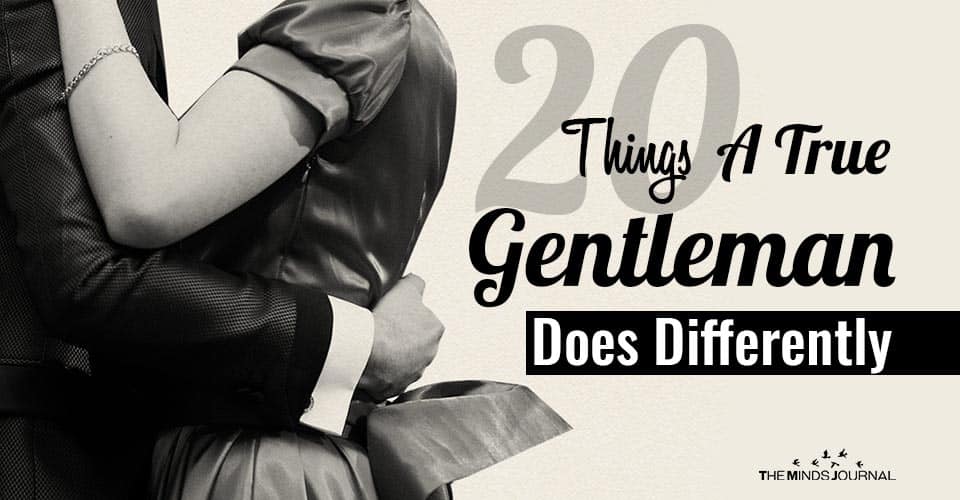 How do you know if your man is a true gentleman?

Here are 20 ways in which a true gentleman conducts himself differently.

Related: 10 Actions That A True Gentleman Never Resorts To

A gentleman is always on time as he values his time as well as that of others. He is present everywhere right on time, just as he promises. It indicates how courteous he is and that he respects others as a proper gentleman does.

3. Is always closer to the Curb

While walking on the footpath he always walks closest to the curb and puts himself between any possible danger and the woman he is with.

4. Covers the lady with his Jacket

When it’s chilly and the woman with this man feels cold, a true gentleman offers her his jacket, sacrificing his own comfort.

A true gentleman would never take his seat first. In the presence of a woman, he would pull out the chair and offer the seat to her and then gently move it closer, helping her to sit. He will always ensure to make the woman comfortable and then take the seat himself.

We are taught to say “please” and “thank you” to others, but most people forget this tiny bit of courteousness by the time they grow up. A gentleman never forgets to be courteous and that is why he always wins the heart of others.

A true gentleman is never weary of sacrificing his comforts for the sake of others especially when it comes to the elderly and women. Whether it is a park or a subway, a bus, or a train, if he finds a woman or an elderly person standing, he offers them his seat.

Related: 12 Signs You Have Found A True Gentleman

When he is out with a woman on a date, he makes her feel special by offering is arm to her. It really speaks volumes of his refined manners. Women too like him because they love walking arm-in-arm with a true gentleman.

He is well aware of how to eat in a BBQ joint as well as a restaurant. He knows very well, he can use his fingers to eat the food in a BBQ joint and it does not matter if he gets a bit messy. But when in a restaurant, he knows the silverware is not provided without a reason. He will make a point to use the napkin and use the spoons and forks correctly for different types of dishes.

10. Is never rude to others

Howling, shouting and insulting others, sparing no thought for them, is not the way of a gentleman. He will always show restraint and be in control of his emotions. He tries to show empathy towards others and never misses to show basic respect to them.

A true gentleman always reaches or the bill, and insists on paying it. However, when for some reason he does not pick up the bill first, he at least offers to pay the bill before allowing the other person. But, when he picks up the bill and makes the payment, whether he’s with a woman on a date or with a friend, he does not expect anything from them.

Watch this video to know how to be a gentleman:

You can expect to have his complete attention when you are talking to him. He would make eye contact with you as you speak or discuss something with him. A man, who fiddles with his phone, looks away, watches TV, or indulges in any other activity while you speak to him, is rude and self-centered. He is anything but a gentleman.
Not only does he listen to others, but he will also not forget to compliment others when they are dressed or a particular station. This is true, especially, when he is with women. He knows what makes a woman smile and feels special, and he doesn’t hesitate to do his bit.

When a gentleman gives you his word for something, you can be sure he will do it. Whether it is a meeting or a date or something he promised you to provide help with.

A gentleman is not a blabbermouth. He speaks carefully and also knows how to keep the secrets of others.

15. Doesn’t discuss his woman with others

A true gentleman honors and respects his woman. His bedroom secrets are his own and he never discusses how his woman looks naked, or how she’s in the bed.

16. Is never violent with Women

He is never violent with a woman. A gentleman by nature is a protector of women. He would never hit anybody of the opposite sex, unless and until, they try to kill or injure someone innocent.

This is basic courtesy, but not many people follow. A true gentleman starts eating only after everyone has been served.

Related:10 Things A Good Guy Won’t Ever Do To The Woman He Loves

He would never shy away from telling the truth. He maintains his honor by speaking truth in all circumstances and is a man of trust.

When with such a man, you will know that he has not spent his years idly.  He is a man who doesn’t want others first around him or expects others to do all the work. He will always lend a helping hand to do household chores. He knows how to cook, change a baby’s diaper, fix a car or change an electric fuse. He has learned things and that makes life around him so easy.

Related: If Your Guy Does These 16 Things, Congrats! You Found A Real Man

20. Comes to the rescue of Defenseless

To be true, the ancient knight in such men is still alive. They are in their hearts to the warriors who would own band was in the face of dangers to protect the helpless. Courage, fearlessness, and strength are the very identities of gentlemen. He stands up when he finds the women, children, and the innocent in jeopardy, and battles for the sake of others exposing himself to risk.

Are you a true gentleman? If you could relate to the article, let me know in comments.