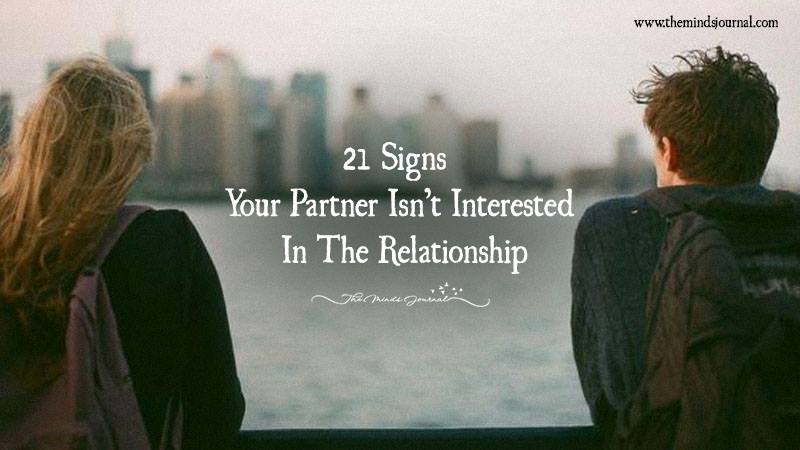 Relationships are based on mutual harmony and understanding and it will tend to fall apart as soon as anyone of the two partners starts drifting apart due to some reason.

The gradual changes will definitely show up in a relationship and the other person can clearly from any of the following signs know that his or her partner is no more interested in continuing the relationship.

1. When there is no time for a partner and the excuse of being busy starts coming up frequently during the course of conversation, then this can definitely indicate sheer indifference due to lack of interest because no matter whatever happens, if two people truly love each other, they both will always find out some quality time with one another.

2. When anyone of the partner is only around you for some personal interest and is ignoring at all other times, then this can also mean a sign of losing interest in the relationship. The selfish nature cannot hide even in the cover of ignorance.

3. There is very less or rather no communication between the two people in the relationship as one is hardly interested in talking.

4. There is no scope of listening but only babbling about one’s own life, clearly indicates that the oneness between the two souls has lost.

5. There is scarcely any move from the other person to know about the day or life about his or her partner.

6. Another extremely detrimental trait is the over-controlling behavior as one partner may be imposing enough,although he can ignore his or her partner at other times. Nothing can be more abusive than this sort of misbehavior.

7. If anyone is no more inclined towards the relationship, then he or she will always keep on blaming the other person for no fault of his or her.

8. Due to extreme negativity, the person on the receiving end also changes and that shows in the form of depression, lethargy and a weary feeling about the relationship.

9. There is no more inclusion of the partner in the concerned person’s life because he or she has already separated himself or herself from the relationship.

10. There is hardly respect left for the other person or rather the partner in the relationship.

11. The person keeps on disregarding the values of his or her partner without being least considerate about the feelings and emotions of the person at the receiving end.

12. When the bond becomes fragile due to the lack of interest from one side, then a load of excuses and hollow apologies keeps piling up that hardly carry any weight or significance in the relationship.

13. The person is least bothered about the well-being of the partner whereas actually, if a person truly feels for the other one, then the partner always comes first and consequently, his or her priority is always higher than even self-priority sometimes.

14. The three main pillars of symptoms that are striking for such persons who are no more interested in continuing the relationship are ignoring the partner, disrespecting the inner circle of the partner or even avoiding the partner deliberately.

15. There is hardly any meaning left in their apologies of wrong doings and it increases to such an extent that at one point in time, the apologies even sound fake and empty.

16. There is a hairline difference between hearing and listening. When a person belongs to a relationship, he or she listens with interest and for the other case, there is only hearing with no mind towards the partner’s words. Hence, the incidences of forgetting also keep on escalating.

17. Having sex may be a pretty commonplace thing but the actual intimacy will definitely be missing during the course of making love sessions if any one person has lost the interest and consequently, the charm in a relationship loosens.

18. The person is not ready to commit for a long term and only speaks about dating or planning for some short term outings or the like. This is a sign that the person cannot be trusted anymore and can very easily break away from the bonds that the other person might have held onto so much dearly.

26 Things You Need To Make Your Relationship Last

The best relationships have certain attributes that set them apart from others and make them more likely to last and develop into a deep, loving connection.
Read more
Romantic Relationship

Are you dealing with a past trauma that's negatively affecting your current relationship?
Read more