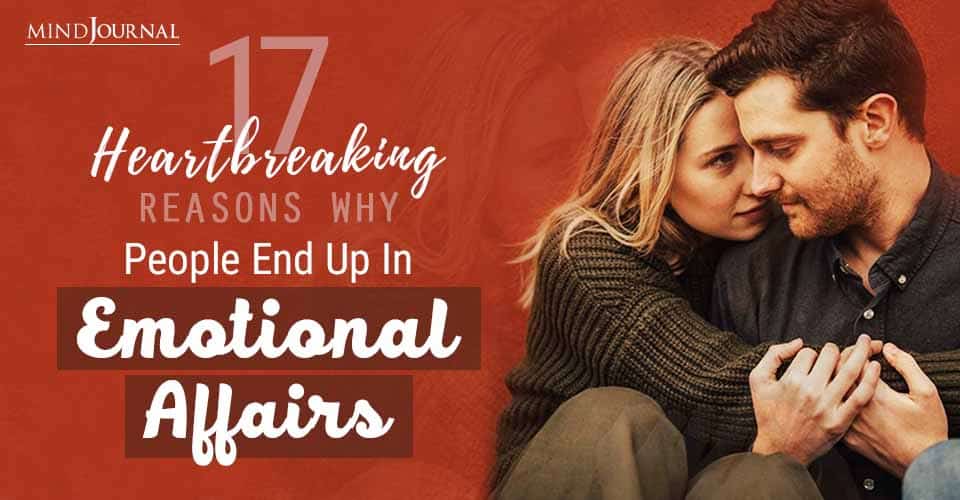 Why do emotional affairs happen?

It happens way more than you think.

According to the American Association of Marriage and Family Therapy, about 35 percent of wives and 45 percent of husbands report having emotional affairs, while 22 percent of men and 13 percent of women — both married and unmarried — have cheated in their lifetimes.

We could say that these figures are conservative because of course, not everyone admits that their partner cheated or that they themselves betrayed their partner.

An emotional affair signifies that a partner has really checked out of the marriage. The level of secrecy and denial about it causes more pain than if their partner simply told the truth about cheating.

It signifies a conscious, deliberate intent to deceive — this is at the heart of the betrayal.

In a survey, 88 percent of women said they care more about emotional infidelity than physical infidelity. That’s two times higher than men when asked the same question.

So, knowing the pain it causes, why do so many people go there?

Here are 17 heartbreaking reasons why people stray and end up in an emotional affair.

1. They’re narcissistic and have an endless need for validation.

It’s like they’re constantly searching for the next hit, the next reassurance that they’re OK.

They can’t seem to overcome the pull of wanting someone to stroke their ego endlessly. They’re insecure about so much and have low self-esteem.

It’s easier seeking validation from others than confronting the painful feelings of inadequacy that haunt them.

Related: What Men Really Think Should Count As ‘Emotional Infidelity’

2. They struggle with impulse control.

Signs of this come up through overindulging in “pleasures” like alcohol, food, and gambling.

Emotional affairs are another sign of this incapacity to self-regulate the reward center of their brain by taking too much of a good thing.

Even seemingly harmless flirting and friendships go too far, and then emotional cheaters start their inevitable coverup.

3. They believe they deserve this pleasure.

They justify it to themselves, saying, “It can’t really hurt. We all have desires that need satisfying.”

This sense of entitlement lets them make peace with their behavior, making up all sorts of stories about how much they need this “friend” or other person in their life, and how harmless it is.

At the heart of it, they’re very convinced of their own “deservedness” and go to extraordinary lengths to justify their emotional affairs.

For example, there’s a direct correlation between the amount of money a spouse makes and their likelihood of having an emotional affair.

Related: 12 Signs You Are Married To A Narcissist

4. They believe they’re essentially good people, and therefore, their behavior is harmless.

They justify their emotional affairs because they think in black and white terms that only physically sexual affairs are wrong.

And since they’re not physically cheating, they lack empathy for their partner’s concern over their emotional inappropriateness. They think their partner is just being paranoid, jealous, insecure, and controlling.

The emotional cheater repeatedly claims they wouldn’t dream of doing “the wrong thing” (a.k.a., having a sexual affair), but they’re in denial about their shadow side.

5. They have problems with boundaries and saying “no.”

They see themselves as being essential to the well-being of another. This is either because they need to “rescue” that person, or because they have a deep need to feel important.

6. They can’t stand the idea of being “controlled” by their partner.

They fail to assert their needs in a healthy way and instead, seek to dominate others. They think they’re resisting being controlled, when in fact they’re being controlling!

By saying they’ll tolerate no limits from their partner, they’re imposing limits of their own on their partner.

Related: Surviving Infidelity Together: 5 Ways Couples Can Move On From The Pain