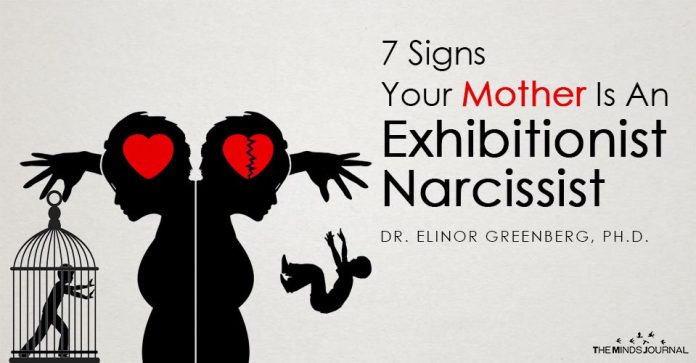 7 Signs Your Mother Is An Exhibitionist Narcissist

Life with Narcissistic Personality Disorder takes you on a roller coaster ride. Your situation aggravates further if you are being brought up by an Exhibitionist Narcissist mother.

Is Your Mother an Exhibitionist Narcissist?

Seven signs that your mother may be an Exhibitionist Narcissist.
By Dr. Elinor Greenberg

When I listen to some of my clients talk about how their mother treats them, I sometimes hear an almost textbook description of the classic Exhibitionist Narcissist.

Usually my clients have no idea that many of their terrible childhood memories and their low self-esteem are probably due to their mother having a Narcissistic Personality Disorder.

What Is a Narcissistic Personality Disorder?

One can think of Narcissistic Personality Disorder as an adaptation to a childhood situation that left the person with unstable self-esteem and low empathy.

These children grow up to be adults who lack what psychologists call “Whole Object Relations.”

This means that they are unable to see themselves and other people in an integrated and stable way as simultaneously having a mix of good and bad and liked and disliked qualities.

Instead, they alternate between love and hatred or idealization and devaluation.

As parents, when the child is making them feel good about themselves, they will have only positive feelings toward the child.

When the child displease them in any way, they will have only negative feelings towards the child.

As their feelings shift, their view of their child shifts as well.

Narcissistic parents also see themselves in this limited and binary way: Either they are special, unique and perfect or they are worthless, defective garbage.

This means that when they feel disappointed, hurt, or angry with their child, they immediately lose touch with all their positive feelings for the child and now see the child as all-bad and deserving of punishment.

A great deal of the child abuse that we read about is due to the lack of “Object Constancy.”

If parents have “Object Constancy,” this helps them manage their angry, punitive impulses.

They can remember while they are angry or disappointed with their child that they still love the child and do not want to cause harm.

The Effect of Parental Narcissism on the Child’s Self-Image

If you are raised by Narcissistic parents, you are unlikely to be able to develop a stable, integrated, and realistic self-image.

This is because we are biologically programmed to develop a great deal of our self-image from how our caregivers treat us.  This is similar to the way we learn to speak whatever language the people around us are speaking.

The Narcissistic parent can only mirror back to the child the distorted and one-sided views of how they see the child—and these views of the child can shift rapidly as the parent’s mood changes.

This influence can be mitigated if there are other loving and stable adults around who see the child in a realistic and positive way.

This can be a non-Narcissistic father, loving grandparents, aunts and uncles, or even close friends of the family.

7 Signs of the Exhibitionist Narcissist Mother

After listening to hundreds of my clients talk to me about their mothers, I realized that those raised by Exhibitionist Narcissist mothers were describing the same seven types of issues over and over again.

If you can relate to the following examples, and these seven issues played a big role in your childhood, this may be a sign that you too were raised by an Exhibitionist Narcissist mother.

I hope that you do not recognize too many of them.

1. She Needs to Be the Center of Attention

Somehow, no matter who is talking or what else is going on, she will always manage to find a way to make it about her.

She may do this gracefully with humor and a funny story or by abruptly interrupting the ongoing conversation and changing the topic to her.

One mother like this visited her daughter in the hospital. Her daughter was recovering from major surgery.

Instead of focusing on her daughter, she began flirting with the doctors and talking to the people visiting the patient in the next bed.

She was shocked when her daughter later told her how hurt and abandoned she had felt.

If your relationship involves the following behaviors, you might love a toxic person.
Read more
Abuse

Even subtle changes in body language and tone can convey a negative message like, “I just don’t want to deal with you right now” or “You’re being ridiculous” or “You’re overreacting.” The result is the invalidation of the other person’s feelings.
Read more
wpDiscuz
0
0
Would love your thoughts, please comment.x
()
x
| Reply