The Sons Of Narcissistic Mothers And The Damage They Endure 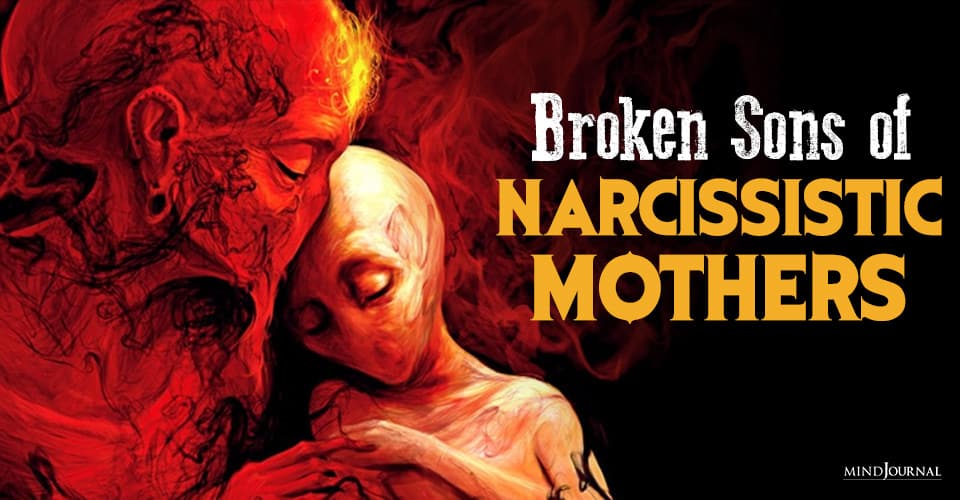 Overcoming pain is always difficult for anyone, especially if it comes from the person you’ve trusted the most. This tends to be more difficult for men as most of them deals with the hardship of expressing their emotions. Maternal narcissist abuse leads the men to struggle for their self-worth and their overall development. Those unhealed emotions cloud their future relationships too.

All children of narcissists suffer. The sons of narcissistic mothers suffer damage to their autonomy, self-worth, and future relationships with women.

Narcissists lack empathy and the ability to nurture their children. They don’t see them as individuals, but only as extensions of themselves. Their children’s feelings and needs are neglected and criticized, while their own take precedence.

Narcissists feel entitled and insist on getting their way. The exact compliance through control, manipulation, guilt, and shame. “It’s their way or the highway,” and if you don’t oblige, they punish you with attacks, coldness, or withholding.

Their insecurity drives their insatiable, unrealistic needs for high regard and admiration. They take offense easily, triggering contempt and rage. Because they lack boundaries, they project and shame and blame others for their own emotional discomfort, which they can’t tolerate.

Dynamics between Sons and Narcissistic Mothers

Narcissism varies in degree and kind and with each individual’s personality and values. There are narcissistic mothers who are disinterested in their children; others who are over-involved. Some act aggressive, while others act caring or seductive.

The following are some common patterns, though your experience may differ.

Narcissistic mothers who feel burdened by motherhood neglect their children, yet shame and criticize them – sometimes for being too needy or childlike. They are needy themselves and can’t bear their child’s needs. They might demand that their young son “be a man,” or favor one child and demonstrably ignore or belittle another.

Instead of neglect, other narcissistic mothers are enmeshed. They use their children for their narcissistic supply. Although a mother may appear independent, she may be emotionally needy and foster mutual dependency with her son through adoring and controlling behavior. She might depend on her son to support her emotionally, listen to her, be a companion, or attend to her physical needs and responsibilities. When he’s an adult, she might rely on him to make decisions and manage her affairs and finances.

Above all, she uses and exploits her son to supply her with attention, admiration, and to fill her wants and needs. She makes him feel loved, important, and valued, reinforcing his dependency. However, it’s only at her pleasure.

Hence, her over-involvement with her son can camouflage her toxic parenting. There’s usually a high price to pay for his attempts at autonomy. Through her manipulation with anger, shame, guilt, self-pity, and/or martyrdom, he learns to put her wishes and needs first and feels obligated to do so.

Many narcissistic mothers idealize their young sons. They build his confidence and sense of importance. As he matures and challenges her control, she disparages his emerging individuality and tries to correct and change him.

To boost her ego, she may brag about her son to her friends, but is critical at home. In response, he may rebel and incur her rage or try to please her to be accepted. His fall from grace can be confusing and traumatic. It’s exacerbated if another child is born. He loses his specialness, and sibling rivalry can be extreme.

Due to her personality disorder, her marital relations lack intimacy. Her husband may avoid her with work. To compensate, and because she’s emotionally needy, she will “triangulate” (bring in a third), be it work, a lover, an addiction, or her children for her narcissistic supply to fill her emptiness.

She may use her son as a confidant or companion. Children are ideal subjects because they idealize their parents and can easily be controlled.

It’s worse for a son if his father is absent, rages are violent, or has a mental or drug problem. Then to survive, the son may seek comfort in addiction or further bond with his mother.