5 Steps To Ignore A Narcissist Who Tries To Hurt You 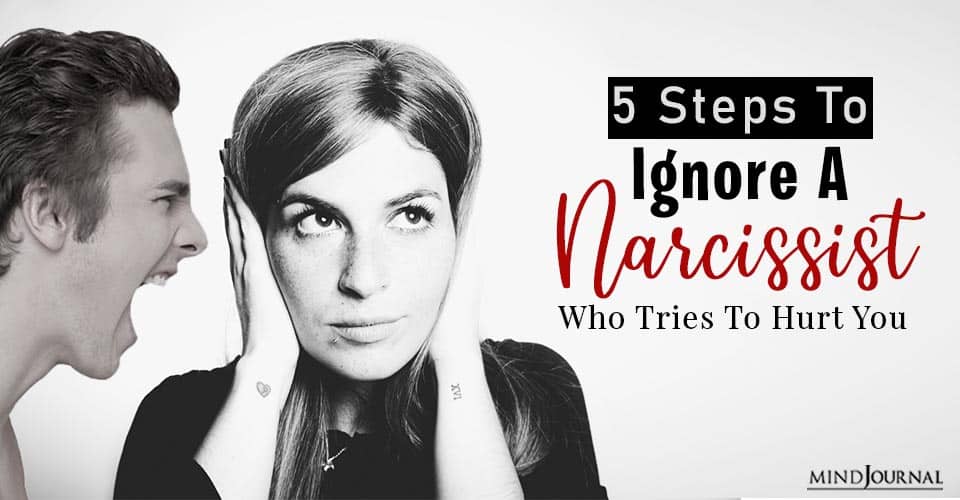 Sometimes the best way to deal with a narcissist is to ignore a narcissist; they will try to punish you and torment you, but with a little bit of effort, you can ignore them for good.

Narcissists love to get your reaction. And as soon as they do, you are handing power away.

This is how narcissists “prosper” – they like to know that they have infiltrated your thoughts, heart, mind, and soul to the point where they are everything to you – front and center, sideways, up and down, and inside and out.

That is what it feels like when a narcissist gets their tentacles into you … like everything you used to think is tipped upside down and turned on its head.

Until we know better we think that combatting a narcissist, when their cruel punishment emerges, can stop the battering – the onslaught of twists, turns, mind-bends, and outright abuse.

In fact, every time we “go in” trying to get some sort of decency, accountability, or sanity, things escalate and we end up even more disorientated, broken, and traumatized than before.

Related: The 7 Things Narcissists Are Most Afraid Of

What is the solution?

It is the VERY thing that is the ONLY solution.

Totally ignoring them, which means granting them no energy, no response, and no bite back.

I discovered that ignoring the narcissist was the most difficult when he was trying to punish me. These were the times when he’d decided I was somehow injuring his False Self and I needed to be throttled back into line. This could amount to not meeting him at the door to greet him adequately. To punish me, he would abandon me and leave.

And … there were the times when he believed I slighted him, causing him to lash out with verbal abuse, name-calling, and intensely derogatory statements about my character. Other times of punishment were when he believed I was involved with other men and would threaten or become physically violent with me.

I could go on and on … as I am sure you also could about the ways the narcissist in your life has punished you.

And for most mere mortals, like me and you, initially it is almost impossible to not react to a narcissist’s cruel and disproportionate behavior when the punishment CLEARLY does not match the supposed crime.

Especially, if you are like me, a high-powered passionate person who has specific beliefs about life and others and how people should treat each other with integrity.

I used to be one of these people who HATED injustice vehemently. For me to sit back and shut my mouth when something was blatantly “wrong’, unfair” or “ridiculous” was like not brushing my teeth in the morning.

It truly was part of my make-up.

So, as far as the narcissist was concerned, my previous self was the perfect target for narcissistic supply – because all he had to do was do something odd/wrong/unjust/cruel/unfair and I’d be all over it.

Before my intense recovery journey, I just thought I was doing the right thing by confronting him. I didn’t realize the repercussions of my intensely co-dependent (sourcing my life from outside of me by trying to force other people to grant me myself) behavior.

What I was doing was defying all rules of Quantum Law – so within, so without.

This is the absolute nature of this Law: whenever we try to change someone else to grant us inner peace and happiness, we are firmly in Wrong Town … and all we get is MORE inner turmoil and unrest in our attempts.