How To Get A Narcissist To Leave You Alone: 8 Smart Ways 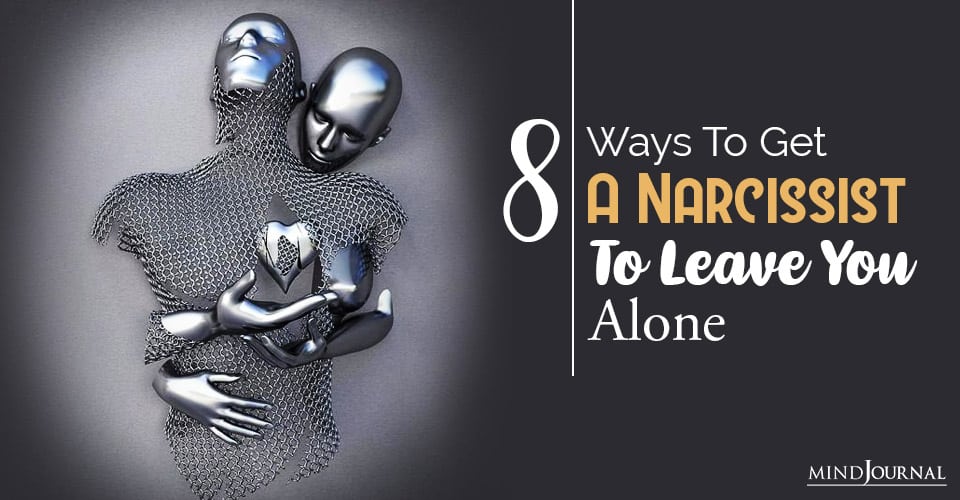 We meet countless people in our lifetime. We end up establishing some sort of relationship with people with whom we associate ourselves. But quite often, we come across narcissists who tend to make our lives more and more toxic with every passing day. But you’re not the only one. A lot of people run into such relations without any prior knowledge. But there’s nothing to worry of course. Follow these easy steps to know exactly how to get a narcissist to leave you alone.

A narcissist can use every type of manipulation to get you to stay; to avoid them, here are 8 effective ways you can get a narcissist to leave you alone!

So What Exactly Is Narcissism?

The word narcissism comes from the ancient Greek “Narcissus” (an individual who fell in love with his own image reflected in the water). It is defined as excessive admiration of one’s self and their attributes. In modern psychology, it is labeled as a mental ailment namely “Narcissistic Personality Disorder”, and it affects many people across the globe. The instability in emotions and body-language brought about this ailment ranges from being mild to consequentially harmful.

What Are The Symptoms Exhibited By A Narcissist?

Narcissists always expect you to do as they desire or instruct. They feel that the world revolves around them and wants them to behave in a certain way. A way that would fulfill their ego or satisfy their false sense of authority. Often, it becomes frustrating to tackle such behavior.

Narcissists tend to believe that the way they perceive the world is absolute. That all other perceptions are flawed and ignorant. They are so unwilling to compromise on their prejudice, that arguments seem like a war to them. They feel offended and often threatened when faced with criticisms.

Almost all narcissists have this particular trait in common. It stems from their lack of empathy and compassion. The absolute nature of their mentality has brought about a sense of doubt and hatred towards people around them.

They pay no attention to your emotional state and don’t care how you feel. They expect you to handle your emotions all by yourself and maintain the desired level of control. They tend to react violently to petty things but expect you to optimize the emotional tension in the relationship.

4. They Take You On A Guilt Trip

Narcissists blame you for everything that goes wrong. Even when it’s clearly their fault, they will point fingers at you, shoving all the burden on your shoulders. As a result, anyone in a relationship with them starts developing a sort of guilt complex.

They begin to doubt their own sense of right and wrong. In the wrong run, it develops into a mental ailment altogether. Even then, the narcissist feels no regret for their actions. The blame game continues, thus leaving you in an emotionally scarred state.

Read: Projection: The Lethal Weapon Narcissists and Abusers Use To Manipulate Others