How To Leave A Narcissist Or Abuser 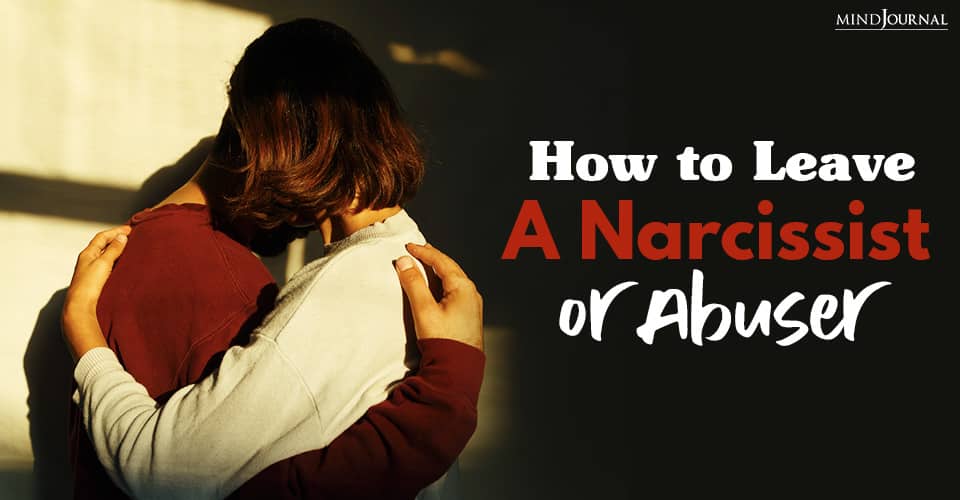 When we fall in love, it’s natural to become attached and form a romantic bond. But once in love with a narcissist, it’s not easy to leave, despite the abuse.

Although you’re unhappy, you may be ambivalent about leaving because you still love your partner, have young children, lack resources, and/or enjoy lifestyle benefits.

Outsiders often question why you stay or urge you to Just leave.

Those words can feel humiliating, because you also think you should. You may want to leave, but feel stuck, and don’t understand why.

This is because there are deeper reasons that keep you bonded unlike in other relationships.

Why it’s Hard to Leave?

Narcissists, especially, can be exceedingly charming, interesting, and enlivening to be around. Initially, they and other abusers may treat you with kindness and warmth, or even love bomb you.

Of course, you want to be with them forever and easily become dependent on their attention and validation. Once you’re hooked and they feel secure, they aren’t motivated to be nice to you.

Their charming traits fade or disappear and are replaced or intermixed with varying degrees of coldness, criticism, demands, and narcissistic abuse.

(See “Narcissus and Echo:  The Heartbreak of Relationships with Narcissists.)

You’re hopeful and accommodating and keep trying to win back their loving attention.

Meanwhile, your self-esteem and independence are undermined daily. You may be gaslighted and begin doubting your own perceptions due to blame and lies. When you object, you’re attacked, intimidated, or confused by manipulation.

Over time, you attempt to avoid conflict and become more deferential. As denial and cognitive dissonance grow, you do and allow things you wouldn’t have imagined when you first met.

Your shame increases as your self-esteem declines. You wonder what happened to the happy, self-respecting, confident person you once were.

Research confirms that it’s common for victims to attach to their abuser, particularly when there’s intermittent positive reinforcement.

You may be trauma-bonded, meaning that after being subjected to prolonged belittling and control, you’ve become childlike and addicted to any sign of approval from your abuser.

This is referred to as Stockholm Syndrome, named for hostages who developed positive feelings for their captors.

You’re especially susceptible to this if the relationship dynamics are repeating a pattern you experienced with a distant, abusive, absent, or withholding parent. The trauma bond with your partner outweighs the negative aspects of the relationship.

Studies show that victims of physical abuse on average don’t leave until after the seventh incident of violence.

They not only fear retaliation, but also the loss of the emotional connection with their partner, which can feel worse than the abuse.

Additionally, codependents, who are usually preyed upon by narcissists and abusers, often feel trapped and find it hard to leave any relationship. They can be loyal to a fault due to their codependency.

Narcissists and abusers are basically codependent. (See “Narcissists are Codependent, too.”) If you distance yourself from them, they do what it takes to pull you back in, because they don’t want to be abandoned.

Narcissists want to keep you interested to feed their ego and supply their needs (“narcissistic supply”). Being left is a major humiliation and blow to their fragile self.

They will attempt to stop you with kindness and charm, blame and guilt-trips, threats and punishment, or neediness, promises, or pleas―whatever it takes to control you so that they win.

If you succeed in leaving, they usually continue their games to exert power over you that compensates for their hidden insecurities.