The 7 Things Narcissists Are Most Afraid Of 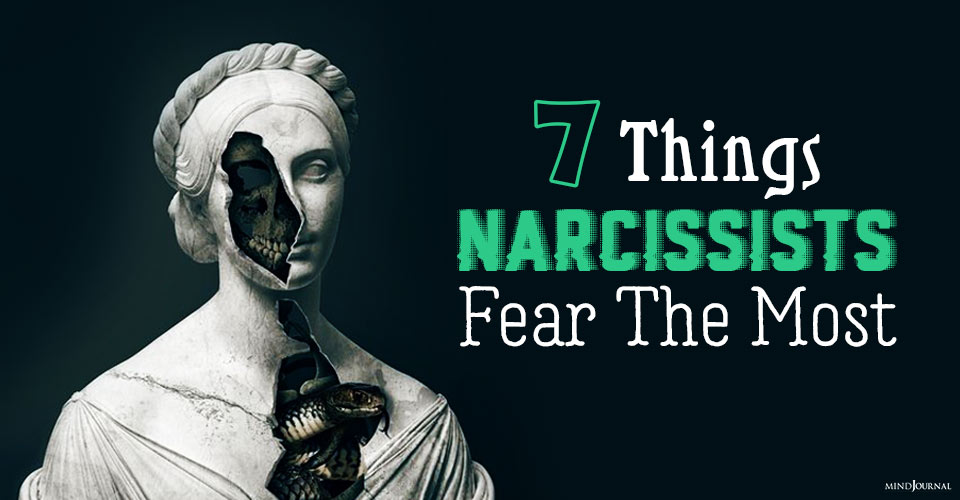 I was actually going to try to post funny search terms again, but alas, they were just not funny, so I nixed that idea.   However, I did find one that inspired me to write this post: What 6 things are narcissists most scared of?

It’s a good question. Are narcissists afraid of anything? You bet they are, and there are 7 things that scare them silly, not just 6.

Related: 5 Steps To Ignore A Narcissist Who Tries To Hurt You

7 Things Narcissists Fear The Most

Narcissists can’t stand being rejected or abandoned. That’s why they fly into rages and punish and threaten you if you threaten to leave them, and love bomb you if you do manage to get away. To reject a narcissist means you are rejecting the false self they have so carefully constructed to impress you.

To reject that false self negates their entire reason for existing since whatever true self they may have left is completely inaccessible to them and the false self cannot survive on its own; it’s completely dependent on the approval and attention of others, who it feeds from like a vampire.

When you reject a narcissist they are forced to confront their own emptiness and nothing scares them more than that. They will fight tooth and nail to avoid it, even if it means they have to destroy you in the process.

Narcissists have no sense of humor. Nada. None. Zero. Zip. They may laugh cruelly at you when you fall and break your arm, and they may chuckle at the discomfort of someone else (since they have almost no empathy), especially if the discomfort was caused by them (because remember, to them you are not a real person but an object), but they are completely incapable of ever laughing at themselves.

A few years ago on a forum, I posted on, there was a man who became enraged when someone wrote “LOL” at a joke someone else made at his expense (the joke wasn’t very offensive), and from then on he gave both of them the silent treatment.

The reason they are so bothered by jokes at their expense and can’t laugh at themselves is that the self they present to the world is a false one that must be propped up and supported at all times by everyone else.

Related: 8 Things A Narcissist Fears The Most

No one likes to be treated with disdain or disrespect, but the narcissist is downright phobic about it.  He or she worries about it all the time and imagines slights and personal attacks even where they don’t exist.

Again, it boils down to the false self which he or she must constantly keep propped up. It’s your job to puff it up and inflate it constantly lest it collapses into a limp pile of flimsy rubber. Disrespecting a narcissist is like popping a hole in their balloon self and they feel like they are going to die.

To avoid this, a narcissist uses every defense mechanism they have in their arsenal–gaslighting, rages, silent treatment, lying, projection, denial, fabricating,  and false affection–to keep you inflating their balloon self so they don’t have to acknowledge the horror of recognizing they have lost their real one.