The 5 Child Roles In Dysfunctional Families 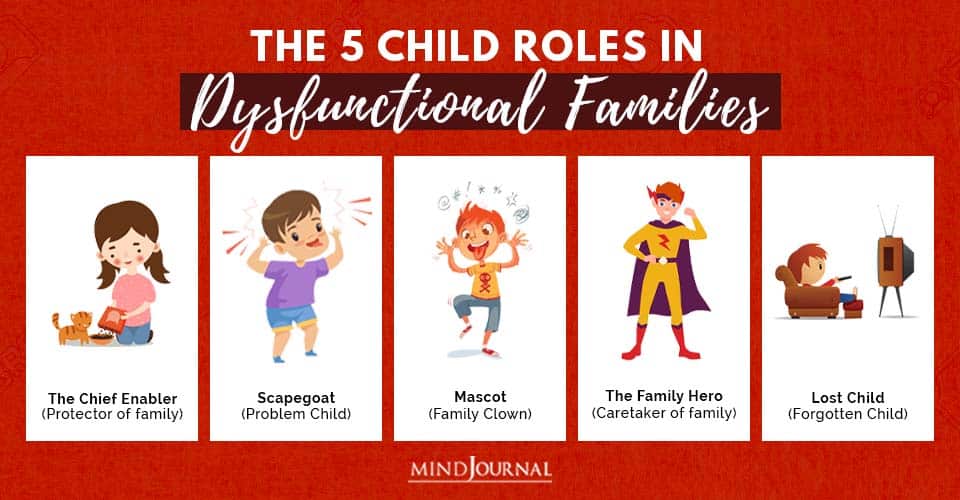 The Cluster B Connection.

Outside of alcoholics and drug addicts, dysfunctional family dynamics are most prevalent when one or both of the partners suffer from a Cluster B disorder, especially Narcissistic Personality Disorder or Malignant Narcissism.

After NPD, BPD is the most common disorder seen in the head of a dysfunctional family, though because it’s more common in women and Borderlines have more empathy than narcissists, BPD is most often seen in the codependent, passive partner.

ASPD (psychopathy or sociopathy) rarely appears by itself in dysfunctional families, as antisocial people and psychopaths tend to not be raising children at all (either because they’re incarcerated, their children have already been removed from the home, or they simply have no interest in raising children,) but a parent could have Malignant Narcissism, which is a combination of NPD and ASPD.

Do you belong to a toxic family? Read Dealing with Toxic Family Members: Narcissistic Abuse Recovery

Also, people with pure ASPD, though more likely to be criminals or involved in illegal activities, tend to be less emotionally abusive than people with NPD or even BPD.

They are merely selfish and lack empathy, and they are manipulative to get what they want, but they don’t care about getting emotional supply from others so they don’t engage in mind games like gaslighting, triangulating, projecting, and scapegoating (unless there is a material reward involved or they are trying to avoid culpability). However, some people with ASPD are sadistic and enjoy tormenting family members for fun.

Of all the Cluster B disorders, HPD is probably the least toxic (Histrionics are shallow, attention-seeking, and dramatic, but not usually that abusive), but HPD is usually comorbid with another Cluster B disorder, such as NPD.

In some cases, a non-Cluster B mental illness (such as Bipolar disorder) that causes abusive acting-out behavior may be the culprit, but it’s less common because most other mental disorders are less easily hidden from others and the person appears “crazier.”

Non-Cluster B disorders are also more easily treated with drugs or therapy, and except for psychotic disorders such as Schizophrenia, the afflicted person knows they have a problem and are more likely to seek help.

Cluster B and addictive disorders.

Parents of dysfunctional families can also be both mentally ill and addicted to drugs or alcohol. The two often go together. In fact, alcoholism and drug addiction are extremely common in people with Cluster B disorders. Alcohol and drugs are their attempt to fill the emptiness they feel inside themselves.

Even if an alcoholic or drug addict doesn’t have an underlying Cluster B disorder, the behavior of an active addict/alcoholic is very similar to someone who has NPD. The only difference in the behavior of a narcissist and someone with active alcoholism is that for the narcissist, the “fix” is emotional; for the alcoholic, it’s chemical.

A non-Cluster B active addict or alcoholic can be every bit as emotionally abusive, self-centered, and manipulative as someone with NPD. Only getting their next fix is important. (As an aside, it’s interesting to me that the 12 steps of AA and other 12-step programs almost all address the problem of narcissism by encouraging humility, responsibility, and amend-making. A person on a so-called “dry drunk” is basically a sober person acting out in narcissistic ways, which may be their nature).

Sometimes only one partner has a mental disorder or addiction, but the non-afflicted parent is always going to be codependent to them. The codependent parent, whether they have a disorder or not, almost always suffers from PTSD or Complex PTSD.