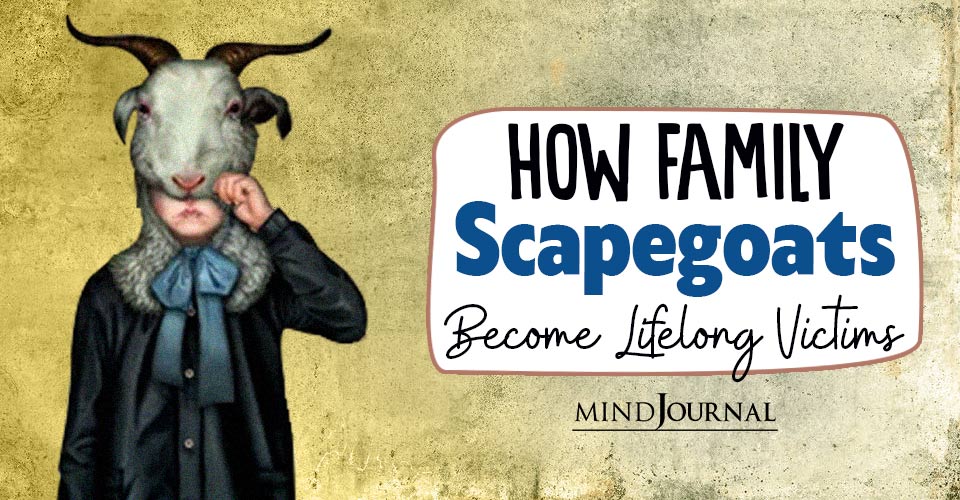 Do you consider yourself one of the many family scapegoats we come across so often in so many families? Does your family always target you, even when it’s clearly not your fault?

If you were scapegoated by your family, two things can happen. You can become a narcissist yourself (narcissism being an elaborate defense mechanism to avoid further hurt and abuse) or you will internalize the early message that you’re worthless, defective, and have no rights.

I’m going to talk about the second scenario because that’s what this video is about and it’s what happened to me.

As a scapegoat, you are trained to live in fear. You become afraid to defend yourself, express your opinions, or demand fair treatment. This attitude of worthlessness, fear, and shame is carried into adult life. Other people can immediately sense you are a pushover and a magnet for abuse, rejection, and bullying, and you become a target for abuse by others well into adult life.

You can become a lifelong victim unless you find a way to break the pattern. It’s difficult to unlearn because it was established so early in life by the narcissistic parent.

Scapegoated children are the family shock absorbers. They are the children who have been assigned to absorb and internalize the narcissistic parents’ rage and to mirror back what has been projected onto them.

This is exactly what happened to me. Although I was an only child I sometimes served the Golden Child role, for the most part, I was the scapegoat. My Aspergers and high sensitivity made me even more perfect for that role.

Today I’m the black sheep and the “loser” of my family. I’m never included in family functions because of my poverty and the fact I’m “different” than the rest of them. Although they disapprove of me, I really became exactly what they needed me to be. My becoming a “loser” ensured they would always be winners.

I’ve been disinherited because they believe I’m undeserving, a shameful blemish on the family’s “good name,” further guaranteeing I will always remain poor and therefore powerless–unless I hit the lottery (which I don’t play) or write a book, which I plan to do. The irony of all that is the book may very well be one that exposes the people who raised me for what they really are.

I’ve always been a risk-averse, avoidant underachiever. My dealings with others have suffered because of my fear of the judgment of other people. I was often bullied as a child and teenager.

I married a narcissistic man and continued to live with him and allow his abuse even years after we were divorced.

Although as an adult I’m no longer bullied (and am Very Low Contact with my ex), people still try to push me around, treat me like a mental defective, leave me out of conversations, overlook me for promotions or raises at work, or just talk over or look through me as if I’m not there at all.

When I say something, people act like they don’t hear me. It’s very hard for me to make friends or fight back when I need to because I was trained from an early age to be so very afraid of everyone. I’m the proverbial shrinking Violet and wallflower–the kind of woman my mother used to mock for being so “insipid.” I seem to have the opposite of charisma.

For many years I walked around as if ashamed to be alive. I carried shame with me like a heavy burden that affected the way I spoke, the way I related, the way I thought (all the negative self-talk and self-hate), even the way I moved and carried myself. I embarrassed myself.

Since I started writing, I’ve learned that I wasn’t put on earth as an example to others of how not to be (I actually used to believe this), but that God gave me these challenges and this life to teach me valuable things about myself–but that waking up to who God meant for me to be was going to be hard painful work. I don’t live in self-pity: my narcissists have been my teachers.

One day I dream that people offline will know who I really am. That I have a personality. That I’m funny and intelligent. That I have opinions of my own, and that I am actually good at things.

But more than anything else, that I have a finely tuned bullshit detector–a gift unintentionally bequeathed to me by my narcissists, and it’s a gift more priceless than any amount of money I may have inherited.