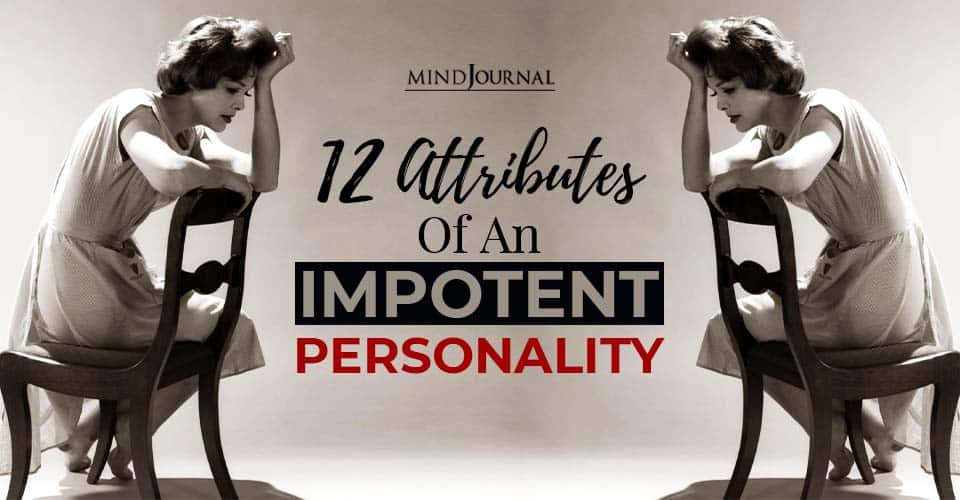 Written By Christine B. L. Adams

Have you ever heard of someone having an impotent personality? It might sound strange, but it’s actually another name for people who are extremely self-absorbed.

We refer to self-absorbed people by different names—narcissistic, egocentric, self-serving, vain, self-indulgent, or conceited. Such people have additional traits that, when taken together, form a distinct personality style. Personality comprises your enduring ways of thinking, behaving, and displaying emotions.

In studying egocentric people for forty years, Homer B. Martin, M.D., and I discovered details of their unique ways of thinking, behaving, and emoting that make up their personalities. We discovered they go through their lives believing unconsciously they are inert and helpless. In our book, Living on Automatic, we refer to this as the “impotent personality.”

We use the word impotent to mean helpless, ineffective, weak, lacking in vigor, and unable to take effective action. We discovered that characteristics of the impotent personality include being demanding, capricious, irresponsible, arrogant, whimsical, and insatiable. Such people have inflated self-worth. They blame others for their own deficiencies and have tunnel vision. Their commitment to relationships is conditional, not steadfast.

What is the core difficulty in the personalities of the self-absorbed? What is the source of this difficulty? Let’s take a look.

When we examined the childhoods of people with impotent personalities, we found that unconscious training, emotional conditioning, teaches the child to be inert. Parents teach these children to expect a lot of assistance from others. Parents overindulge them in various ways. Parents believe the child is incapable and fragile.

They baby them, feeding and dressing them far longer than necessary. Parents do not set limits or establish expectations for personal accomplishments––brushing teeth, doing homework or chores, abiding by rules, doing well in school, and sharing with others. When these children fuss or cry someone immediately attends to them until they are pacified.

These children make emotional and behavioral associations from how parents behave with them. Within a few years, they are emotionally conditioned. Whenever they desire something, they get it. Parents fulfill every request. They emotionally condition their children so that the children expect the job of fulfilling their desires will be done by other people, not by themselves.

The children’s only part of the scenario is to cry, ask, or demand. This emotional conditioning process is similar to how you train your dog to sit, roll over, or beg. It is associational learning.

Move forward in time to adulthood and we see the outcome of this childhood emotional conditioning. It causes impotent personalities with the following attributes. I’ll describe each and describe how it relates to the core difficulty of helplessness.

Here Are The Characteristics Of An Impotent Personality

Impotent personalities demand that others fulfill their desires. This is the only way they are not helpless. They easily raise a ruckus, throw tantrums, threaten, and may become violent. Others work diligently to meet their requests and demands, while the impotent remains inert, doing little or nothing.

When thwarted, impotent personalities demand more and do it louder. This way of engaging in relationships is the only way an impotent knows how to interact because it was the only way he was taught as a child.

Those with impotent personalities change their demands according to their whims. They want something and the next moment demand the opposite. They see no inconsistency in the new expectation. They justify capricious demands by saying, “I changed my mind. I want this now.”

They had such whimsical behavior accommodated in childhood. It becomes a part of their impotently-conditioned role and their helplessness. They believe they are incapable of being steadfast or sticking with one idea or one desire.

Impotent personalities assume a haughtiness in their demeanor. This can be traced to their incessantly being catered to as children. They are also catered to in adult life.

When they expect and demand others do what they want, they act imperious and arrogant. They come to believe they are worshipped and adored because they were as babies and children.

Dr. Christine Adams is responsible for bringing to the forefront the new concept of emotional conditioning and how it creates your personality and shapes your relationships throughout your life. She has been a child and adult psychiatrist for forty years and has helped thousands of people understand their relationship problems or failures. She is also co-author with Homer B. Martin, M.D., of the book, Living On Automatic: How Emotional Conditioning Shapes Our Lives and Relationships, which offers an exciting and groundbreaking new concept of how people relate to one another. Dr. Adams lives with her husband and currently teaches classes on personalities and relationships for The Veritas Society at Bellarmine University, Louisville, KY.View Author posts