How To Manage Bad Behavior In 3 Simple, But Not Easy Steps 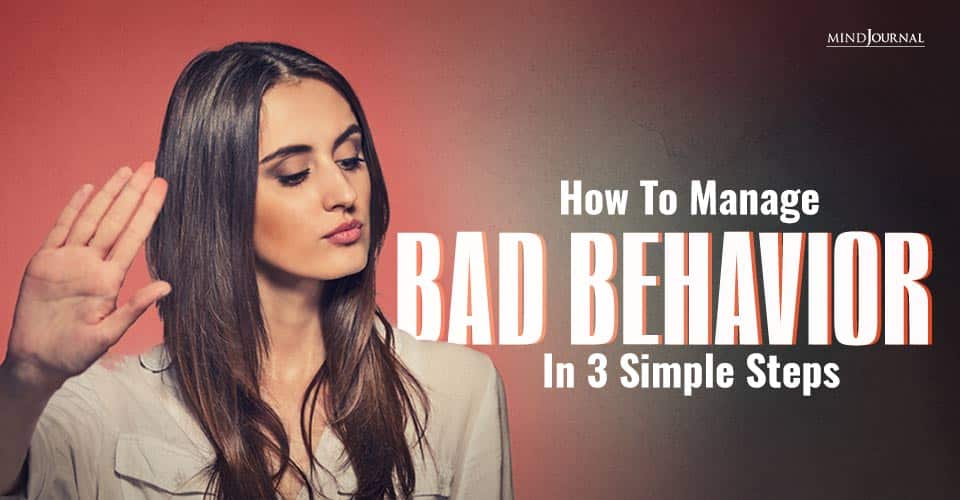 Toxic or bad behavior? How do you label it when someone acts badly towards you?
“Toxic” is used to characterize anything and everything these days. Why?

As Joanna Williams of Spiked says, it’s not a proposition, an argument, or a description. When you label someone as toxic, you are characterizing them in a negative way, giving yourself permission to dismiss, avoid, criticize, etc.

“It is not an argument; it is a flashing siren warning people away.”

We All Behave Badly Often Enough

(1) How am I reacting to the bad behavior?
(2) Describe what it is that you don’t like; and
(3) How do I respond in an appropriate and effective way?

1. How Am I Reacting To The Bad Behavior?

In Jane Austen’s book Emma, a young man pretended to court the main character, Emma. When she found out, she said, “He has imposed on me, but he has not injured me.” Mr. Churchill, the cad, had imposed on Emma’s time, was dishonest, and kept her from being interested in other young men. He did not injure her. She didn’t take it personally, i.e., she did not feel ‘insulted.’

This is a perfect example of how to tell when you are reacting personally to someone else’s bad behavior. Feeling ‘injured’ in such situations harkens back to a younger age; as children, we take everything personally because we lack adult perspective-taking.

When adults do wrong by us (e.g., not being attentive, not showing gratitude breaking promises, being critical, being unkind), remember they are imposing on us, not injuring us. We are not victims. If we act out being injured, 100% of the time we will act badly in return. Thoughtful judgment about how to respond to others needs to be based on the recognition that they can impose on us without injuring us.

Also, read What Is Negativity Bias And 5 Strategies To Overcome It

Once you have taken time to reflect on how you are feeling injured in some way, you can work on defining how the other person has “imposed” on you. You want to describe how the action does not suit you—not that person is “toxic.”

Notice that to say something does not suit you and how it does not suit you is to empower yourself. Given that you have sorted out the personal part, what you like, or dislike, stands on its own. You can act on such preferences.

3. How Do I Respond In An Appropriate And Effective Way?

How do you respond to other people when they have imposed on you? I’ll take a simple example of having a planned lunch with a friend who has kept me waiting for about 20 minutes. My first reaction (which is automatic rather than ‘normal’), is to feel ‘insulted’ (i.e., ‘injured’) by that person’s ‘rudeness.’

I take the time to ‘soothe’ the anger I am feeling and how I am labeling her as being “rude.” I remember the difference between being ‘imposed’ on and being ‘injured.’ Once I do that, I can begin to address the issue of being kept waiting.

Here is my strategy for dealing with the friend:

Also, read 13 Practical Strategies To Handle Being Mad or Angry

Here are the general principles I used in the above example. First and foremost, I act to preserve my own autonomy—I act on my own behalf. I went on with my day; I did not sit and fume about her “rudeness.” I described what the person has done that did not work for me. I am a stickler for addressing other’s behaviors that are not okay with me as actions that “don’t work for me.” “It doesn’t work for me” is a powerful statement of my position without putting anyone down.

I don’t characterize their behavior (e.g., “You are being rude to me by being late”). I described the action, being late or unable to be on time. It takes a lot of willingness and practice to describe rather than characterize or label another person’s actions.

I guarantee that most people do not accept/agree with our characterizations of their actions. At the same time, they cannot really dispute a description of their actions as they affect me. Even though you make herculean efforts to treat other people well, they may react as if you had accused them of some ‘injury’ and react defensively.

Do not lose your cool. Don’t try to explain. Do not undo your good work at managing your own reaction. Just repeat what you have already said, emphasizing that it just didn’t work for you to wait, not that they were behaving badly.

Give Up Labeling People As “Toxic”

Joanna Williams wrote a great article, noting that “we’re all toxic now.” She thinks, ”The fashion of putting toxic in front of everything tells us that there are some who perceive all aspects of life—and especially other people—as not just wrong, or bad, but as actually physically harmful and dangerous.”

Interacting with others, even when they behave badly, is manageable with both an effective approach and the effort to carry it out. It takes courage.