What Is Negativity Bias And 5 Strategies To Overcome It 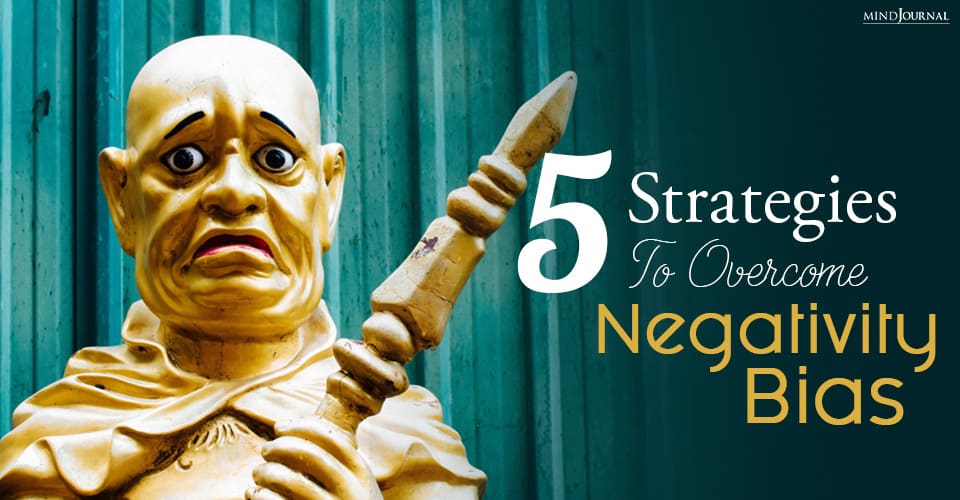 “While the negativity bias is good for survival in harsh conditions, it’s lousy for quality of life, fulfilling relationships, personal growth, and long-term health. It makes us over-learn from bad experiences and under-learn from good ones.” – Rick Hanson

How To Turn Your Negative Bias Upside Down

Do you find yourself worrying or thinking more often about the things that are wrong in your life rather than the things that are good? Or maybe your partner made the bed and took out the garbage for you today but you got hyper-focused on the crumbs left all over the counter?

Turns out you are not just a nag or a negative person, but a victim of the biological phenomenon known as negativity bias. Despite this hardwired feature in our brains, you can learn how to overcome the negativity bias with some strategies to help retrain your brain.

Finding more balance between the negative and positive in your life will not just benefit how you feel but will create more happiness and satisfaction in your work, relationships, and attitude about life.

Related: 10 Ways To Stop Being Pessimistic

What Is The Negativity Bias

The negativity bias is the idea that when two situations of equal significance are experienced or witnessed, the negative situation or comment, will have a much greater significance and stand out in your memory than the positive experience. Psychologist Rick Hanson states that “The mind is like Velcro for negative experiences and Teflon for positive ones.”.

It’s why we might have a tendency to overthink those negative experiences throughout our days and in part, why the news and media consistently report far more about the problems in our world rather than the positive. Research on negativity bias has found that people are far more likely to respond to negative stimuli than positive, something the media and advertisers are very well aware of and use consistently to motivate the public to buy, watch or consume their products.

It explains the rationale for our tendency to work harder to avoid something rather than to obtain something. I spoke about this “function of behavior” in my article on creating positive habits. The majority of what we do is built around the idea that we will work much much harder to avoid something being taken away. Reinforcement (discipline) systems in our schools are set up around this idea as well as much of our social system, (think about your tendency to speed when there is no police in sight).

Case in point, your retirement accounts are up thousands of dollars, and then suddenly you notice it drops, but overall you are still ahead. It’s definitely an “ouch” moment regardless of your experience and knowledge in finance, and for some, despite the fact that you are ahead overall, it might prompt some panic which turns into a call to your financial advisor to make a few changes in your investments.

In this example, we move into defense mode and try to fend off any danger, which is the evolutionary explanation for the negativity bias. It protects us from danger.  Historically, if you are sensitive to the sting and pain of a negative situation, you are in a better position to protect yourself which ensured your chances of survival.

In a similar way, they found that students learn better when teachers had the threat of money being taken away rather than earning extra when they did well.  Or why we are more apt to make a complaint when service is bad, rather than when it is good.

Below is a quick video that explains how our brains are wired for negativity with other examples of how this plays out.

Meredith Flanagan is a Mental Health Professional (LICSW) with more than 20 years of experience as a social worker, educator, therapist, and community organizer. She has worked in a variety of fields such as domestic violence and crisis intervention, developmental disabilities, healthcare, and public education. Among her proudest achievements is being an RPCV (Returned Peace Corps Volunteer), serving in Ecuador and Honduras. She has been in clinical practice for over 10 years and works primarily with clients who battle depression, anxiety, ADHD, PTSD, and Adjustment Disorder. Meredith has been working in the field of public education for the past 7 years and currently holds a position as a Special Education Administrator. Her passion is turning life’s challenges and roadblocks into opportunities and strengths that drive us forward creating new and exciting possibilities.View Author posts