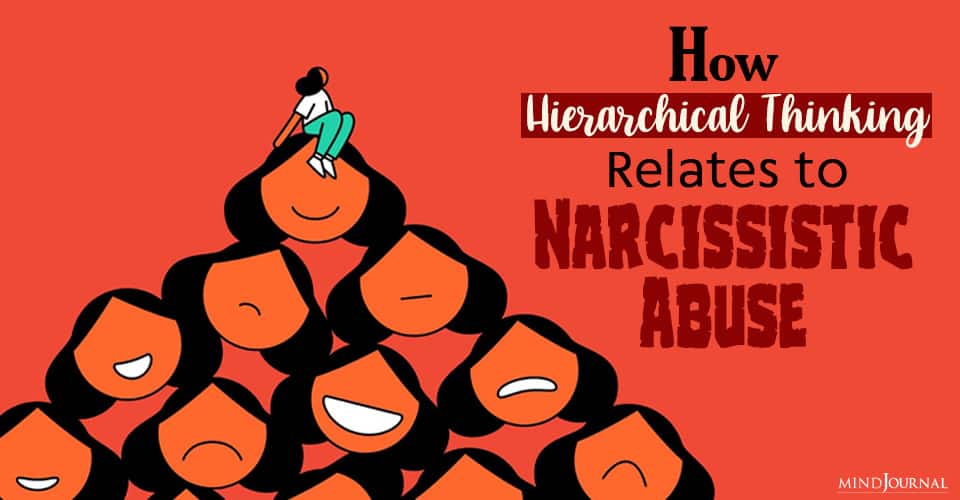 The first thing that I explain is that narcissists construct dominance hierarchies based on whatever status indicators they believe are important. These status indicators can be anything at all, but the most common ones relate to wealth, beauty, social status, athletic ability, intelligence, and education. This is true for all people with narcissistic personality disorder no matter what their subtype.

Once you start to pay attention to the relationship between narcissistic personality disorders, interpersonal relationships, and hierarchical thinking, you will find plenty of examples that were right under your nose all along.

Note: I am using the terms narcissist, narcissistic, and NPD as shorthand ways to describe people who qualify for a diagnosis of narcissistic personality disorder.

Related: What Is Healthy Narcissism? How Does it Differ from Self Love

When you are considering narcissistic hierarchies, here are some things to pay attention to:

Who Do Narcissists Idealize?

People with NPD automatically idealize virtually anyone who they consider to have higher status than they do. They will appear to truly care about these people, but in reality, they mainly care about the person’s place in the narcissist’s favorite status hierarchy.

Bob, an exhibitionist narcissist, treated his boss Samuel at work as if he were his favorite person in the world. He sent cards and little gifts for Samuel’s wife and his children’s birthday. He often went to lunch with him. They became so close that every Summer Bob was invited to spend a week at Samuel’s family beach house.

If you asked Bob about Samuel and his family, he would tell you how much he loved them and what great friends they were. That is why we were all so surprised that when Samuel was moved to a different department where he had less status, Bob never mentioned him again. He stopped having lunch with Samuel, stopped buying gifts, and dropped him as a friend.

Suddenly, Bob started treating his new boss Richard the way he used to treat Samuel. Now Richard’s wife and children received the thoughtful cards and gifts that used to go to Samuel’s family.

When I asked Bob about this shift, he didn’t see anything surprising about his behavior. He simply took it for granted that he would only befriend those people who he saw as above him in the pecking order. When Samuel’s status dropped, Bob automatically dropped him.

Who Do Narcissists Devalue?

Narcissists treat people who they view as below them in status as inconsequential losers. Most people with NPD will feel free to ignore or devalue them. This includes lovers, spouses, friends, and family members. If they are nice to them at all, it is usually because they are in a good mood and it feeds their self-esteem to be seen as generous or kind.